You know lah, ah beng go clubbing already (yo ah yo), hungry must find place to eat. And Thohirah opens 24 hours and has a carpark beside it… which has an edge over its competitors, since people don’t have to walk far. It is of course famous for its prata and so I ate the noodles. 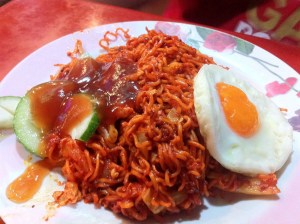 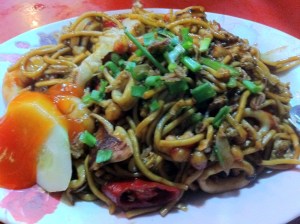 Seafood noodles
The Maggi Goreng was horrible, didn’t have any taste except spicy-hottness. The seafood noodles, on the other hand, tasted like a decent hokkien mee but less tasty because they don’t use lard.
So the next morning, after supper, I went to buy the prata to give it a second chance: 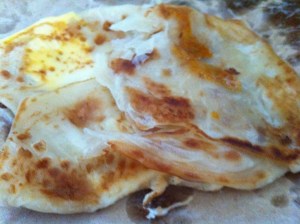 Before I say anything, if you notice my food habits, I love Indian food but I avoid prata because I think it tastes the same everywhere. People say this prata nice that prata nice and when I tried them, I was, ok lor. Not worth the calories. But this plain prata was… out of the world good! It was very crispy and there was a sweetness on its own. If you dip it in the slightly sour and slightly spicy curry (which is how I like my curry), the mixture of taste bursts in your mouth. Definitely worth the 1000 calories per prata.
The egg prata was less crispy but was thick and soft and warm. Also very delicious.
Aiya, you know about Prata Shops lah…where got service one. If you can get the waiter to notice you, then you should be lucky already. Why people complain so much?
Thohirah Restaurant
258 Jalan Kayu
T: 6481 2009
Rating: 4.2912/5 stars