Here we go again! Counting down to the best food we have eaten in 2016, starting with Best Desserts of the Year. The desserts in 2016 seem to be rather safe, focusing on the freshness of the ingredients, rather than innovation. If there is any innovation, it is when pastry chefs use new ingredients on traditional desserts to create a familiar yet refreshing twist.

These are the best 10 desserts we have this year:

GARLIC CAKE!!! 😱😱😱 When I heard that Pine Garden, the bakery that brought us the famous lychee martini cake, has come up with a GARLIC CAKE, I just had to try it! When you open the cake box, the aroma of garlic hits you. It's paired with a dense dark chocolate sponge cake and seasalt caramel. Kinda weird. Pungent, bitter, salty, sweet. The flavors take some getting used to and it's my least favorite of the 3 cakes, but it's not bad. My favorite of the 3 new flavors is the BLOOD ORANGE PROSECCO CAKE. It's kinda like their famous lychee martini. I like that you can taste the alcohol. They also converted the Chinese dessert, MANGO POMELO SAGO, into a cake. It's not just a mango cake, you can taste the bitterness of pomelo. I really like Pine Garden's creations because they think outside the box. They got rid of the notion that cakes must be sweet, and they added new dimensions—savory, pungency, bitterness—into cakes. What a novel idea!

A post shared by Rubbish Eat Rubbish Grow (@rubbisheatrubbishgrow) on May 5, 2016 at 1:46am PDT

Best known for their lychee martini cake, Pine Garden, a small bakery at AMK, has continually come up with very creative cakes, often combining savory food or alcohol in cakes. For examples: a pungent  garlic cake and a blood orange prosecco cake. Recently for their Christmas offerings, they have salted egg yolk chicken floss log cake  and miso caramel ramen logcake. They think outside the (cake) box and got rid of the notion that cakes must be sweet, adding new dimensions—savory, pungency, bitterness—into cakes. What a novel idea! 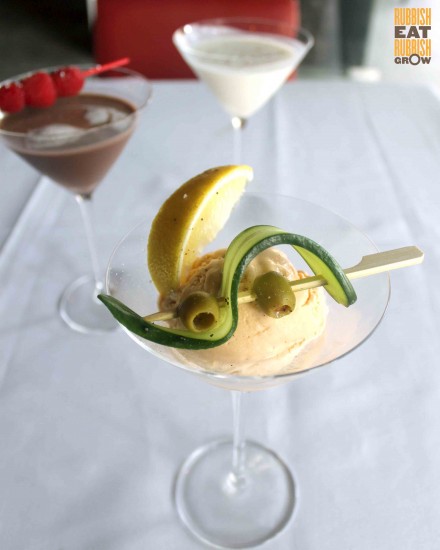 With the move from Haji Lane to Hotel Boss at Lavender, The Ice Cream Man rebrands to TICM Gelato Cocktail Bar. The focus shifts away from ice cream to gelato cocktails. The bloody mary, my favorite, has savory Worcestershire and spicy Tabasco sauce, but it enters the mouth slightly sweet, leaving a tingling sensation. Complex and fun. Faithfully Yours is similar to liquid After Eight mint chocolate laced with vodka; Nuts About You is vodka with peanut butter gelato; and Got Wings is a pick-me-up, with redbull gelato. There is also an Earl Gray cocktail that I’ve yet to try.

Indian cuisine isn’t known for their desserts, but Jalebi ($19) and mango kulfi ($19, mango ice cream) are excellent. Jalebi is deep-fried fermented batter spirals soaked in saffron sugar syrup and a cinnamon-y milky soup. On their own, the two desserts are missing something, but if you combine both of them, they have textures and varying, pleasing sweetness. That said, Yantra has rebranded to Yantra by Hemant Oberoi, and I haven’t visited their new offerings. 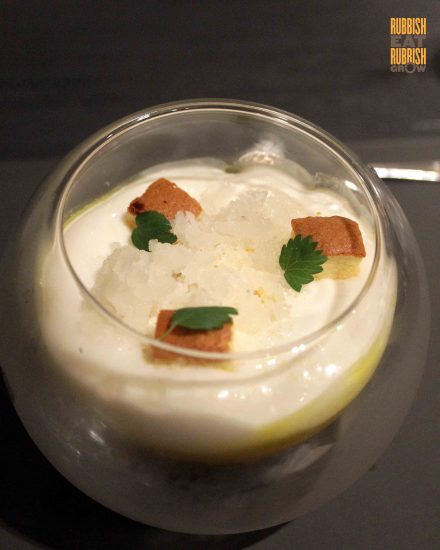 After I blogged about the Michelin-starred restaurant, my BFF Paul visited it, and he scolded me for the recommendation. He said, “All 6 courses have truffles, no variation! And we waited so long between courses.” But I stand by my review and besides, they reinterpreted the pina colada cocktail into a dessert: Pineapple gazpacho, coconut ice cream, rum espuma, 3 tiny cubes of crispy white chocolate cake, and granita to mimic ice. The deconstructed pina colada is fun as it is tasty. 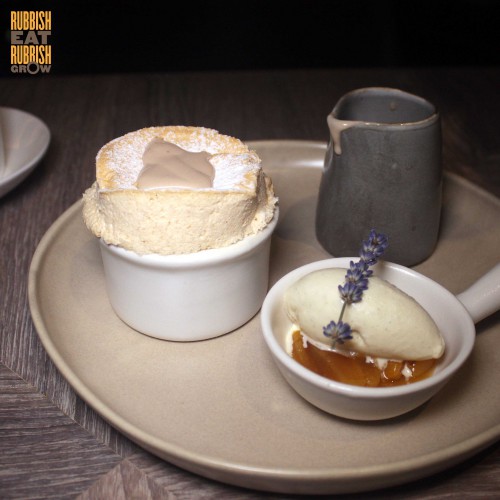 The view isn’t the only good thing about the restaurant which serves subtainable Meditterean cuisine. Usually souffles come in vanilla, or chocolate, or passionfruit. The original dessert, apricot and lavender souffle ($20), is something I’ve not seen before, and the intense sourness of apricot and the perfume-fragrance of lavender is rather interesting. I like it very much, but I can see how others who dislike sourness or fragrance may not appreciate it.

Award-winning chef Tetsuya Wakuda presents Patisserie Platine by Waku Ghin at RISE Lounge at the lobby of Marina Bay Sands hotel, offering 18 types of small cakes. They are priced from $10++ to $12++. The three cakes we tried, really tiny, are ethereal like a dream. We recommend the Ghin cheesecake ($12), more like an reinterpretation of a lemon tart than a cheesecake; and coconut mousse with mango and passionfruit ($10), which reminds me of a summer breeze.

#3. Cakes from Mad About Sucre

In addition to their cakes, they have now a savory menu to complete your meal. Both savory food and cakes use seasonal ingredients and change according to the freshness of the ingredients. There is so much heart, personality, passion, and love, all of which are translated into the food and pastries. Hopefully, you’ll be moved to tears like I did. 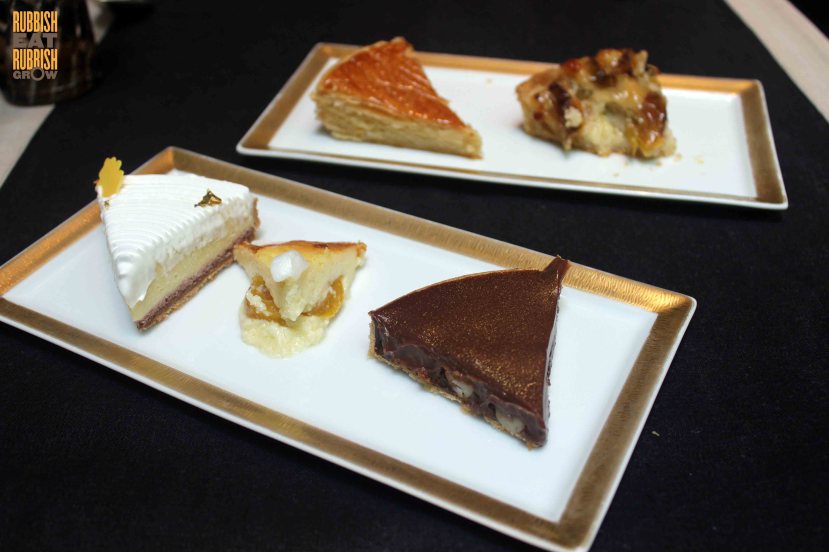 The only 3-Michelin-starred restaurant in Singapore serves a perfect meal, ending with perfect desserts by pastry chef Antonio Benites. It’s not easy to make a whole trolley of desserts for the gueridon service. We tried several desserts, and they are mostly good. But the chocolate tart, with liquid dots of gold, stands out. It’s a simple tart, but it gives such orgasmic pleasure. I closed my eyes when it swirled in my mouth. Ah!

Esteemed Straits Times food critic Wong Ah Yoke said that it’s best that the talented Pastry Chef Tammy Mah of Meta leaves molecular cooking techniques alone; I couldn’t disagree more. Her creations are innovative and delicious. The golden ball of cheese cake splits open to drip a bleeding heart of blood orange coulis. The cheese cake itself is soft as a dream. Both in appearance and taste, it is a fairy tale, like the golden ball in “The Princess and the Frog.” This is my favorite dessert of 2016.