I have a deep love for the three chefs who started Park Bench Deli, the people behind this relatively new cafe 1KS along Keong Saik Road, The Daily Rounduptaking over the space of . Although I don’t know and haven’t met the trio, I like their passion which comes through their sandwiches.

They wanted a good, nasty, wicked sandwich after their job hours, and when they couldn’t find a satisfactory one, they made it themselves. They become selling the sandwiches at pop-ups and food trucks, learnt how to make their own pastrami and pickles, and tried 50 recipes for fried chicken. Although they are styled as an American deli, they do modern interpretations of sandwiches and stick to their original philosophy of making bold, hearty, who-cares-about-heart-attacks sandwiches.

EPIC. Ordered these super delicious sandwiches for my family, while we watched @GameofThrones. 🐉⛵️💥⚔☠ (those icons basically sum up the episode.) 🍞 🧀 🍼 Anyway, the cheese beef is so rich and buttery, I absolutely adore it! Washed down the richness with milk. 🍞 🧀 🍼

Having ordered their sandwiches for delivery in Jun 2016, I had fond memories of them. Just look at the instagram photo! It’s so cheesy! I had high expectations going to 1KS but unfortunately, they weren’t met.

One of the things that confuses me is Park Bench Deli and 1KS serve similar menus. Why? If they are similar, why not just call 1KS “Park Bench Deli”? I was expecting something new because it is a new shop with a new name. Even PizzaExpress, a worldwide pizza chain, offers something different in their restaurants.

The sandwiches are still quite good but they are not as good as Park Bench Deli’s. You can easily tell from the photos. Both the instagram photo and the photo above show their cheese steak sandwich ($17, beef brisket, molten cheese sauce, and caramelized onions), but the instagram photo looks so much richer, dripping with cheese, whereas the one we ate at 1KS was not cheesy enough. 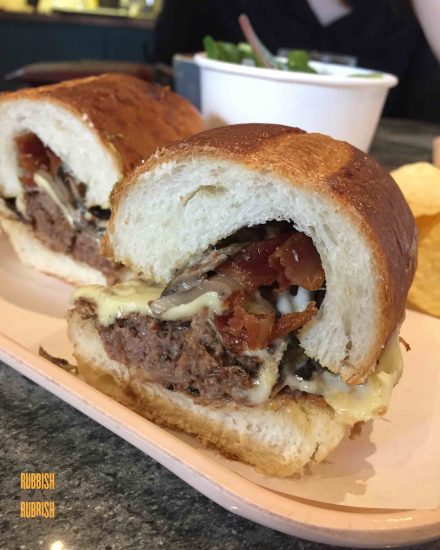 Their buns are always fantastic, crusty and soft but doesn’t turn soggy even when holding a lot of ingredients like the short ribs swiss ($20) consisting of mustard aioli, braised beef short rib, sauteed mushrooms, crispy bacon, and cheddar. The flavors work well together. 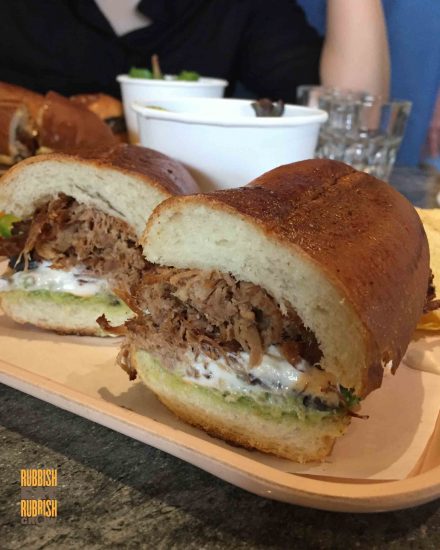 The carnitas tortas ($17), which of course is inspired by tacos, consists of pulled pork, black beans, guac, ricotta, and chipotle mayo. Again the flavors are wonderful but the the pulled pork is dry.

The service here is great, by the way. The sandwiches pass muster but they are just not as great as at Park Bench Deli. I also do wish they can come up with some other sandwiches and not do the same thing as Park Bench Deli. We paid $59. Quite a good price.