Turning one year old, Spice World Hot Pot at Clarke Quay celebrates their anniversary with several new dishes added to the menu. Spice World Hot Pot, which hails from Chengdu, specializes in Sichuan-styled hot pot. It currently has over 600 outlets globally, including New York and Sydney. David Cameron (Former Prime Minister of the United Kingdom) and Orlando Bloom (Legolas in Lord Of The Rings) reportedly are fans of this establishment. In fact, Mr. Cameron liked the Pork Meatball with Coriander so much that he ordered a second helping and the name of the dish has since been changed to Prime Minister’s Pork Balls in honour of him.

The restaurant serves different variations of mala soup bases: spicy butter, cane pepper pot and even spicy frog broth. For the non-spicy eaters, Spice World Hot Pot also offers more “harmless” soup bases such as tomato broth, mushroom both, pork belly and chicken broth, pig stomach and chicken broth and three-delicacy (pork, chicken, duck) broth. Each broth costs about $9.90 to $19.90 (with the exception for the spicy frog broth which will set you back at $58!) and you can choose two or three different kind of soup bases in one pot. 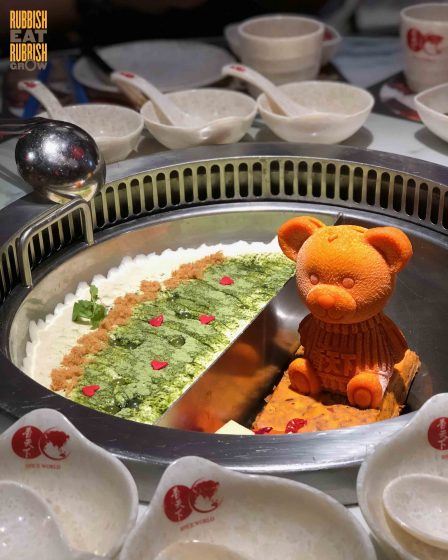 We sampled the latest addition to the menu – Ying-Yang mala and bubble milk tea hot pot set ($39.90++). The bubble tea hot pot, initially introduced as a guest item in the menu, is now a permanent fixture after garnering positive feedback from the regulars. A layer of milk foam sits atop of the matcha milk tea broth, scattered with matcha powder, heart-shaped candy and mango pearls.

Before tucking in, we were instructed to have a sip of the warm bubble tea. The milk foam is salty and thick; the matcha taste in the milk tea is a tad underwhelming – understandably so as it is not meant to overpower the taste of the ingredients to be cooked in it. 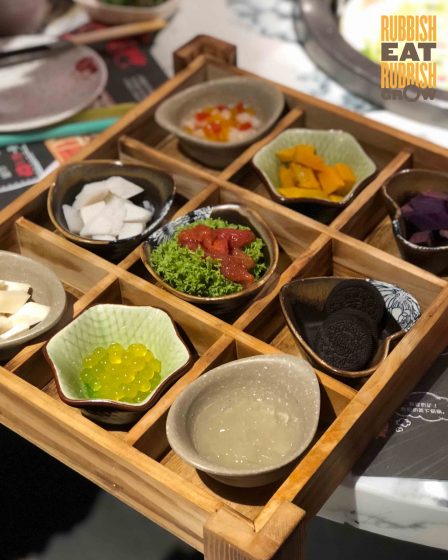 The bubble tea hot pot also comes with a platter that does not look out of place in a bubble tea shop; it consists of sweet and savoury items such as purple sweet potatoes, premium Chinese yam, pumpkin, oreo cookies, colourful fruit jellies, mango pearls, beef slices and bamboo shoot.

The natural sweetness of the sweet potatoes and pumpkin complements well with the mildly sweet milky broth. It feels like I’m having dessert before my mains. The beef slices being cooked in the milky broth, on the other hand, is nothing to write home about. I couldn’t taste the beef nor could I taste the matcha milk tea; the texture is almost gelatinous.

For the mala broth, watching the Teddy Bear spicy butter ($9.90++) (shaped out of mala soup and beef oil) melting slowly into the broth makes me feel sorry for poor Teddy. But his sacrifice is worth it. The concoction of fiery dried red chilies, tongue-numbing Sichuan peppercorns and beef oil makes it a flavoursome and satisfying broth to swish-swash thinly sliced meat in. Do note that they have limited quantities of Teddy, so do make orders in advance if you do not wish to be disappointed.

If you are at Spice World Hot Pot and you do not order premium Barbie wagyu beef ($38.90++), then why are you even here? I kid. But seriously, as gimmicky as it may sounds and look, the excellent marbling of the thin wagyu beef slices lends the meat a rich, beefy flavour and pairs well with the mala soup base. 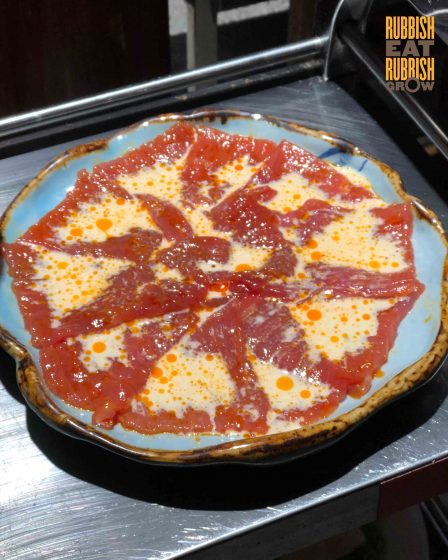 Another meat item would be the milk tender beef ($15.90++). Beef sirloin slices are being marinated in milk, which gives the meat a melt-in-your-mouth texture. 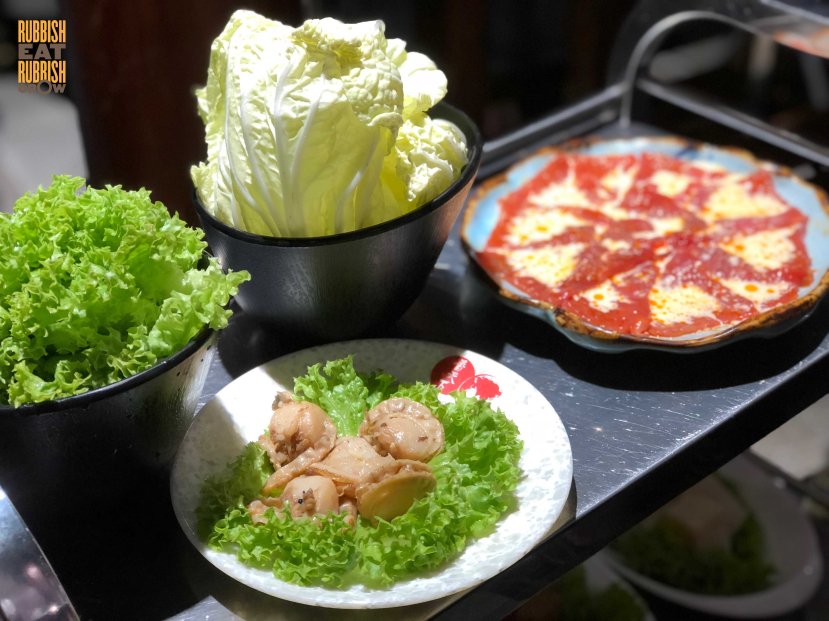 Apart from the meat items, the scallop marinated in 16 herbs and spices ($19.90++) is also decent. I may have made a mistake of cooking the sustainably sourced scallops in the mala broth as I could only taste the spicy broth and nothing else. The scallops are, however, fresh and firm. A little too pricey for my liking.

The bacon golden mushrooms or enoki ($16.90++) is a beauty. Almost like a bouquet of bacon flowers when presented to the table. It is also a new addition to the menu. For those who doesn’t like coriander, please stay away from this dish. For those who do, the coriander gives the ubiquitous bacon enoki combination an extra oomph. Bright flavours and good texture, this item works surprisingly well for both soup bases (matcha milk tea and Teddy).

All in all, putting aside the gimmicks, the food here is fresh and of quality (but pricey!). Also, a great supper option to have after partying the night away as it is open till 6 am on Fridays and Saturdays. However, I do smell like mala when I got out of the restaurant. Well, it might not be a bad thing for mala lovers after all.