Kamome Bakery at Novena Goldhill Plaza is a popular Japanese bakery whose Japanese boss starts work at 4am for 6 days a week they are open. For Japanese food enthusiasts, you may, like me, recognise “kamo” means duck. Kamome means seagull! Cute. I wonder if the boss names her shop after Jonathan Livington Seagull, a popular book in Japan, about a seagull who is unwilling to conform and strives to be the best flyer.

The pricing of the buns here is quite bad, but the guy in front of me bought $50 worth of buns. There are people who are willing to spend. When we were there, these buns were sold out by noon.

I bought Tiong Bahru Bakery’s french loaf a few weeks before this. And Kamome’s version is much better, fluffier and softer, and half the price. TBB’s version is so rock-hard that I have to exercise my double chin into chisel-sharp jaw. I spent a lot of effort to cultivate my double chin, please don’t rob that away from me. But to be honest, although Kamome’s  version is better, the crust is still too hard. Am I backward and uncultured if I admit that I still prefer Delifrance’s french loaf? 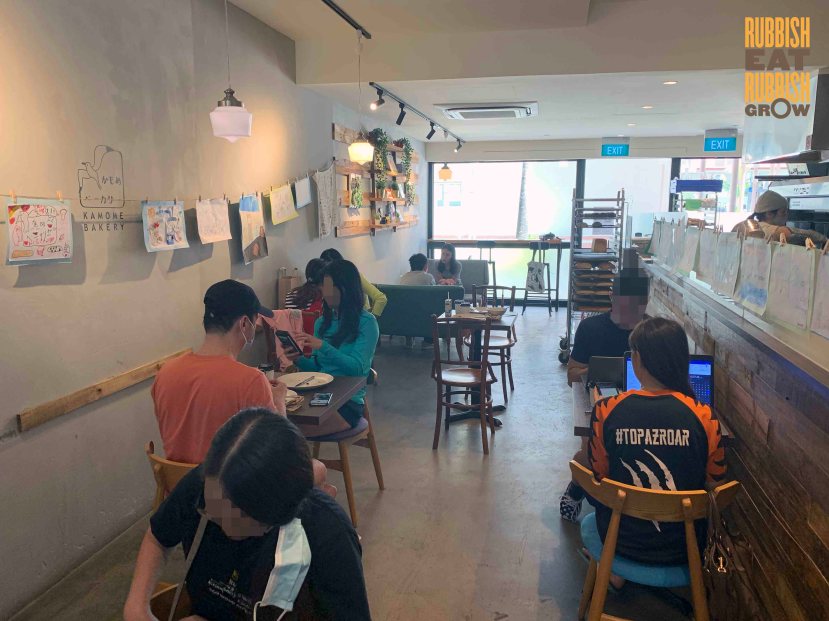 Kamome Bakery also has a sitting area with only about 8 tables for dine-in menu (see below for menu). It is a limited menu of soups, burgers, and sandwiches. They come with a drink. The coffee is their own blend of 4 beans and if you ever have coffee in Japan, the coffee here tastes like that. It’s mild, no bitterness, and smooth—which I like. But many Singaporeans would complain that it doesn’t have a “strong coffee taste, doesn’t taste like coffee.” I’m quoting my friends. 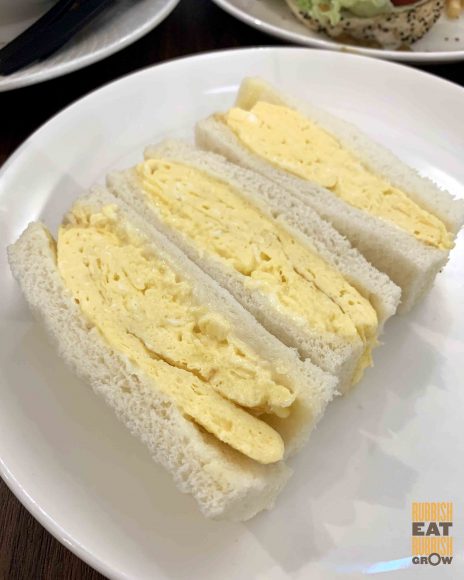 It’s a relief that the fluffy egg sandwich ($10.90) lives up to its name. The egg and white bread are soft as clouds, but it is a little bland. Nothing salt and pepper couldn’t solve. We asked for them, sprinkled some on the egg, and it was great. But… I don’t know if I will pay $10.90 for eggs again.

The beef stew is slightly sweet with tomato but what is unique is that they use carrot and daikon (white radish) instead of carrot and potato. The apple-like texture of daikon is interesting after it absorbs the stew.

Along with the stew, we are given two types of sliced baguette: a plain and a dried-fruit-and-nut. The latter is too strange to pair with the beef stew although the plain one is delicious.

The avocado wasabi burger is nicely done. The special thing about the burger is the sauce: there is some wasabi but the dominant taste seems to be teriyaki and salt. My partner found the sauce too salty but I was okay with it.

While we were eating, we observed an oversight in their service. People were queuing outside the shop to dine-in but some customers just walked in and grabbed a table without queuing. This was because the small shop was soooo crowded. There were at least 20 people in the small frontspace where the buns were displayed. Some customers took advantage of the messy crowd to cut queue to dine-in.

Furthermore, they definitely contravened COVID regulations. There were so many people. The bakery has been around for more than a year so there is no excuse for the service oversight.

The situation could easily be solved. Just station someone standing at the door. Ask customers if they are buying buns or dining in. Let those dining-in queue in one queue, and those taking away in another queue. Allow only one member of the family to enter the shop! Not the entire family of four. CROWD CONTROL.

If I was queuing outside for a table and I saw people taking advantage of the confusion to cut queue and steal a table, I would be so pissed off.

But since nobody cut our queue, we were quite happy with the food. We spent $45 for two persons for dine-in, a good pricing, but if you’re buying the buns, they are pretty expensive.