One of the food writers informed me that Atlas Coffeehouse at Bukit Timah is one of the best cafes she has visited this year, with the disclaimer, “but it’s also near my place lah. Maybe that’s why I think it’s good.”

Atlas Coffeehouse is opened by the people behind the now defunct Assembly Coffee, and their experience has put them in good stead. You can tell from the first impressions how experienced they are.

For instance, the decor is the hipster cement-and-marble, even the plates are marble, making it instagrammable, appealing to the youth. Yet, at the same time, they don’t want to be that generic, so they added touches of Prussian blue on the feature wall and in their logo. The Prussian blue and the waves in the logo combined to give off an almost Japanese feel, similar to the most famous Japanese art piece, The Great Wave off Kanagawa.

Even the menu demonstrates their experience and their Japanese sensibility. It’s an elegant one-page menu of 8 mains and 4 desserts, with some ingredients repeating in dishes to cut costs.

Now the food. It is not bad, but not exactly inspiring. The Atlas Super-bowl ($18) is one of their bestsellers, but this is something I often cook without much fuss at home. It’s just a quinoa salad with spinach, sundried tomato, baked squash, zucchini, shimeiji mushroom, and peanut sesame pulled chicken—all these ingredients are what I throw into my salad when I make it 3-4 times a week.

The salmon soba noodles ($18) is something I often cook at home too. It’s pan-fried salmon with soba in a sweet sauce. The salmon, I guess, comes from a deep-frozen source, the kind that has been frozen for some time, so the quality comes off badly. I bought a deep-frozen salmon once to cook at home, and never again.

The creamy mushroom on sour dough ($14), with additional scrambled eggs (+$3), is white wine mushrooms with parmesan cheese on toast. It tastes like that lor. Should have gone for the beef brisket on sourdough ($20) 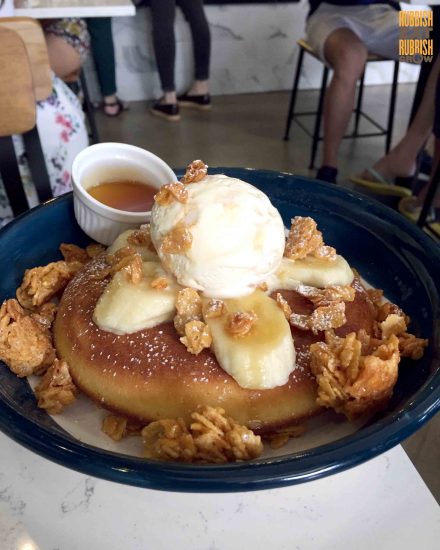 The butterscotch banana pancake ($18.50), which putatively takes 20 minutes, arrived on our table within minutes of ordering. It is really more like hotcake, than pancake. In fact, it’s more like sweet yellow pound cake. It comes with caramelized banana, butterscotch, and honeycomb ice cream. The overwhelming flavor is sweet, sweeter, sweetest, without any variation. Should have gone for the candied bacon waffles ($14.50).

While the food is acceptable, their coffee is quite strange. It’s not terrible, but it is unusual and takes some getting used to. It’s green, with a long burnt finish. I can’t make up my mind whether I like it or not.

On the whole, Atlas Coffeehouse knows what it’s doing. The staff handles the crowd well, and they are young, energetic, friendly, and enthusiastic. I wouldn’t call it the best cafe of 2016—South Union Park is still my #1—but it’s good enough. With no GST and no service charge, we spent about $23 per pax for four persons, including a beverage each. Not a bad deal.