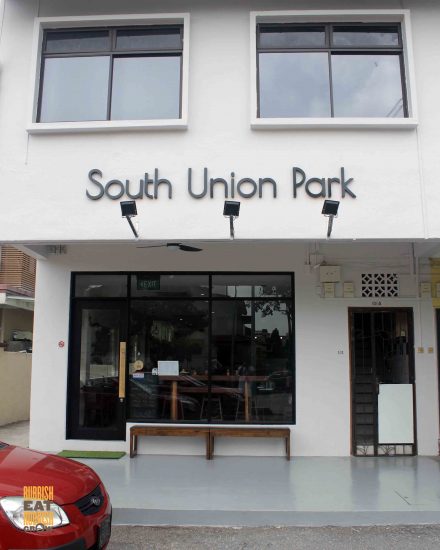 With the exception of fries and ice cream, they make everything themselves from scratch, including buns for burgers, homemade pastas, and chorizo. All cooks at South Union Park are graduates from Culinary Institute of America, so they wanted to recreate an idyllic cafe with California feel. Actually, just smoke weed lor. That’s California feel. Haha.

My informants are right: the food is good.   I like it that they are not afraid to be heavy handed with a dominant spice. For starters, the menu writes “crabcakes” ($12) but it’s just one big piece. It’s distinct with lemongrass but pity about the thick crust.

They are not afraid to go heavy with the marinade with fried chicken ($11); the chicken is a tad salty on its own (which I don’t mind). When you dip the chicken in the HONEY BUTTER SAUCE, all kinds of flavors enter: rich, sweet, salty. Super delish. (By the way, I heard from my friends who like kpop that butter honey is very popular in Korea. South Union Park is so fashionable. Haha. By the way, park here means garden, not the Korean surname, ok? Haha)

A pity we didn’t try the Spanish-inspired starter, South Australian mussels in Chorizo broth ($18). They smoke their own chorizo, and this dish would showcase Chuah’s experience in Spain where he worked at the then 3rd best restaurant in the world.

For mains, the cheeseburger ($21), with buns they bake themselves, is nicely done; pink within, aromatic with rosemary herb, and slightly sourish (vinegar?).

But the stars are really the homemade pastas. Although I find the meats for pastas gamy—they should check with their suppliers—the short rib ragu  ($22, above) has a good portion of meat in a tangy tomato sauce; and the duck confit tagliatelle ($19) is nutty from hazelnut cream with a tinge of sour. 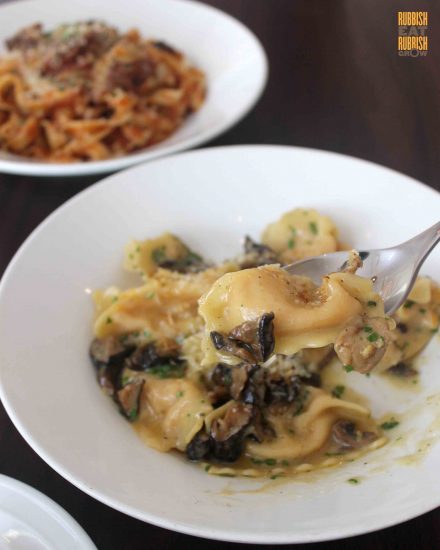 Beside the fried chicken, the other must-order dish is the handmade butternut agnolotti ($17). The skin is soft and breaks easily in the mouth, bursting out a buttery, cheesy, sweet molten of butternut. Such richness is undercut by the lovely earthliness of mushrooms.

The desserts are on the sour side, refreshing after a meal, but need some improvement. The passionfruit souffle ($13, above) is fluffy and competent, but something is missing. Perhaps a scoop of ice cream or cream to accompany it. The apple crumble ($10, below) is equally tart; the butterscotch is lost.

On the whole, South Union Park is a superior cafe. The menu is limited and six of us ordered most of the interesting items on the menu already. But perhaps less is more; few but delicious items. I won’t be surprised that by the end of the year, when we write the Best Cafes of 2016 List, South Union Park will top the list. We paid $25 each.