旺旺! To usher in the year of the dog, we present these choices for your enjoyment. This is a little early, but gong xi fa cai! And don’t you just love CNY? It gives you another chance to make new year resolutions. But before you diet, you need to have energy to do it. So eat! 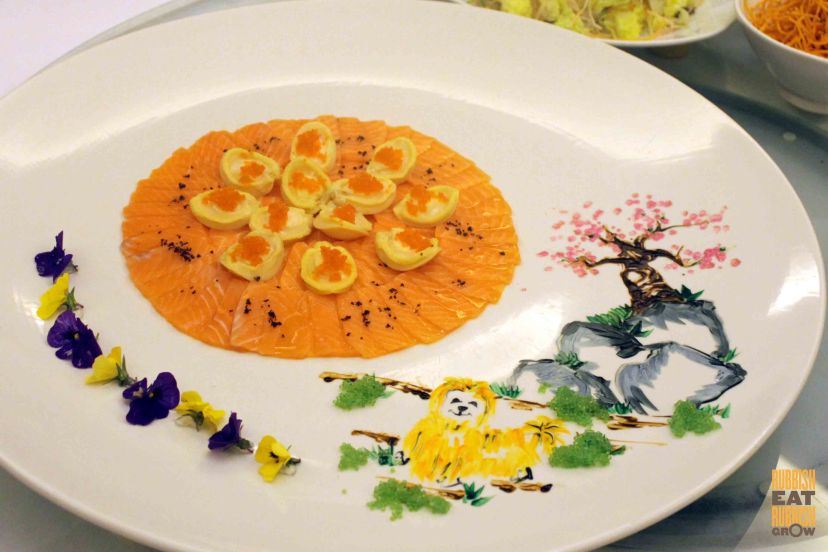 However, their yusheng is only available for dine-in. Master Chef Chan Hwan Kee 曾繁基 of Min Jiang at Goodwood Park has painted a Pekingese at the foot of the mountain with cherry blossoms. The raw salmon and abalones topped with tobiko represent the sun. This is the best yusheng I’ve eaten this year. The vegetables of yusheng at other places are shredded in clumps, but here, the vegetables are fine and distinct, giving a much better bite.

This Prosperity Salmon and Abalone Yu Sheng is only available at Goodwood Park outlet at $168++. 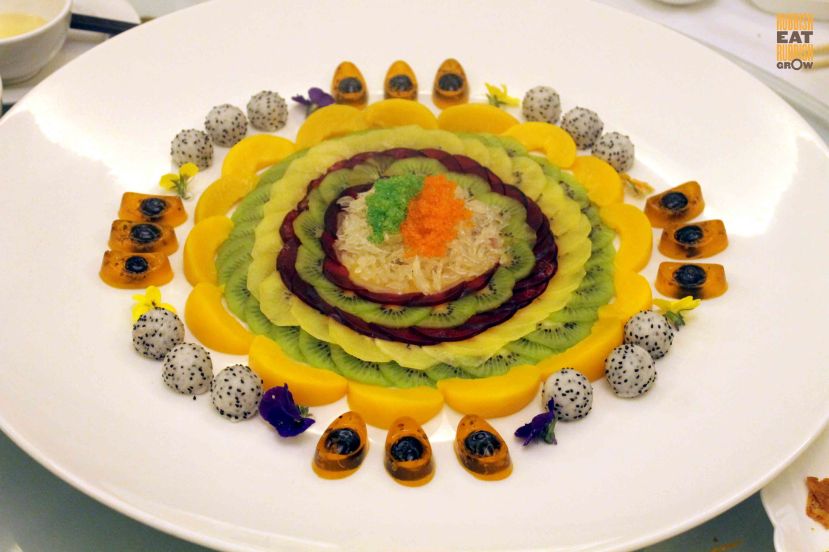 Min Jiang at One-North offers Fruits of Fortune Yu Sheng ($88+ small portion, $138++ large). The fruits, including peaches, plums, kiwi and golden kiwi, are arranged like a flower. In the middle is a mound of pomelo, wasabi tobiko and red tobiko. They are topped with two sauces, Japanese sesame and plum. It’s a rather innovative take on yusheng but we still prefer the usual one. 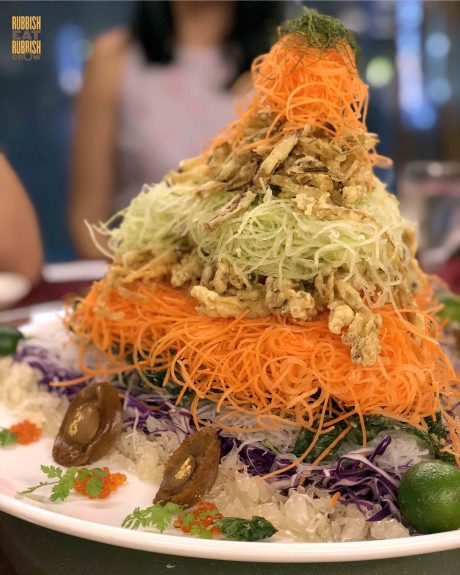 Chef James Wong with 40 years of culinary experience presents 6 to 8 course menus from $338++ for a table of 4-5 diners, to $628++ for a table of 9-10 diners. It is inclusive of free-flowing red date tea and soft drinks, alongside Lunar New Year carrier bags with red packets and mandarins. 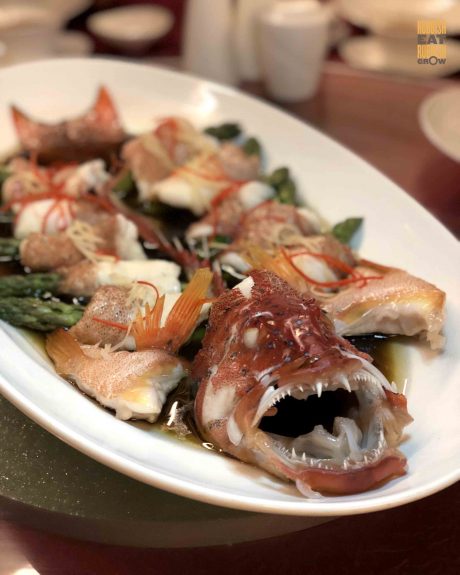 I love how the Yusheng comprises of stacks of vegetables into a mountain. It’s CNY! Let’s be extravagent and pile everything on. Besides the gold-dusted abalones and home-made sauce, what is special about this yusheng is that it includes kaffir leaves and enoki mushrooms to give the dish a nice crunch. 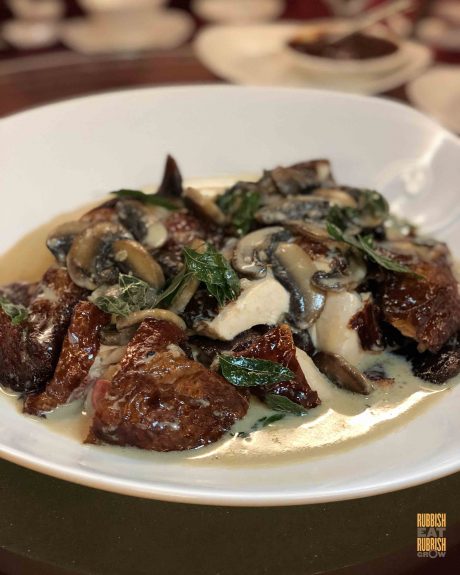 Other outstanding dishes here include Superior Braised Shark’s Fin Soup with Crab Meat and Homemade Stuffed Crab Claw; Steamed Whole Red Garoupa in Superior Light Soy Sauce which is deboned and flesh is curled around asparagus stalks, making it easy to eat for young children and elderly; Golden, Crispy Chicken with Fresh Button Mushroom in Cream Sauce, which is really like a 2-in-1 of chicken and mushroom soup; and Tiger Prawn Toast topped with salsa. 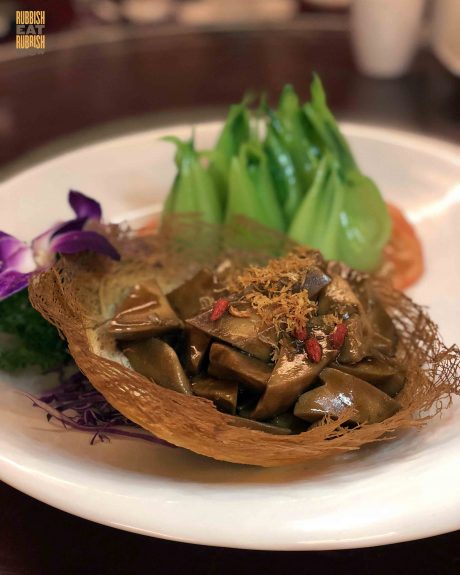 I thought the food here is fun and thoughtful. Much heart is put into each dish to transform a traditional recipe into something new and interesting.

Haven’t been back to Ellenborough since its renovation. It is now very pretty with a Peranakan pastel as a theme. For CNY, they serve both buffets and dine-in. For buffets, it includes a platter of yusheng per table (lunch $68++ child $34++; dinner $80++ child $40++). I tried some of their buffet items, and their Peranankan dishes are great, including their kueh dadar whose skin is made on the spot. 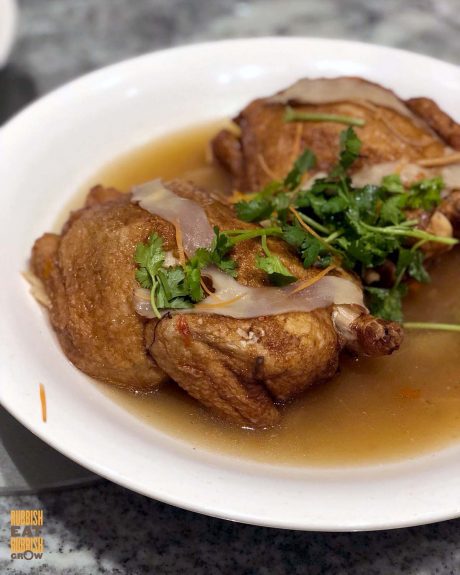 There are two dine-in menus, both for a table of 10: 7 courses at $788++ and 8 courses at $988++. Both menu includes yusheng, but the design may be different for every table. If you have a specific design in mind, it’s beside to contact the hotel days before your meal.

Here, the dine-in menus stick to traditional, familiar dishes such as fish maw soup, imperial herbal chicken, braised abalone and sea cucumber with Australian broccoli (my favorite dish among all), and hasma. 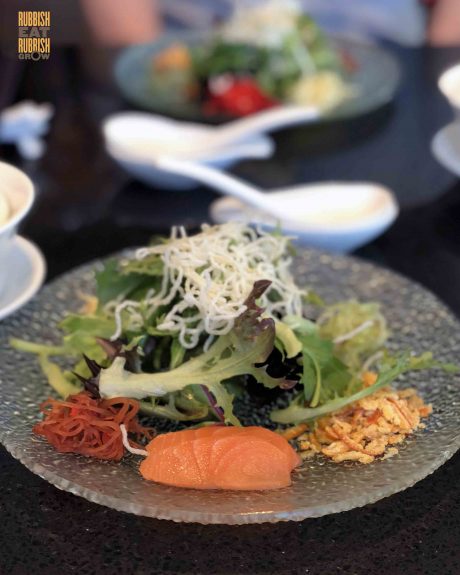 What is unique about this high tea, which I call an adult’s high tea, is the inclusion of tea-based cocktails crafted by Anthony Zhong, the co-owner of Shin Gi Tai. (Si Chuan Dou Hua is known for their extension collection of tea, so it makes sense to leverage on teas.)

Most of the high tea items are dim sum. I especially like their siew mai or steamed prawn and scallop dumpling, very sweet with seafood. Their glutinous rice is like a sandwich, diced chicken in between two layers of soft sticky rice.

The high tea is an elegant way to celebrate CNY; you won’t get too full and can still eat a light dinner.