Wanton, Seng’s Noodle Bar at Amoy Street has been around for almost three years. But its origin is longer than that; it’s an offshoot of Seng’s Wanton Mee at Dunman Food Centre, established in 1968. 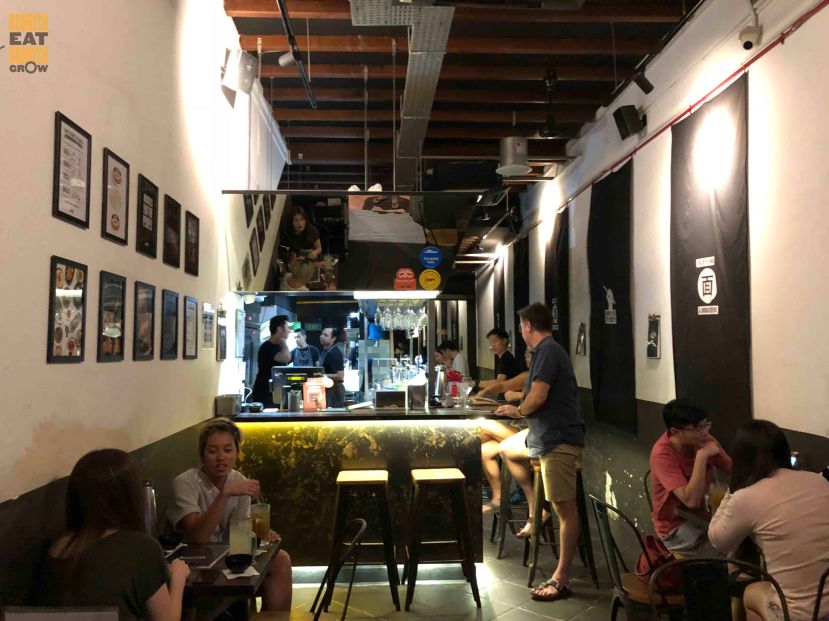 For dinner, the menu goes a la carte. So you can mix and match as you wish.

The $1 bowl of noodles comes rather plain, with minimum dressing. I think it is simply tossed with some shallot oil? You can add the condiments on your own, condiments which include the free-flow of lard, and the wonderful chilli sauce which is first sweet then fiery.

The soup, which is in a metal flask, is also free-flow, but it tastes simply like water boiled with soy bean. I guess it is more for loosening up the noodles should they dry up and stick together rather than drinking for pleasure.

My only grouse is the portion for the noodles is quite small. I could finish it in three bites.

The kailan ($10) is said to be their specialty, and it is not a slight at all. It’s wonderfully cooked, crispy with a mild smokey wok hei, but the magic is in the scallop sauce, savoury and intense.

They have three types of wontons and we ordered two, skipping the chilli fried wonton (6pc, $8). The boiled wonton (6 pcs, $10, pictured above) shared the similar magical scallop sauce with kailan, but while the two dishes have the same sauce, they taste differently; so it is quite safe to order both dishes without getting bored of the same flavours.

The kailan adds a dimension to the sauce, making the dish more balanced and very slightly pungent, whereas for the boiled wonton, the sauce is thick and gooey and unadulteratedly salty.

There are four meats to choose from but the waitress recommended char siu ($10) as their signature. It’s nice. It isn’t super tender; it still has a bite which I prefer. And the sauce isn’t too sweet.

The food is good and we like it very much but one thing that bothers us is that the meal has too much sodium; most dishes walk the line between salty and overly salty but luckily, they don’t cross the threshold. Still, because we have eaten many dishes with much salt, our tongues tingle and there is a throbbing at the roof of my mouth. This is a pretty smart strategy to get people to drink beer because salt goes well with beer. And Mr Fitness did order a half pint that day. (I’m on medication, cannot drink alcohol.)

The secret of why their food is so delicious lies in their sauces, and then everything else seems to fall into place. We paid $54 for two persons and think this is a fantastic place we would return soon.