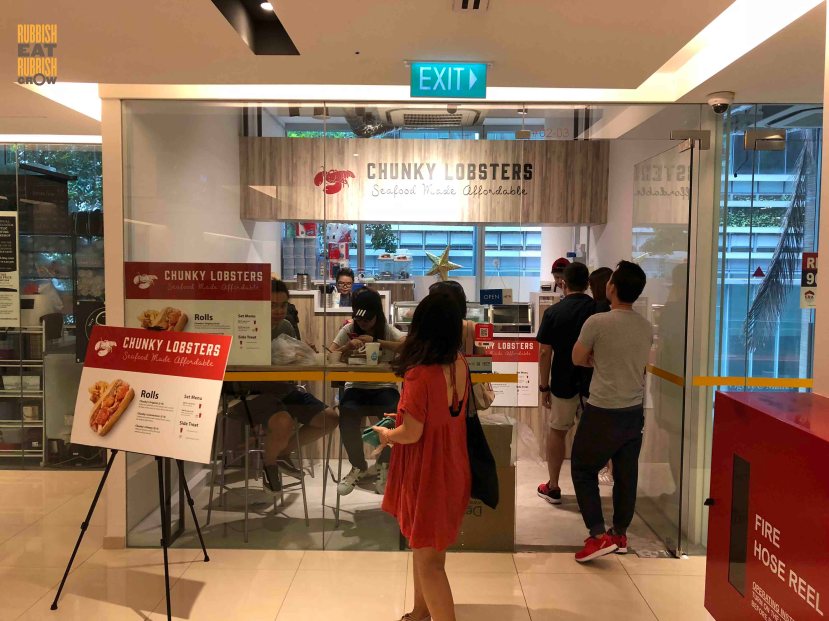 I thought the lobster roll craze in Singapore is over since 2014, but here we go again. Chunky Lobsters at Oxley Tower is a takeaway shop that sells lobster rolls at $16. That is incredibly cheap. When I wrote my lobster roll recipe in 2014, I managed to keep it at about $13. So $16 is a phenomenal price.

The two owners of Chunky Lobsters—one of them is a trained chef–unabashedly admitted that they were inspired by Luke’s Lobster, which is extremely popular with Singaporeans, although I dunno why because Luke’s rolls are just so-so.

Here, at Chunky Lobster, they use 85g to 90g of Canadian lobsters, instead of Maine ones which Luke’s Lobsters and most Singapore restaurants use. The owners reasoned that Canadian water is colder, allowing for the lobster to be firmer than Maine’s.

There are only three options of rolls, all priced at $16 and come with crisps:
1. Original
2. Chunky’s Connecticut (butter)
3. Chunky’s Cheezy (mozzarella, cheddar, parmesan, and cheddar)

When we were there about noon–they open at 11 a.m.–the cheese lobster roll was already sold out and we got an original and the butter.

Traditionally, the roll itself is slathered with butter on all sides and then pan-fried, so it is very rich and delicious. But here, they make the roll a lot lighter and less greasy. It’s good for people who are conscious about their health, but it also reduces the shiokness and robustness of a traditional roll.

Between the two rolls we got, original and butter, the original is better: the lobster is coated with a lemon butter sauce, mayo, and herbs (mostly oregano, I think). The mayo is just a very, very light touch, almost non-existent, but the lightness accentuates the sweetness of the lobster. The flavours are good. The lobster has a nice, firm bite. For $16, this is excellent.

The butter roll is okay, but not as good. The buttered lobster chunks sit on top of a line of mayo.

While the rolls are good, the sides aren’t. The chips are pathetically few. The lobster bisque is starchy and not sweet; its texture is like goo or what I imagine the slimy protoplasm ghosts leave behind in Ghostbusters. A traditional lemonade is supposed to be face-scrunching sour, but this one is watery and not a bit sour. But then again, with an additional $3.90 for the sides, really we shouldn’t complain.

We still felt hungry after eating the rolls (after this snack, we ate Yakun). It would be great if they could sell chunky fries/wedges to go with the rolls; the crisps are really too little. If they don’t, I think it’s better to buy two rolls than to buy a roll with a set. We paid $19.90 each. Go early, they sell out quickly, and the queue is long.