What truly unites Singaporeans is our common love for local dishes. It is a love so deep that we protect the dignity of our local food with lionhearted ferocity and unbridled pride. You may recall a recent nationwide umbrage over ‘Hainanese chicken rice’ incited by a UK celebrity chef or a certain popular digital media company who came up with an American version of it. Unsurprisingly, we had our doubts when we first heard that a popular Thai-style chicken rice brand is setting up a restaurant in Singapore. What is this ‘Pratunam Chicken Rice’? Is it even legit?

For those who have not tried it in Bangkok, Michelin Bib Gourmand awardee Go-Ang Pratunam Chicken Rice is indeed Hainanese chicken rice. Many of our local foods share the same heritage with our neighbouring countries and it just so happened that our forefathers were immigrants who chose to set foot on different paths. Third-generation owner, Ekkaphon Puekpaiboon aka “Gear” shared that his Hainanese grandfather migrated to Bangkok over 50 years ago. His grandfather cooked a variety of Chinese food to sell but eventually, he decided to focus on fine-tuning his Hainanese chicken rice to capture the hearts of his customers. The food business was handed over to his capable father, Sombat Puekpaiboon and in turn, Gear is now working together with his father to expand their chicken rice empire in Singapore. He is aware that Singapore has her own version of Hainanese chicken rice, a popular one at that, but he wants to share his family’s version of it with Singaporeans.

The poached chicken is sufficiently tender and succulent. Some people prefer roast chicken rice to Hainanese chicken rice because they do not like the gelatinous quality of white chicken skin. However, their chicken skin is thin with just a slight layer of chicken fat. I love it for the soft texture that encapsulates the natural flavours of the chicken. Their rice is significantly less oily than most of the local chicken rice that I’d eaten in Singapore. Fortunately, that does not rob the savoury of dish. I like that the rice is not overly salty as I have to eat it with other strong-flavoured dishes from the menu. 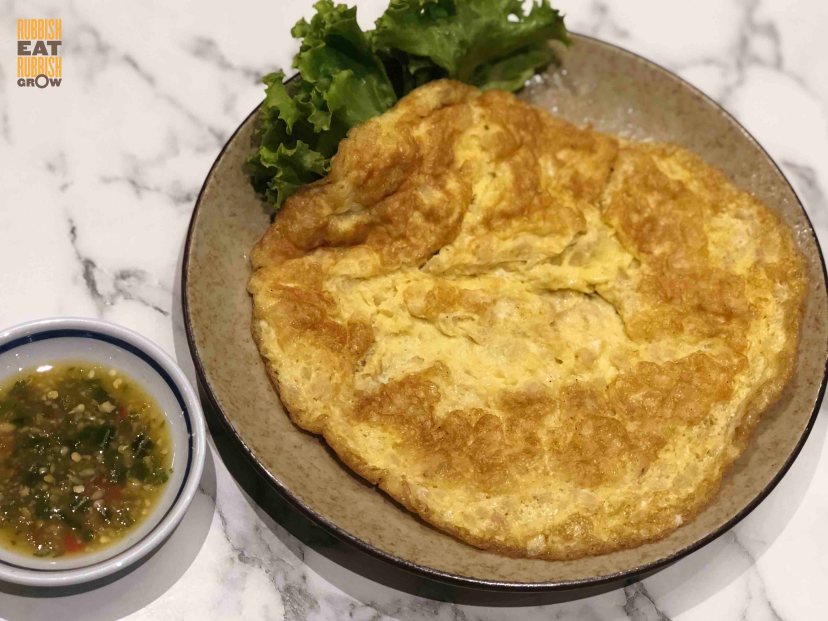 The biggest visible difference between Go-Ang’s chicken rice and Singaporean version of Hainanese chicken rice is the chilli dip. Instead of the familiar blend of orange chilli sauce and ginger sauce, theirs is a mixture of dark soya sauce, fermented soy bean, vinegar, cut ginger and green chillies, and possibly other secret ingredients to create that spicy and piquant condiment to complement the chicken rice. Some diners pour it liberally over their entire plates. The clear chicken broth is amply flavoured with chicken stock but there is nothing to shout about. Not exceptional, not bad, not a bad broth to rinse your palate.

You can also order a side of Gizzard and/or Liver ($2.50 per portion) to go with your chicken rice. 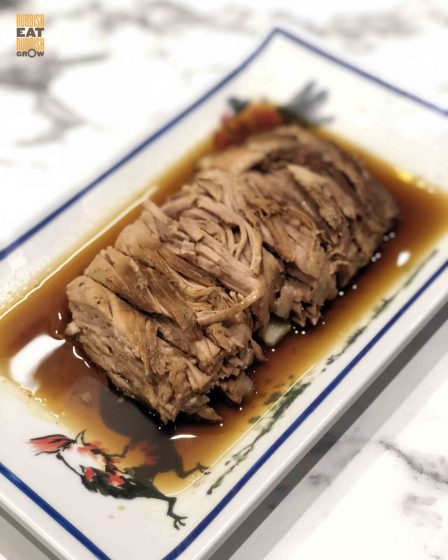 Apart from chicken rice, the restaurant serves other Chinese dishes such as Signature Braised Pork (Small, $8; Medium, $12), Chai Poh Omelette ($6.50), Stir Fried Sliced Tofu with Dark Soya Sauce ($8), and Double Boiled Bitter Melon & Pork Rib Soup ($6.50). The braised pork has layers of both fats and lean meat and the dish is well-spiced to reduce gaminess. Meat is soft and tender. As for the omelette, they can afford to add more chai poh (preserved radish) because I thought it is another regular decent omelette. I can hardly taste the radish. The stir-fried slice tofu with dark sauce is homely and comforting. I enjoy eating it with the chicken rice because of the dark soya sauce. As for the bitter melon and pork rib soup, the bitterness is quite overpowering. I can hardly taste the sweetness of the pork ribs in the soup.

The injection of Thai-Chinese fusion appears in dishes like Stir Fried Basil Chicken with Kai Lan ($8) and Steamed Sea Bass with Chilli, Lime & Garlic ($28). The stir-fried basil chicken with kai lan (Chinese broccoli) is average. If you like basil and kai lan, it is a good combination. Between these two dishes, I am more impressed with the latter. With copious amount of chillies, garlic, lemongrass and lime, the sea bass is nestled on a hot metal plate that is in a shape of a fish. The Thai know exactly how to tantalise taste buds. The sea bass meat is firm and fresh. The essence of the fish is continuously simmered with the garnishes to produce an ultimate umami flavour. It is altogether sweet, zesty and spicy at the same time. Such complexities are welcomed.

For desserts, we tried Red Ruby & Coconut Ice Cream ($5) and Steamed Tapioca with Coconut Cream ($4.50). The coconut ice cream is served rock hard. I guess that it was pre-scooped and stored in the freezer. It takes quite a while for it to soften before I can even take the first bite. The coconut flavour does not taste natural. I have eaten nicer coconut ice cream in Singapore, not to mention Bangkok. Thankfully, the red ruby is soft, slightly crunchy and sweet. Coated with coconut cream, the steamed tapioca is warm and starchy, pleasant to taste. 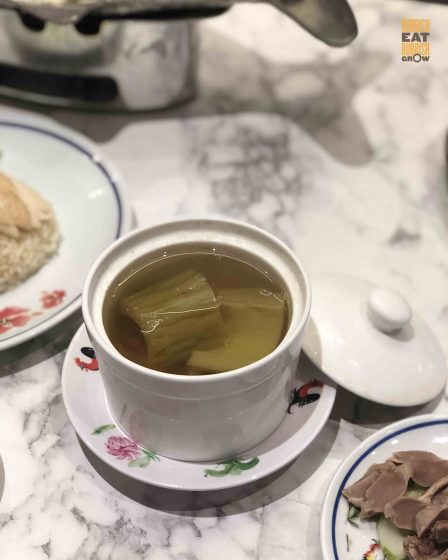 If you have a sweet tooth, you may like Thai Chendol ($5) or Thai Iced Milk Tea ($3). Thai Chendol is similar to our usual chendol but with red ruby. That is quite a straightforward improvisation. 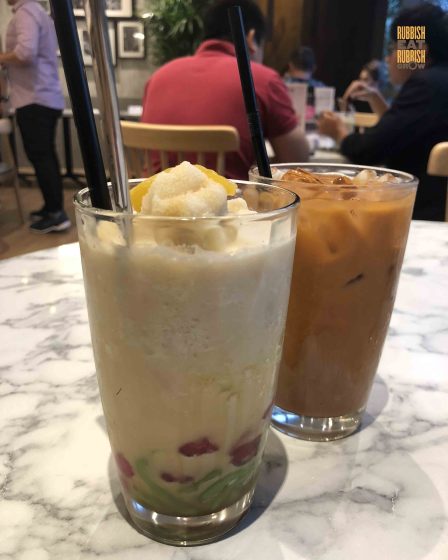 In conclusion, Go-Ang Pratunam Chicken Rice serves up good chicken rice. It provides an alternative to irrational chicken rice cravings many Singaporeans have frequently. Albeit less oily, the lack of grease does not compromise too much on the overall taste. Given that it is an eatery in a shopping mall, their price range is affordable, comparable to a coffeeshop’s cze char stall. Let’s hope that the quality control from the founder family perseveres.