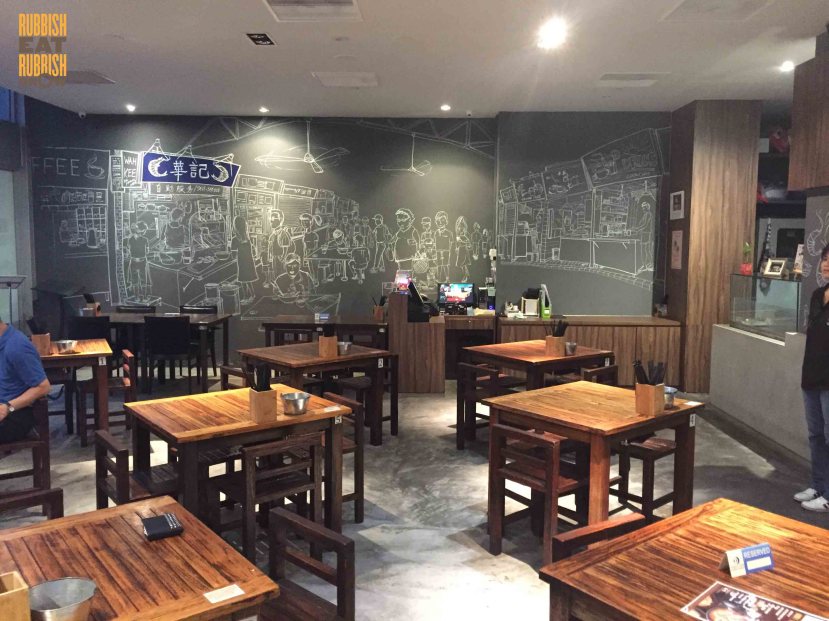 We were invited for a tasting at Wah Kee at Esplanade but we rejected it to write a fair and honest review. Wah Kee started as a hawker stall 67 years ago in 1951 and is a favourite of Hong Kong actor Chow Yun-fatt according to their press release. This is their first restaurant. Also on their press release, it states that “The prices of the prawn noodles will remain affordable, going at just S$6 per bowl — just a S$1 increase from the Pek Kio stall’s.”

Their prawn broth takes hours to prepare and uses only seafood, no pork. As a result, their broth is a bright orange and is lighter than other prawn soups. You may request for refills for free. The mee kia noodles are handmade. Here, on their menu, they also included steamboat, which is smart because they use the same broth. It’s an additional option to customers but they don’t need to incur more cost or do more work.

We ordered the big prawn noodles ($20 or $30) and the lobster ($15). The lobster gives good value but it doesn’t come with noodles so we had to add a bowl of noodles ($3). That’s pretty expensive for a bowl of plain noodles without many ingredients.

Although the big prawn and lobster use the same base, the lobster interacts with the broth and makes it much sweeter; it gives a boost of umami to the already-very-delicious soup. Besides the big prawn ($20), although firm and succulent, has only 3 pieces, so the lobster is priced better too.

The mee kia has a nice bite that isn’t soggy and is topped with lard and fried shallots. They also make their chilli in-house daily. It can be quite spicy, but it goes very well in the mee kia.

To pretend to be healthy, we had the kailan ($8) which is oily without much flavour.

They are also known for their wu xiang ($8 or $12) and we had the small platter. It consists of seaweed chicken, deep-fried tofu, fishball, one fried wanton, ngoh hiang, and the prawn fritter. This is bad. It’s greasy, over-fried, and done without any heart of effort. They should have put them in a small plate; in this plate, the ingredients look sparse and unappetising.

Some training is necessary for the servers because when we asked a few simple questions like “what’s the difference between this dish and that?”, they were not capable to reply. Including two drinks, we paid $74 for two persons. It is really expensive for hawker food. We will probably not return for dinner, but they have set lunch promotion which gives better value. And we may go for lunch, given that the place is comfortable and there wasn’t much of a crowd when we were there.