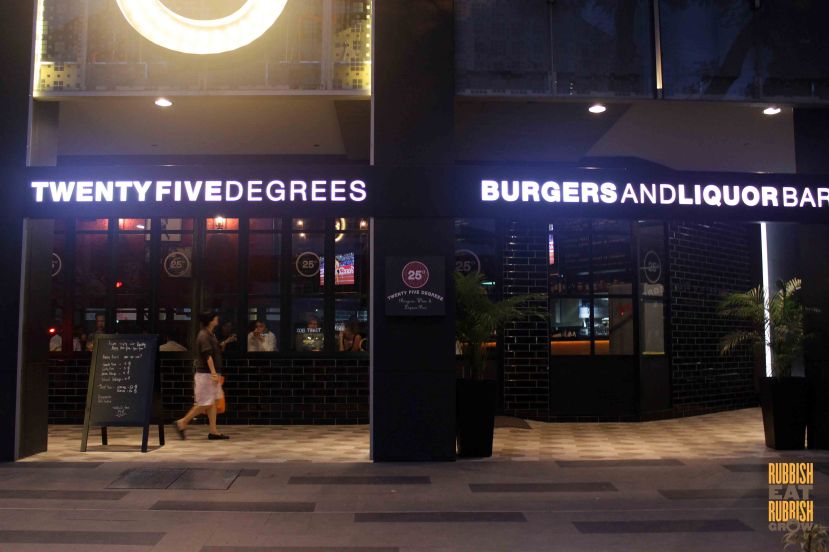 Chiobu, whose ambition is to be a tabloid reporter and follows celebrities on instagram, said, “25 Degrees? Never heard of it. Celebrities eat at In N Out, Five Guys and Shake Shack. Who are the celebrities who ate at 25 Degrees?”

“I don’t know. I googled and nothing turned up. But the press release said it, so it must be true.” But who cares about celebrities anyway? All we care about is the food. As Mindy Kaling imparts her wisdom, “Taste is the most important aspect to any food.” Profound, man.

And guess what? 25 Degrees is officially our favorite burger joint in Singapore.

The gourmet burger joint is started by Tim and Liza Goodell at the Hollywood Roosevelt Hotel in L.A. (Serious Eats wrote a favorable review of the original restaurant.)  The Asian outlets (Bangkok and Singapore) are helmed by executive chef Sylvain Royer who also runs Ginett, the restaurant-bar next door. But Chef Sam Chan, who just returned from working in Shanghai, runs the day-to-day operations.

Everything is made in-house. By everything, I mean patties, brioche buns, and the 14 sauces for the burgers. All patties come in 200g, a generous serving. 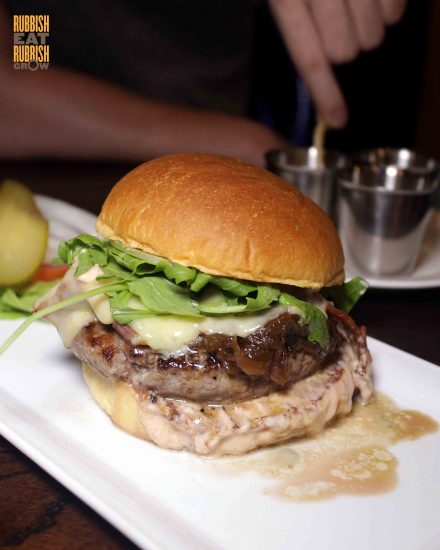 If you come during lunch, the very worth-it and affordable $18 set lunch gives a choice of burger, fries, and a drink (including beer!).

The No. 1 is indeed the number one burger in Singapore. What makes the burger a revelation is how the ingredients come together:

-the succulent, pinkish beef patty, made from grass-fed Australian striploin and chuck eye, a good mixture of fat and meat;

-the fluffy, sweet brioche bun absorbs the juices and thousand island, and remains firm, as a good bun should be;

-bacon adds umami and saltiness to the mix;

-a creamy thousand island that holds the burger together without intruding on any flavors of the ingredients;

-a mix of two cheeses, crescenza a cheese with high moisture, which means it melts well, and gorgonzola prelibato a young blue cheese aged 8-12 weeks, giving an underlying soft pungency without being forceful.

As you can see, the bun has a wide range of flavor palette (sweet, salty, pungent, umami, bitter) and a wide range of textures (fluffy, crunchy, molten, juicy, firm). That’s why this burger is such a turn on. Excuse me while I get a hotel room with No. 1.

Mr Fitness, who couldn’t appreciate blue cheese, prefers the interesting No. 4 which has a patty made from fresh, not frozen, yellowfin tuna. Although it’s a simple burger–butter lettuce, crispy fried onions, spicy aioli–and lacks the depth and complexity of No. 1,  the integrity of the fish comes through; even before Chef Chan told us that they use fresh tuna, we could already taste the distinct “fish-ness” of it. 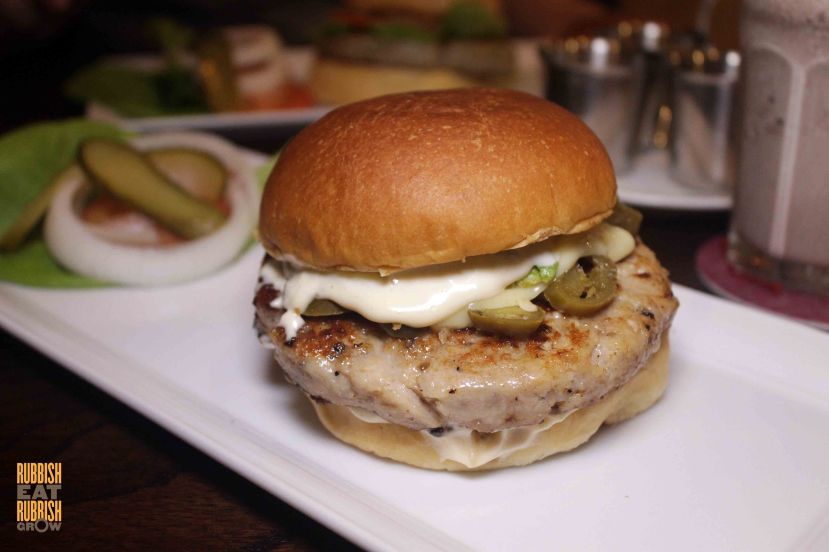 Variety is the spice of life–we switched the beef patty for a turkey patty for our third burger–but unfortunately, there is too much spice in our No. 3; to be specific, it was way way way too peppery that it created a burning purgatory in our mouths.

This comes as a disappointment partly because the first two burgers are awesome, and partly because No. 3 reads so well on paper. It has Tex-Mex flavors–I love Mexican food–with jalapenos and chipotle and mezzo secco cheese (from the Monterey Jack family).

As a side, the truffle fries ($6) are excellent. It isn’t doused in much truffle oil, so the truffle aroma isn’t strong. But the shoestring fries are thinner than elsewhere, making them crispier and more addictive. We couldn’t stop popping them into our mouths even as our stomachs were groaning under the weight of the burgers. 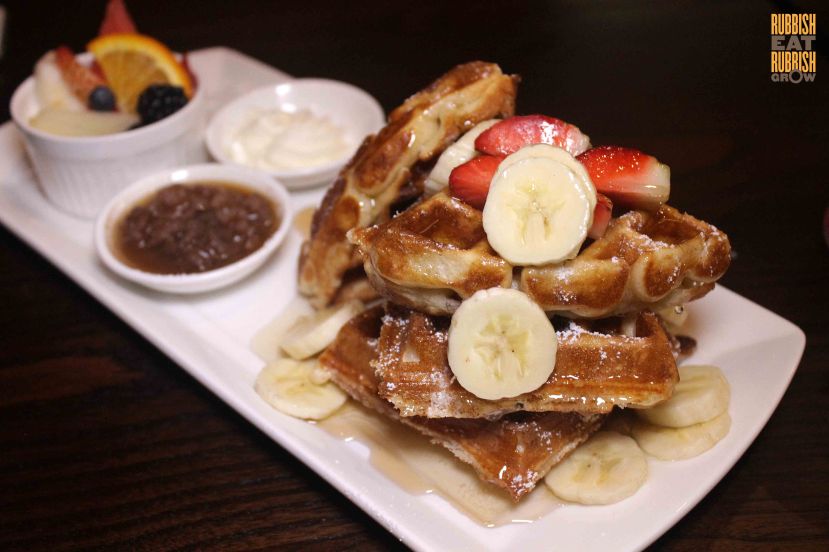 What to avoid: the sweet things. Don’t waste your calories on the waffles ($13) and milkshake ($10). The waffles are terrible. The taste of the waffles is flat but the syrup can cause diabetes. The milkshake has ice shavings, more like a smoothie than a milkshake. (They also serve smoothies $8 here, so maybe someone in the kitchen mixed up the recipe.) 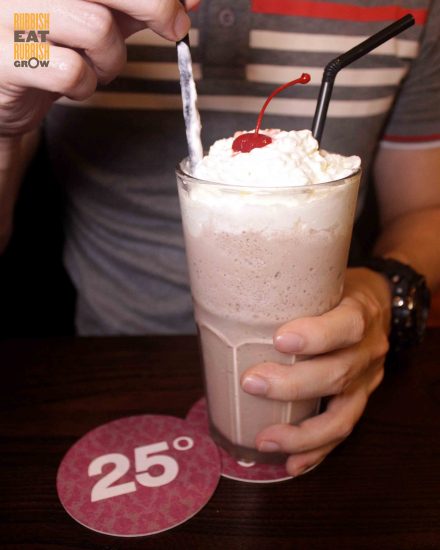 How good are the burgers? When Mr Fitness and I met the next day, we reminisced and sighed over them like they were sometime lovers; we are compelled to return soon. The pricing is reasonable (at two-third the price of other gourmet burger joints); the serving is generous; and the burgers are game-changing. I’m in love with 25°. The stalkerish kind of love.