Kimme, Amoy Street: Modern Korean Restaurant May Be the Restaurant of the Year (Again)

Kimme Restaurant at Amoy Street serves modern Korean cuisine using Western culinary techniques. It is opened by Chef Sun Kim of one Michelin-starred Meta Restaurant and the kitchen is helmed by Head Chef Louis Han, who worked with Chef Sun for the last two years. Funny story: we named Meta the second best restaurant in 2016 and half a year later, the Michelin Guide gave it a star. (I’m not saying I am a Michelin inspector but…)

While the food at Kimme is excellent and is the best we have eaten this year, I don’t think it will receive a star for various reasons I’ll give later on. 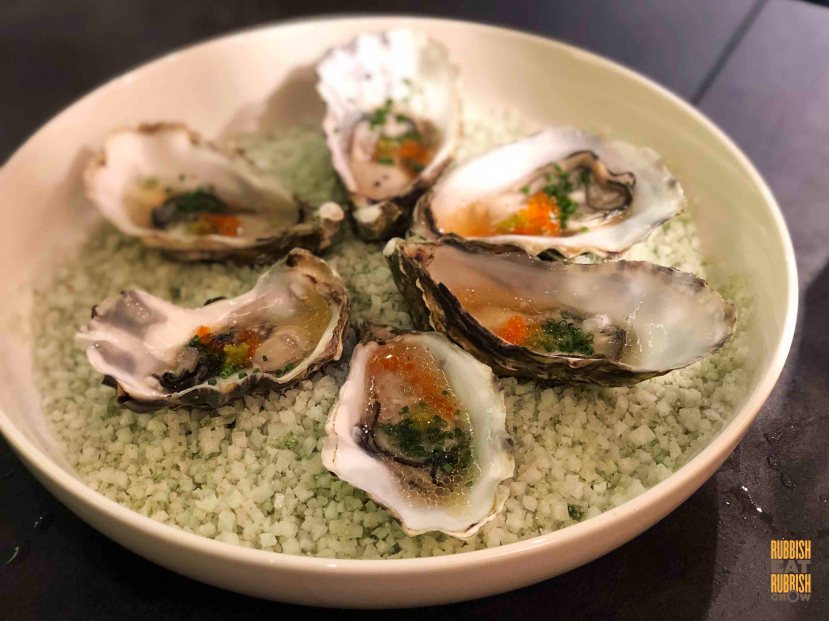 The Irish oysters ($26 half a dozen) are rather malnourished and skinny, and while the seasoning of lemon ginger (with something spicy like gochujang?) is nice, it may overpower the taste of the oysters.

I was at first reluctant to order the kampachi sashimi ($26) because the menu doesn’t sound promising; it merely states “KAMPACHI SASHIMI · GINGER · GOCHUJANG.” But it is explosive and super delicious. The rolled-up sashimi sits in a traffic light of gochujang and chive oil. Yuzu kosho (which Kimme uses in many dishes) is sprinkled on it. There is also pomelo somewhere. It’s complex and lovely and umami. MUST ORDER.

Another MUST ORDER small plate, Argentina king prawn ($30), is topped with their homemade XO sauce, spring onion, Jersualem artichoke, and mussels. They are surrounded by a whorl of squid ink. This doesn’t taste at all like your cze char; it is dynamite. Orgasmic. The type of food that makes you close your eyes and go Mmmmmm.

What I love about the small plates—they are complex and layered with many ingredients but still super delicious and not complicated–cannot be translated to the large plates. In fact, I think Kimme should steer clear of any traditional Korean dishes. For example, the bossam ($35) is a traditional boiled pork dish wrapped around kimchi. But I had eaten an amazing version at Gae Hwa Oak 개화옥 before, so while Kimme’s rendition is good–tender, not gamy and all that–it pales in comparison with the best.

Kimme should stick to what they do best (creative fusion dishes) like this French quail ($32), which is marinated really well and has a lovely, potent savouriness. In fact, I think this might be the best quail I have ever eaten. And it’s paired very smartly with celeriac mash and watercress salad topped with a spicy (gochujang?) sauce. Don’t think I’ve seen quail paired this way before and it is fantastic with all the different flavours and textures interacting with one another.

While the food is excellent here, there is some room for improvement in two areas:

1. Decor: When you enter the first floor of the shophouse, it is magnificent. Yellow dim lights, open kitchen, a huge gorgeous marble table with a wall shaped like a hull. But we sat on the second floor (see the first photo of this post) where it is really quite badly decorated as if all the money has been poured into the first floor, leaving little budget for the second. Given that this isn’t a cheap restaurant, the furniture sure looks pretty cheap.

2. Service: The lady (receptionist? manager?) is superb. She bantered with us, told us about her trip in London, recommended good desserts. We adore her and want to adopt her as our god-daughter. But the two male waiters require some training. One of them even asked me on several occasions to pass him my cutlery or my glass; this should never happen in a good restaurant. Sometimes, they forgot to fill our wine glasses and we had to ask (they kept the wine bottle behind the bar). And they didn’t even introduce the dishes until I asked for the ingredients in the dish. He then started to introduce the dishes for 2 or 3 times, and then completely forgot to introduce again.

The food is really spectacular but it is marred by poor service and ugly setting. Including a bottle of white wine ($100), we paid $350 for three persons.

You may be interested in…
–Blackwattle, Amoy Street: Outstanding Australian Cuisine by Chef from Automata in Sydney
–Birds of a Feather, Amoy St: Modern Sichuan Food in Paradise
–Employees Only, Amoy Street: 7th Best Bar in the World, Speakeasy With Decent Food
–Nouri, Amoy Street: “My Favorite Dish Is the Bread.” Yikes.