Saveur’s latest brainchild, FrapasBar is now opened at The Cathay and Century Square. You may be familiar with the outlet at The Cathay as it was formerly Concetto, Saveur’s foray into Italian food. No brainer on the new name though, “Frapas” is made up of “French” and “Tapas”. Tapas is of course, indigenously Spanish. We are interested to find out how the restaurant strides across the Pyrenees to bring these two cuisines together.

Crabmeat Croquette ($9) is lightly battered and deep fried. There is no specially made dip. I assume it is unnecessary as the filling is already a mix of real crabmeat with fennel, red chilli, mayonnaise and coconut. I came to realise that a wedge of lemon is all I need in a tapas restaurant. These croquettes make a good snack but otherwise, unexceptional.

Grilled Broccolini ($9) is drizzled with sesame sauce. The stalks are not overcooked and still have a nice crunch. Broccolini is less chunky than broccoli, thus making it a more suitable vegetable for grilling. I feel that the dish does not need sesame sauce. A little salt would have sufficed.

Oysters lovers, these freshly shucked oysters are going for $2 apiece. It is a pretty neat deal in this part of town. Best eaten with a glass of white wine. 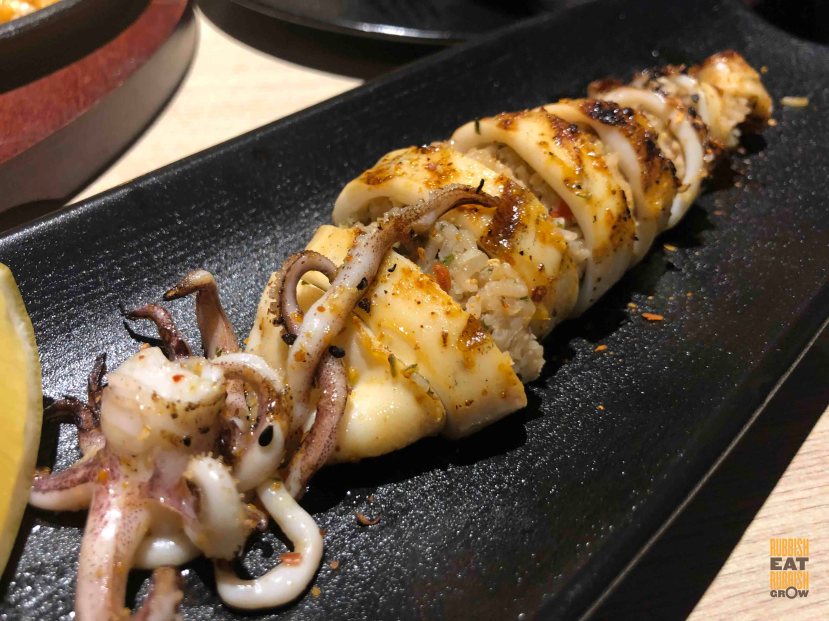 Stuffed Squid ($18) is packed with flavourful French onion rice and then grilled to perfection. The tangy rice absorbs the seafood sweetness of the squid and it is altogether pleasing and delicious to taste. 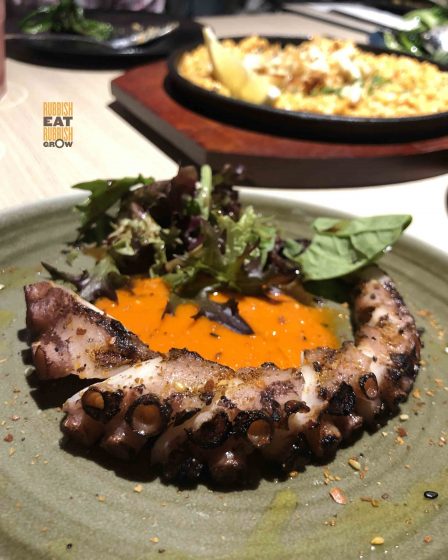 Fun fact: We know that octopuses have eight limbs. Scientists who had been observing them for years concluded that six of the limbs are arms, two are legs. In FrapasBar, they offer Octopus Leg ($15) on the menu. I am not sure why they disregard arms but maybe legs taste better. The char-grilled octopus leg is served with a piquant pimento sauce for extra zest.

I was taken aback by the very first bite of the Meatballs ($9). The minced beef is marinated with too much pepper. I would not have known what meat it was if not for the menu description. The meatball does not taste so bad when it is eaten with the tomato sauce, however, that itself is not a redeeming quality.

A Beef Bourguignon ($14) is done right when every bite is tender, from the carrots to the beef. Apart from the usual red wine, the chefs add Valrhona chocolate to create a more velvety and richer stew. Very tasty and addictive, it is a mood booster. You have to order it if you like beef.

One of the chefs’ daughter sparks the idea of using otah (grilled fish cake) as a sauce base for a risotto. Giving credit where credit is due, this risotto is named after the little girl. Sophia’s Risotto ($22) is a nod to local taste buds in the entire menu. With generous toppings of grilled crabmeat and chives, the creamy otah risotto is savoury and not too spicy. Portion is huge. You may want to share it with at least three other people.

The taste of earl grey is quite distinctive in the Earl Grey Crème Brûlée ($8). The white specks you see on the caramelised coating is sea salt. They are used to counterbalance the sweetness of the crème brûlée. The Chocolate Moist Fudge ($9) is not simply made up of chocolate but is infused with rose syrup. The cocoa crumbles taste like ‘milo-horlicks’ crisps. The sea salt sprinkles and rose syrup infusion are light touches from the chefs to make the desserts less cloying.

It is great that the restaurant is converted into a bar with extended business hours. Late-night movie goers now have a place to hang if they want a nightcap or something to eat. The food is generally good and suitable for sharing.

You may be interested in…
–Merci Marcel, Club Street: The Same Same But Different Second Outlet of the Casual, Simple French Bistro Dining
–Summer Hill, Sunset Way: Rustic French Bistro by Former Chefs of Cocotte and Bird Bird
–Merci Marcel, Tiong Bahru: Who is Marcel and Why Should We Thank Him?
–Venue by Sebastian, Downtown Gallery: After a Hiatus of 3 Years, Former Ember Chef Re-Emerges