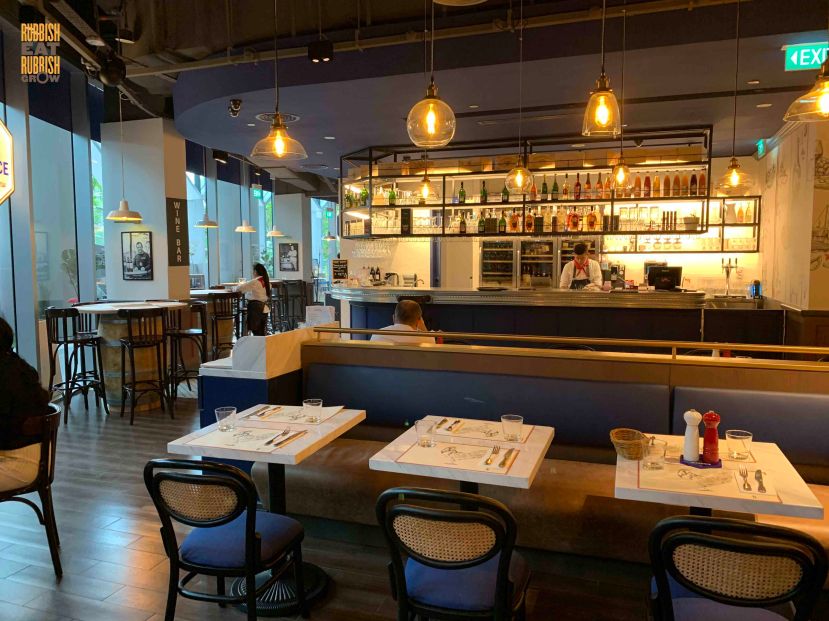 We rejected the media invitation to So France at Duo Galleria when they just opened, opting to pay for our own food and visit it anonymously to give an accurate and honest review.

So France consists of a dining area and a small epicerie (supermarket) which stocks 500 products imported from France, ranging from expensive ingredients like foie gras and caviar to jams and condiments.

For the dine-in experience, So France is run by Executive Chef Felicien Cueff with 35 years of experiences which include two- and three-Michelin-starred restaurants. He is assisted by chef Frédéric Coiffé. The signatures include duck confit ($26), garlic butter escargots (6pc, $20), and Bordeaux-style rib-eye steak ($34). Take advantage of 2- or 3-course lunch ($27++ / $32++); it gives excellent value.

For appetiser, the pork pâté is much better and cheaper than the one we had two weeks ago at Gaston. It is nicely fat with a nice bite. Just slightly gamy so that it has the flavour of pork, but not revoltingly so. The not-too-vinegary cornichon pickle and the sweet, almost earthy black cherry jam cut across the savouriness of the pate–a stellar combination.

For mains, both the sirloin steak and boeuf bourguignon are equally outstanding. This steak is none of that sous-vide crap; it is done traditionally, simply and excellently roasted. We ordered it to be medium-rare and it came perfect. It has a great bite and the beef is full of flavour. The great sauce–beef jus?–is glazed on the steak, bolstering its “beefy” taste. The steak comes with a ramekin of ratatouille and skin-on fries, which deserve a mention. I suspect they fry the fries twice because the middle has turned nicely mushy and sweet, contrasting the skin which remains crispy for some time. 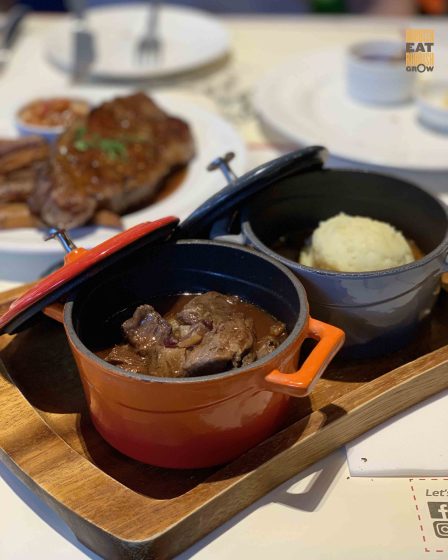 A perfect meal from the start to end with apple crumble. Different from apple crumble elsewhere, here they add salt, which is both surprising and delicious. The salt has played off the tanginess of the granny smith apples really well. And to tie the salt and acidity together is the super aromatic sweetness from their house-brand vanilla ice cream.

One area that can be improved is their service. They don’t take initiative and have little knowledge about the food when I quizzed them. There weren’t many people when we were there but they were still inattentive as if they were actively avoiding customers. Communication is not good too, often abrupt, almost brusque. Some training is required here.

But overall, the lunch deal is a steal, and the food is outstanding enough for us to risk a second time there. So France reminds us of Bistro du Vin. If you like Bistro du Vin and don’t want to pay an arm and a leg, So France offers a great alternative. We paid  $64 for two for lunch. Quite a good deal considering the portion size and the taste.