There are no famous chefs at Indigo Blue Kitchen at Shaw Centre, opened and operated by the Les Amis Group. The restaurant is a concept inspired by the childhood memories of the chairperson of the group, Desmond Lim, growing up in his Peranakan grandmother’s kitchen.

I wish I can be so petulant too and rich enough to just anyhow anyhow open a restaurant. I have lots of memories too.

To cut a long story short, the restaurant uses Lim’s family recipes, with his cousin Gloria Teo as consultant. 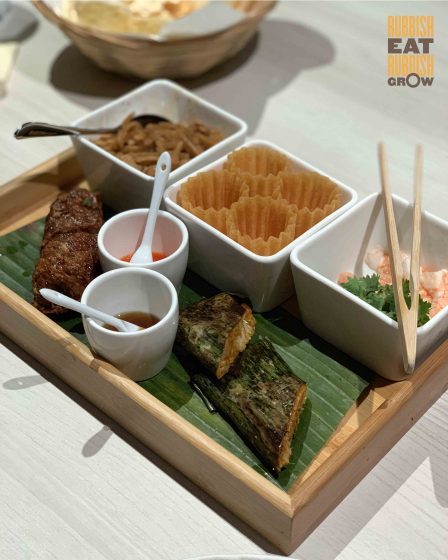 The signature of the restaurant is their nonya popiah (4 rolls, $32) but since there were only two of us and we wanted to sample more food, we got the platter for 2.

Everything on the plate is spectacular. The kueh pie tee is a little different from elsewhere: the shredded turnip, usually white, is dark here and I suspect they use soy sauce, making it taste like chap chye on its own. But together in the cup, with coriander and prawn (they give 2 prawns sliced into half, so it looks like 4), it tastes more savoury and interesting than the usual.

The otak-otak has a fantastic texture with chunks of fish (traditionally the fish is Spanish mackerel but I didn’t ask what fish they use here). Spices are interspersed between the chunks so that this otak has a layered spiciness.

The ngoh hiang is also excellent: extremely crispy skin and the pork they use is full of fats, and fats = umami. The tenderness of minced pork contrasts the crispy skin. 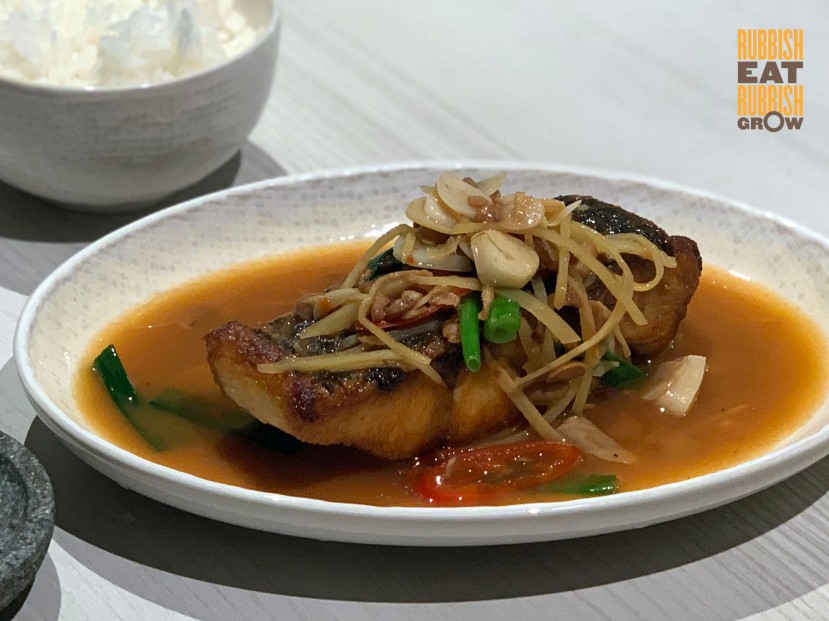 Perhaps it was a mistake, removing so much spice that the sauce just tasted sourish (tamarind?) although the fish was cooked admirably well. 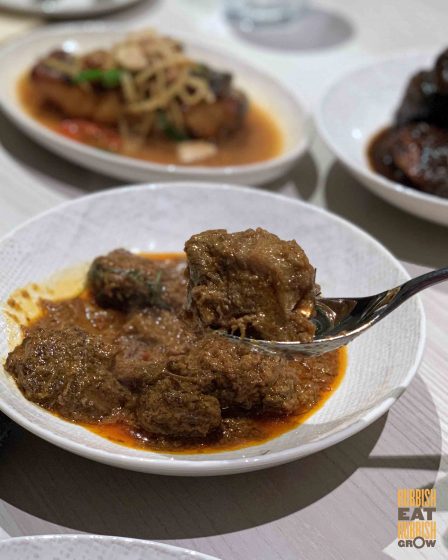 They use Australian beef brisket and shin for the beef rendang, and braise it until the meat is super tender. Although it is super tender, the spices are not concentrated enough.

The chicken buah keluak is nice, but nothing extraordinary.

We were too full and cancelled our order for dessert, their signature apom ($14).

On the whole, the starters are impressive, but when it comes to the mains, they are run-of-the-mill. Not terrible, but not fantastic; you won’t complain, but there isn’t much to compliment. I suppose if the restaurant holds the concept of a family meal, then it is suffice.

You may be interested in…
–Folklore, Beach Road: Eurasian-Peranakan Food that is Different from the Rest
–Whole Earth, Tanjong Pagar: VERY SMELLY, Expensive But Excellent Food at the Only Vegetarian Restaurant to Be Awarded by the Michelin Guide
–National Kitchen, National Gallery: Michelin Stars for Singapore’s National Treasure, Peranakan Chef Violet Oon?
–Indocafe The White House, Newton