Mian Yang noodles is named after the second largest prefecture in Sichuan. Legend has it that when 3rd-century warlord Liu Bei and his troops were served the noodles by a Mian Yang housewife, he exclaimed, “How lucky, this is a good day — I’ve tasted something delicious!”

Apocryphal story or not, what this means is the noodles have a history of more than 1700 years.

For months, the owners tasted noodles from 50 shops in Sichuan until they found one they liked. Then they took a year and many return visits to persuade the noodle stall to share the artisan noodle makers’ contact.

Mian Yang noodles is made from just two ingredients, rice flour and water. The rice flour is harvested from the artisan noodle makers’ own rice field in Mianyang and ground on-site. For water, they use mountain spring water. The dried noodles are shipped from Sichuan to Singapore once every three weeks.

They have several interesting appetisers such as braised eggplant ($4.50) and ox tongue ($6.50). For appetisers, we had the liang fen (cold bean jelly $3.50). This is weird for us. The liang fen tasted like a sweet, fragile jelly (more like dessert) but it’s topped with a savory sauce of a mixture of dou ban jiang (fermented bean paste) and dao kou jian (fried Sichuan peppers). We were confused if it’s an appetiser or a dessert. 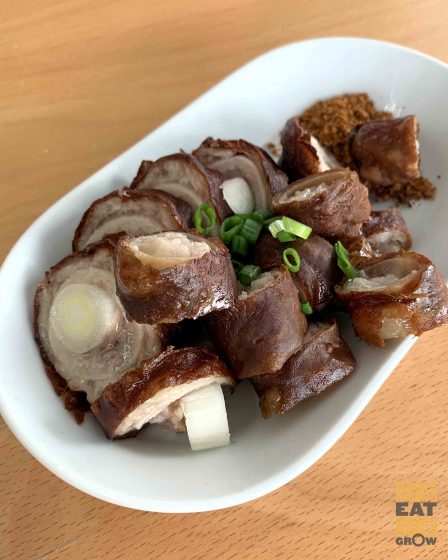 The other appetiser we ordered, fried crispy pig intestines ($5.50), is braised in a seasoning of star anise, cinnamon, nutmeg, Sichuan peppers and peppercorns for 4 hours. It is then stuffed with Japanese leeks and then deep fried. The combination of crispiness and soft fats is so pleasing. The slight gamey-ness dissipates when you dab it with the powder by the side.

For mains, there are a choice of two noodles, Mianyang rice noodles or wheat-based noodles. Don’t bother with the wheat noodles.

There are four varieties of soups: clear, red, mixed (a combo of clear and red broths), and Sichuan vine pepper.

There is also a dry-tossed option for the Home Specialty Mashed Pea noodles ($12.50) which sounds interesting but there was no stomach space to try.

We had the signature braised beef noodles in red mala broth. It consists of braised beef cheek in a pork broth of Sichuan peppers, pickled chillies and dried chillies.

The beef is too sparse and stingy. But the broth is great, so full of collagen but not oily. It’s also not overly spicy, so it’s easy to drink even for people with low spice tolerance like us.

The Mian Yang noodles are amazing, silky and taste like a cross between bee hoon and mee sua. We love it.

The king prawns with vine peppers ($15.50) comes in a unique broth made with chicken soup, Sichuan vine peppers and chilli padi. This is even spicier than the mala soup. If you have eaten Tan Yu’s peppercorn fish before, the broth tastes similar to it.

We didn’t have desserts but there is only one option, liang gao ($3.50), which is glutinous rice curd (more like jelly) served with black sugar syrup.

This noodle shop is very good. The Mian Yang noodles is delicious and definitely worth trying. The only issue is that the drinks are expensive, which is a smart move. Spicy food, so customers need drinks. We paid $44 for two persons.