Pizzeria Mozza, MBS: Sexual Harasser’s Restaurant Ought to be Shut Down. He Said to his Waitress, “It’s not fair I have this view all to myself when you bend over. For dessert, would you take off your blouse for the others?”

If I had known Pizzeria Mozza at Marina Bay Sands is opened by a sexual harasser, celebrity chef Mario Batali, I would have never gone there. But we went before the news broke. First, I want to talk about his food, his delicious food, and then I want to urge everyone NOT to go there.

On the day we were there, the restaurant was packed to the gunwales; if you don’t have a reservation, it is unlikely you will get a seat. Families seemed to be in the majority. Although it was busy, the servers were attentive and great.

The restaurant is decorated casually, lots of wood, but the passersby at the corridor could easily look in, something that I don’t like. I hate the idea of people seeing what I eat.

But the casual setting of the restaurant belies the high prices. The spinach salad ($19) consists of spinach, ricotta, lemon, pine nuts, pomegranate & anchovies. I mean, TWO anchovies. Can’t they spare more? Tastewise, however, it is crunchy and zesty, a good way to start the meal.

If you have a starter like we did, a pizza could be shared comfortably between two adult males; we were stuffed. The pizzas are priced from $20 to $38 with so many interesting choices. We were tempted by the Bianca with truffle cheese ($34), the mushroom Funghi pizza ($30), Napolitana ($27), and fresh goat cheese and leek ($30) but we eventually settled with the waiter’s recommendation, burrata and slow roasted tomato ($30) because I’m a huge fan of burrata. 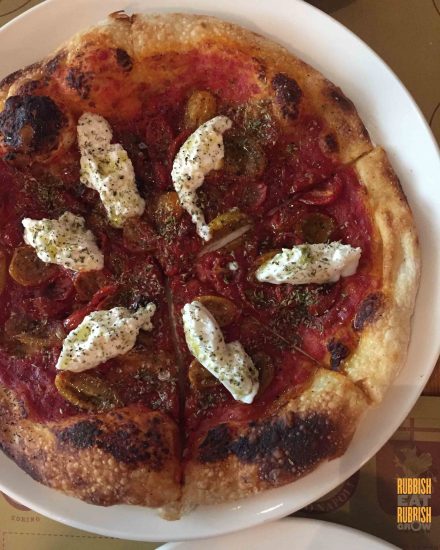 The burrata, made by Di Stefanos at California, is imported from L.A. It is fantastic, so milky, and its richness is undercut by the perfect tomatoes that fill the heart with lazy sunshine. The crust: Thick and fluffy and chewy and orgasmic. It’s a recipe from Nancy Silverton, part owner of the restaurant, who is famed for her artisanal sourdoughs. They ferment the wet dough, made from high-protein King Arther flour, with yeast from California. So good. Really fantastic pizza.

Now let me tell you why we should STOP patronising Pizzeria Mozza: Mario Batali is a sexual harasser. He admited it himself, “Although the identities of most of the individuals mentioned in these stories have not been revealed to me, much of the [sexual harassment] behavior described does, in fact, match up with ways I have acted.”

He grabbed his staff’s breasts. He blocked their way so that they had to straddle him to get across. We are not talking about a common pervert here; Celebrity Chef Batali has immense clout and could destroy these women’s careers. He has made the workplace unsafe and unprofessional for women.

Besides, it is not a singular case; he has done it over and over again such that other celebrity chefs who have not worked with him have heard the rumours. Batali co-owns restaurants in New York City, Las Vegas, Los Angeles, Boston, Singapore, Westport, Connecticut and New Haven, Connecticut. Imagine the number of women he has abused over the years in his myraid restaurants.

Some people, like Matt Damon, suggest that if a person is truly apologetic, we should give him the chance. Well, fuck you Matt Damon. How about I slap your mother and write a press release about how contrite I am? An apology is cheap. An apology is worthless when a human being has suffered so much. We are not only talking about the physical trauma HUMAN BEINGS undergo, they also suffer psychologically. They worry about their livelihoods and at the same time they endure the mental anguish and humiliation of their abuse.

Furthermore, if any powerful man is truly sorry, they should have come out and apologise BEFORE their cases are known. Maybe then it is nominally acceptable to see how this man behaves next. Words mean nothing; actions count for all.

But the thing is Batali isn’t even apologetic! Here’s his “apology”: 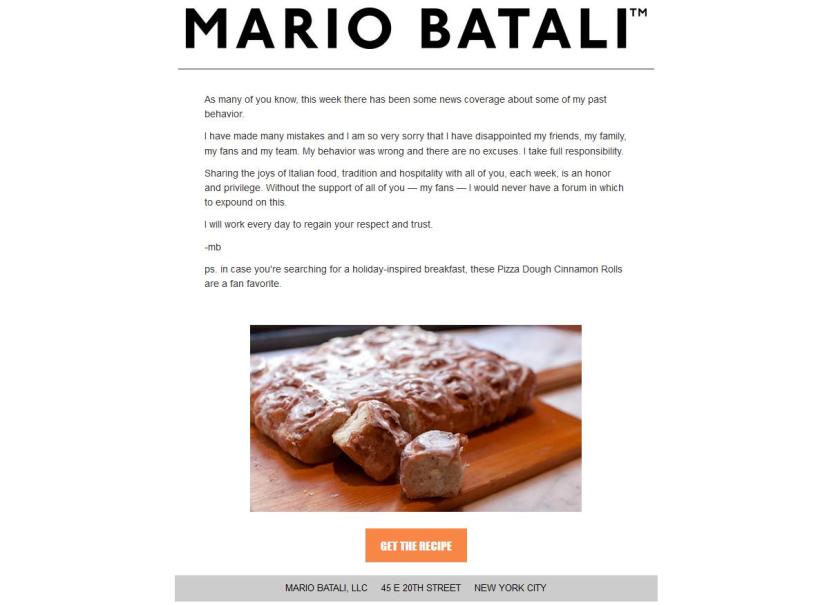 He ended his lame-ass apology with “ps. in case you’re searching for a holiday-inspired breakfast, these Pizza Dough Cinnamon Rolls are a fan favorite.” By connecting a recipe with his apology, he is trivialising and depreciating the pain he has put his victims through. To him, his victims don’t even deserve a post dedicated to them. Their agony is as insignificant as finding a recipe for cinnamon rolls.

Because of the allegations, Batali said, “I am going to step away from day-to-day operations of my businesses.” Peeps, read it carefully. He won’t be involved in the daily running of the business but he will still receive dividends, royalties, and whatnots. He will continue to earn your money as long as you patronise his restaurants, buy his cookbooks, watch his cooking shows. This scum who has no respect for the dignity of women, of mothers, daughters, lovers, and sisters.

And Marina Bay Sands is COMPLICIT in the denigration of women. The news of Batali’s abominable behaviour only broke about a week ago and MBS has already changed the website from “Pizzeria Mozza by Mario Batali” to “Pizzeria Mozza by Nancy Silverton.”

Instead of closing the restaurant permanently, MBS tries to cover up Batali’s involvement. Clearly, MBS knows what’s at stake here: trying to save a very popular restaurant so that it can continue to reap profits. And this money goes into Batali’s pockets too. For monetary gains, MBS decides to turn a blind eye on the degradation of women and continues to fund a sexual predator.

MBS, do the right thing. SHUT IT DOWN. No matter how delicious his pizzas are, we don’t want them. There are many brilliant chefs around, we won’t and don’t need to suffer the abasement of human dignity for that little bit of sparkle in our lives. With integrity, we can burn brightly on our own, we can dance on our own.

You should probably eat your pizzas elsewhere:
–Pizza Express, Scotts Square: Fantastic Feasts and Where to Find Them
–Ristorante Luka, Tanjong Pagar: Excellent Italian Food by Japanese Chef Takashi Okuno
–Pizza Fabbrica, Kampong Glam: One of the Best Restaurants This Year
–Alt Pizza, Suntec: One of the Best Pizzas in Singapore (Good Draught Craft Beers too!)