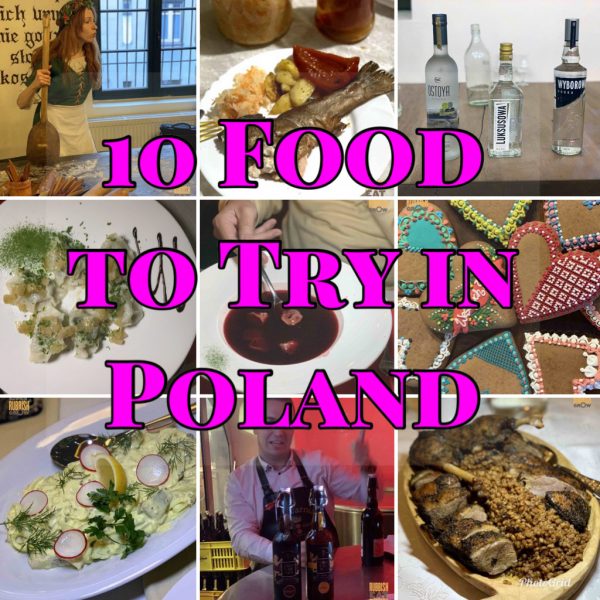 KOWR (National Support Centre for Agriculture), under the Polish Ministry of Agriculture and Rural Development, has invited a food expert to bring us all around Poland to eat their traditional specialities using fresh local produce. Many dishes on this list have been around of centuries.

What is characteristic of Polish food? From my experience, they like soups, the flavours are strong, and they like to add vinegar in many dishes. As a result, many dishes have a range of sweet-and-sourness.

We have eaten a great many dishes in Poland, but to make this list, I choose those memorable traditional ones that locals eat. First and foremost, I focus on taste and the freshness of the ingredients.

These are the 10 food you must try in Poland: 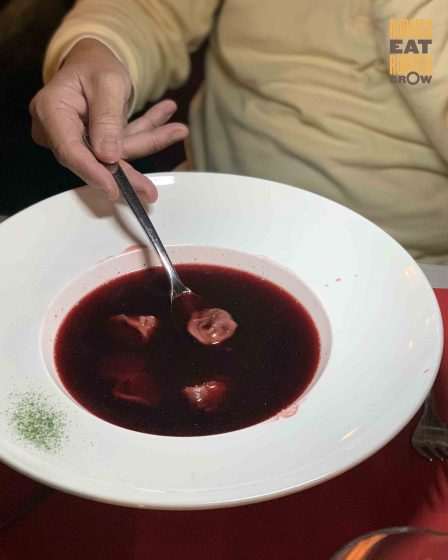 The reason why beetroot makes this list is because Polish eat it very, very often. It’s almost in every restaurant we went. Beetroot isn’t eaten on its own but it is usually eaten as a soup or a supplement to the main dish, replacing potatoes.

While beetroot is quite common in Asia, the Polish add condiments to mask the earthiness of the ingredient, making it palatable and easy. 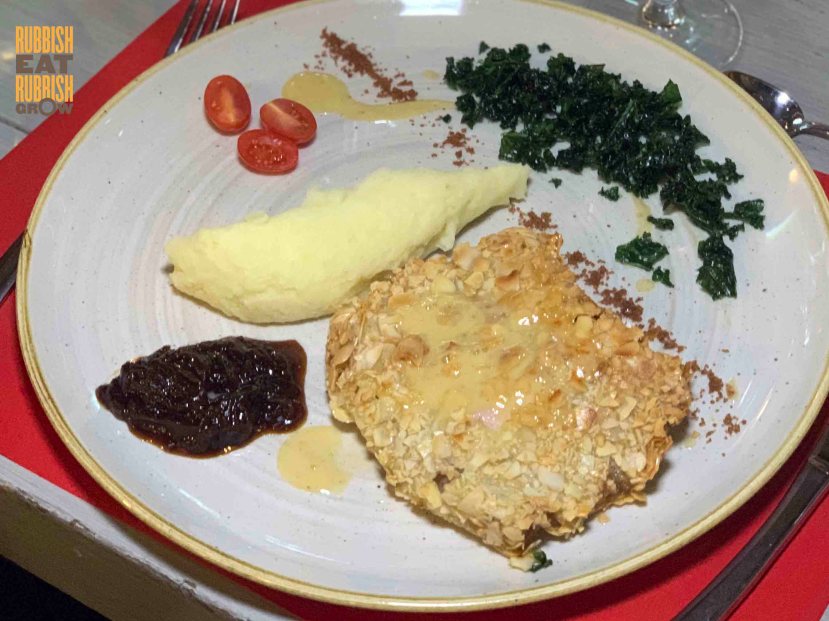 Usually they pan-fry carp. This is a fancier one: almond-crusted carp.

We don’t usually eat carp in Asia. In Poland, they eat carp around or on Christmas where they go meatless. (They don’t consider seafood as meat.) Since it’s a freshwater fish, it has a slightly muddy flavour and grainy texture. They usually pan-fried it. Although it probably isn’t the best tasting species of fish around, it is worth trying for the novelty. 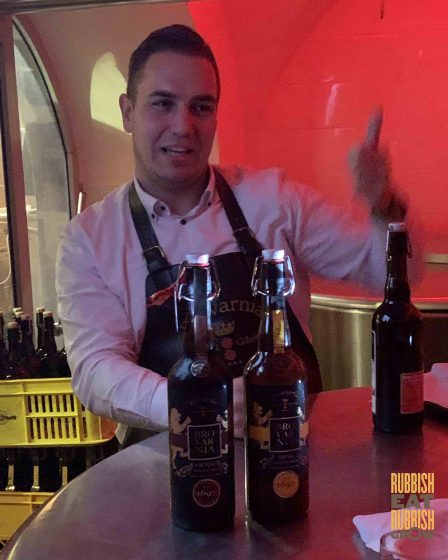 In the 16th century, Poles didn’t drink water because it was contaminated; they drank beer. Even children did. Beer was used as a medicine–so it really is angmoh liang teh.

In the past, beer was thick and sticky. The Poles took beer so seriously that the penalty for serving bad beer that wasn’t sticky was worse than the penalty for threatening people’s lives.

But these days, our beer is diluted with water, making it smooth.

We had craft beer tasting at Brovarnia Gdańsk (which is situated in a historical beer brewery building since 1690) where footballers Messi and Neymar had enjoyed their beers. The microbrewery has 3 types of beers at any moment (3 because of constraint of space) and must be drunk within 2 weeks of production.

The permanent lager on their menu goes great with everything; a second beer made from wheat is too fishy for me; and I like the festive gingerbread beer so much I bought 3 bottles back to Singapore for Christmas parties.

While you can get gingerbread everywhere in the world, it is rather big in Poland. You can find the flavours in a dessert or a beer. 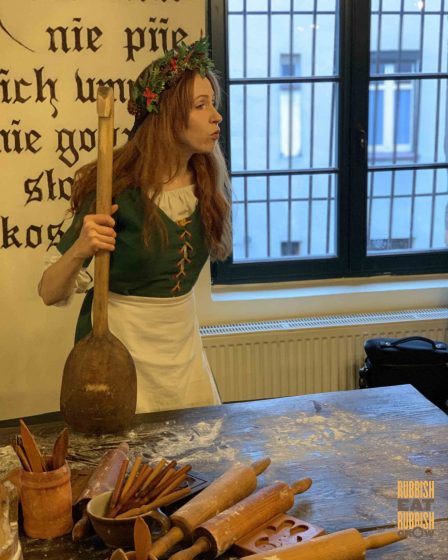 A medieval witch at the Gingerbread Museum

If you can, take a workshop at the museum where they teach you how to make gingerbread. They pretend to be a witch and master in the 14th century, and it is a super fun experience. 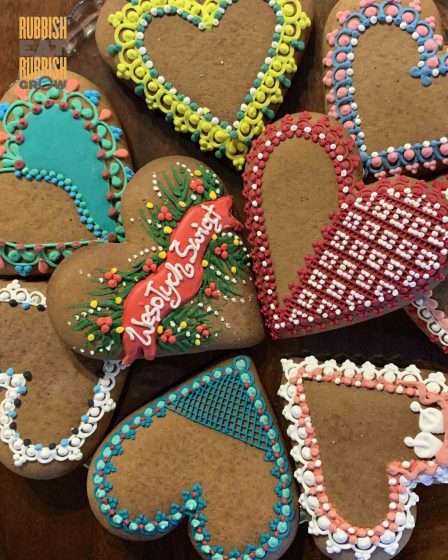 Learn how to decorate gingerbread

You can buy gingerbread here too. My parents ate an entire packet in less than a day. 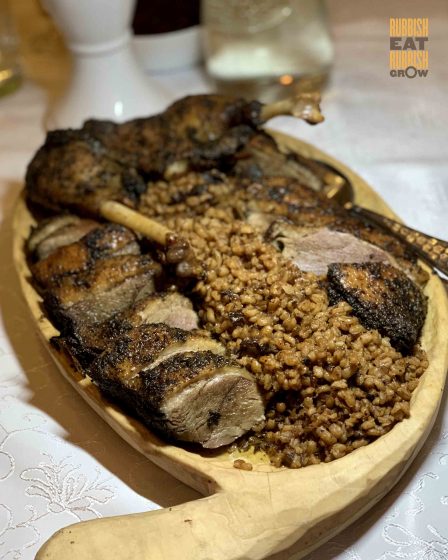 Baked goose at Gozdawa Palace where every ingredient is locally sourced

Poland is the largest exporter of poultry in the EU, so you should try their fowl.

While I still find the way Cantonese roast their goose superior to the baked goose at Poland because the Cantonese method allows a contrast of the crispy skin to the fattiness of the meat but Polish baked goose has melted the fat away, the goose tartare at Gozdawa Palace is divine. It’s simply added with salt, pepper, garlic, and two herbs (marjoram and savoury).

The tartare is super fresh and fatty without any gaminess. 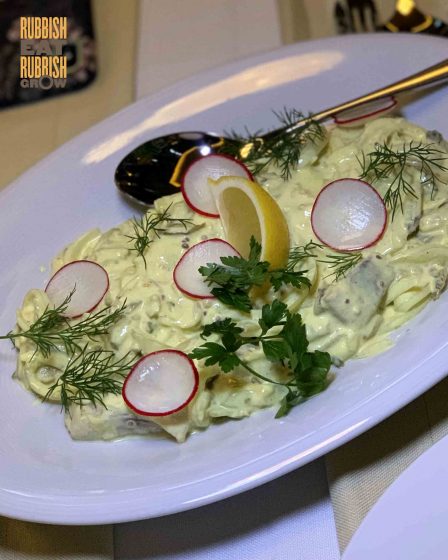 Herring in sour cream and apple at Pod Łososiem restaurant

Herring was a popular fish in 16th-century Gdańsk and remains so. If you find yourself in Gdańsk, which is known as the city of herring in a hundred ways, emotional and historical, go to the 18th-century restaurant, Pod Łososiem, newly renovated to imitate the exact decor 200 years ago.

At Pod Łososiem, we sampled 5 dishes of herring all done differently: Asian, pepper jam, sour cream and apple, sweet-and-sour, and a family recipe of salad. They are all excellent. 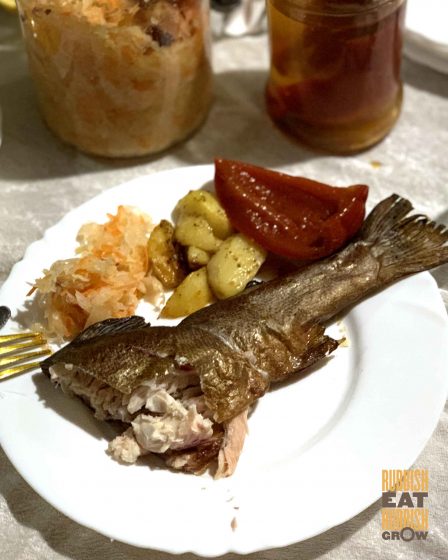 Pickled vegetables eaten with mains give an umami gestalt.

Fermented food is, of course, good for gut bacteria and immunity against common illnesses.

According to Iwona i Paweł Dziedziccy, the proprietor of Aktywna Agroturystyka (an agricultural farm), Poland is the only country that retains the original recipe for pickles. Pickling is part of tradition registered with the Poland government.

At the farm, Dziedziccy pickles cabbage and cucumbers himself. It’s a strenuous process but uses simple ingredients. Pickled cabbage, for example, uses 5kg of cabbage with 11g of salt and a splattering of carrots. Ferment it for 3-4 weeks.

Personally, I don’t like pickled food because they are sour. But at the farm, I ate it with smoked fish and roasted potatoes. The combination is really umami. 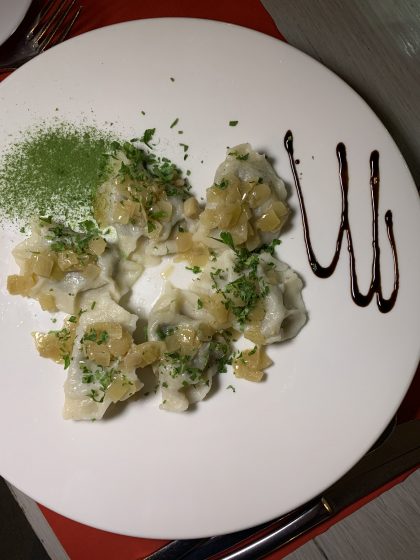 Traditionally, they shred potatoes and leave them for a day until they turn grey before adding flour to make dumplings. So remember grey dumplings are authentic Polish dumplings.

The dumplings can come in any shapes and forms. Sometimes, it’s wriggly strands like worms without any fillings usually found in soups, sometimes it’s a round shape, sometimes it’s filled with mushrooms or fish, sometimes topped with bacon.

While I don’t think it’s anything special, the Poles pair dumplings with their meat like the Americans pair steak with potatoes. 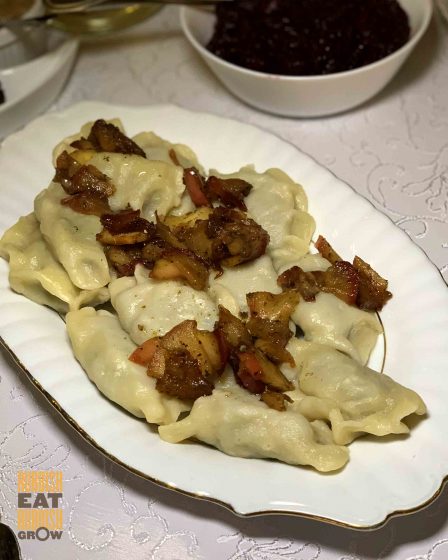 Pierogi with beetroot in the background at Gozdawa Palace, the goose specialty restaurant. 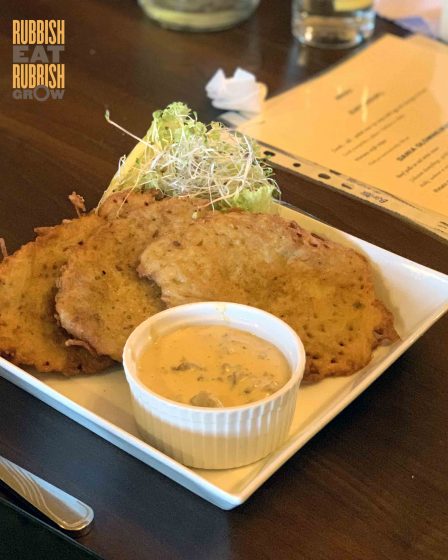 Sprinkle sugar on potato pancakes for the sweet-savoury flavour

Many blogs recommend the Polskie naleśniki (Polish crepes) but at the traditional restaurant, Karczma Pod Strzechą, we had thick potato pancakes (much thicker than crepes) with a creamy white mushroom sauce. It can also be eaten with sugar as per tradition. It tastes a little like prata with an extra bite and mouthfeel.

Depending on whether you ask a Pole or a Russian, Poland is the homeland of vodka with 500 years of history. It’s the fourth largest exporter of vodka in the world, after USA, Russia, and Ukraine.

Rumour has it that when Rolling Stones performed in Poland, they requested to be paid in vodka, not zloty, the Polish currency.

The Polish government treats vodka so seriously that they define what vodka is and any “vodka” failing the criteria won’t get approval. Vodka is either made from any 5 grains (rye, wheat, barley, oats, triticale) OR potatoes.

90% of Polish vodka are made from grains because they yield more vodka. 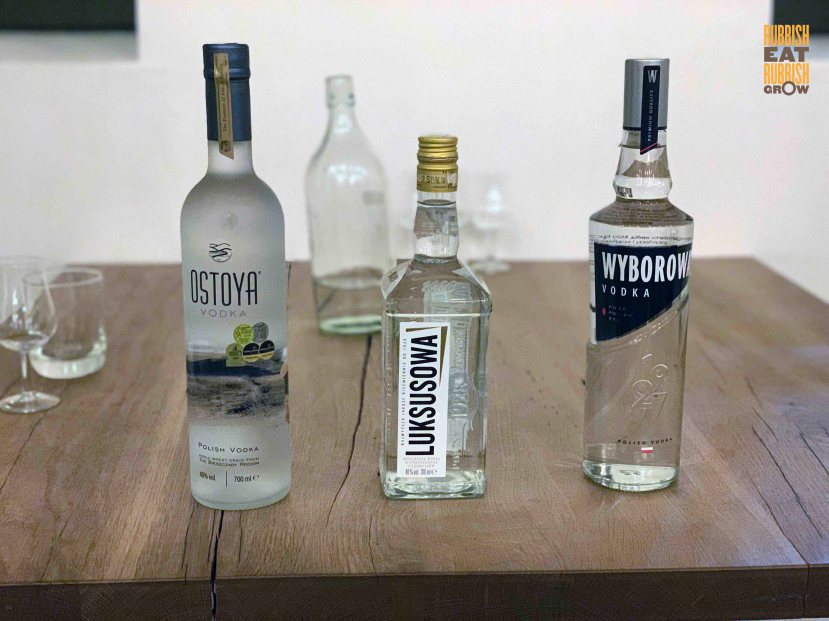 It’s best to buy and try vodka at the Polish Vodka Museum in Warsaw. After a tour of the museum, which is the original vodka factory since 1920s, go for the vodka tasting.

–Ostoya brand (made from wheat): Sweet honey, prickling acidity, not intense but long. Dry. Bitter like grapefruit at the back of mouth.

–Luksusowa brand (made from potato): Intense smell. Creamy, oily.  No burning in throat and stomach, burning ends in mouth.  High in starch.

–Wyborowa brand (made from rye): first made 90 years ago. Sweet everywhere on the tongue. Pepper at the sides of tongue. Sweet, fresh like spring. Burning at chest, not throat or mouth or stomach.

To recap, these are the 10 food to try in Poland: 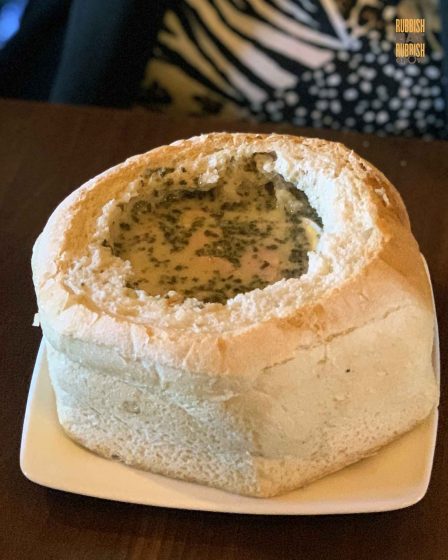 –Kiełbasa (sausage): as common as their dumplings

–Rosół (chicken broth): usually eaten on Sundays at mother’s or mother-in-law’s place, after clubbing on Saturday. As a hangover cure.

–Smalec (Lard): eaten on bread at the beginning of a 3-course meal.

You may be interested in…
–Day Trip to Paris from London
–Joel Robuchon, London, England
–Tax Refunds in London