Get off at Leicester Square station, walk along Charing Cross Road, turn right at Shaftesbury Ave to West Street. As long as you see Singing in the Rain theatre, you are on the right track, baby.

Along the way, you’ll see many theatres.

There are two options on the online reservation, La Cuisine and L’Atelier. The menus are the same, and the difference is in the seating. L’Atelier on the ground floor is counter top seating with the open kitchen in the middle; La Cuisine on the first floor is table seating with the open kitchen on the side. We chose La Cuisine because we wanted a table for three where we could see each others’ faces as we ate. When we were there, only 5 tables were occupied. 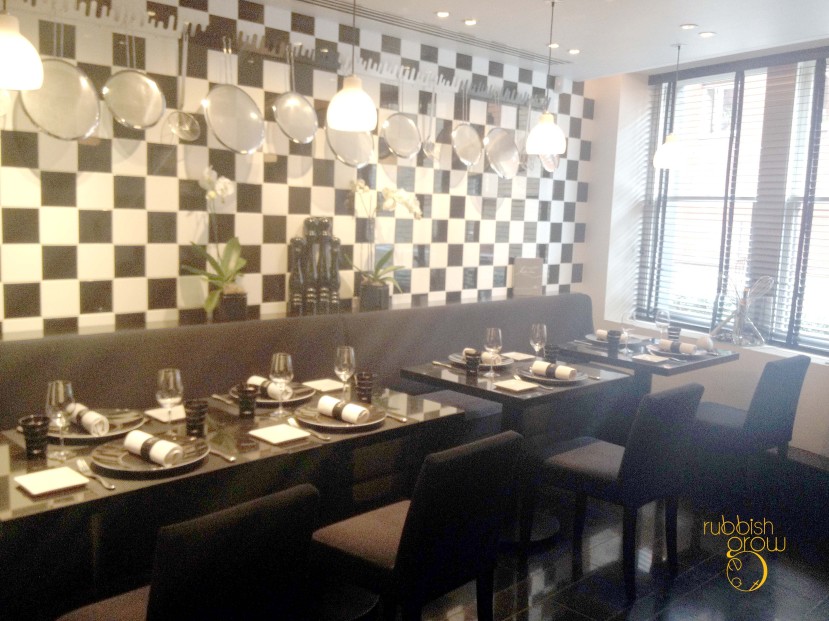 Decor: The walls are tiled with black-and-white checks, with pots and pans hanging around as decorations. The whole place was dim, with little light coming in from the windows. It was cosy but unsettling.

Thinking that it would be as good as Pollen Street Social, we ordered 3-course set lunch for only £32+ (add on 12.5% service charge).

Le Daikon – Cold daikon soup with beef jelly and foie gras
There was gold in almost all the dishes I ate. I hope I can shit gold.

After the meal, walk to Covent Garden where you can find Fred Perry, Ben Sherman, Burberry and some of the vintage/thrift stores around the area, although you will have better finds in New York. Covent Garden has a huge-ass Apple store where you can tap onto the free wifi or just play around with the ipads.

There is also a marketplace building where Hola Paella sells a medium sized plate for £6. It’s probably half a bowl of rice. Many people were eating it but don’t be duped by the smell and crowd. Move on; the paella wasn’t nice. 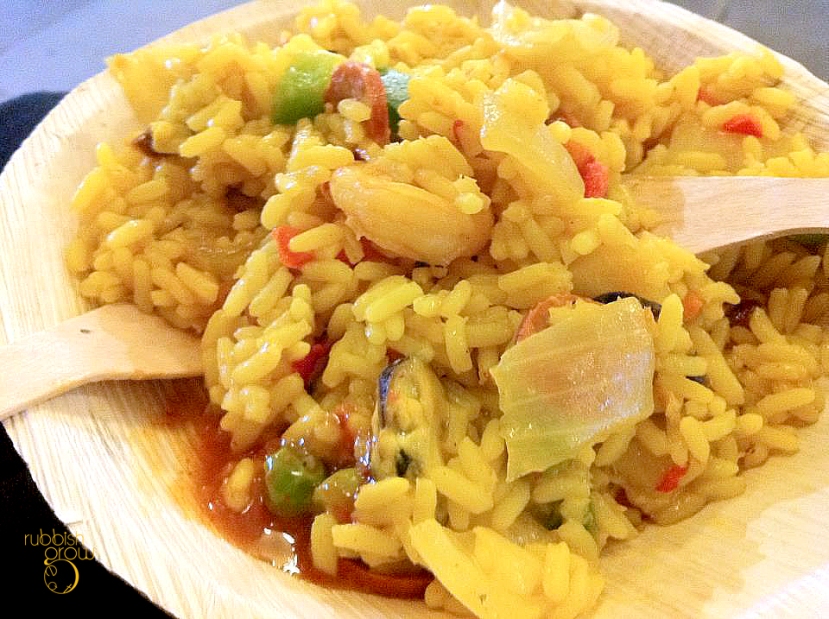 After Covent Garden, take a train to Bond Street to walk along Oxford Street. Visit the Selfridges which closes at 8pm. Along Bond Street, there’s a Primark store which closes at 9pm. We went crazy at Primark! Everything was so cheap! It is like “This Fashion” in Singapore but they have more exciting and fashionable stuff. Plus if you spend above a certain amount, you can tax refunds.

Harrods is every girl’s dream and a must go. Get off at Knightsbridge station to get to Harrods. Buy all your branded stuff here, if you can’t find them at Bicester Village, that is.

Portobello Road Market: Exit at Nottinghill Gate and follow the crowd. Please check the operating days for the markets in London. It’s usually from Thurs – Sat.

We loved Portobello market and bought many souvenirs. Try the Red Velvet Cupcakes from Hummingbird Bakery which are better than Magnolia Bakery in New York. Visit the 3 pound shop, one of a kind vintage store around the area. Also, you can find hawkers selling paella and other yummy nice smelling food that makes you super hungry while walking along the street.

We rested in Wafflemeister where you can ask the staff for the passcode for the wi-fi although the waffle wasn’t great.

You can then go to Borough Market (which Wise Guy went in 2009. Try the grilled cheese). If you are heading to Borough Market from Portobello Market, take the train from Notting Hill Gate >> Take Circle (Mustard) line towards High Street Kensington, after 7 stops alight at Westminster station >> change to Jubilee (GREY) line towards Stratford or Greenwich. Exit at London Bridge after 3 stops.

Check out Monmouth Coffee at Borough Market, where Steven Lim (from Growing Up) works.

For dinner, go to Leicester Square (Chinatown). Try the Four Seasons Restaurant in Chinatown which is famous for the roasted duck. Four of us polished up an entire duck. 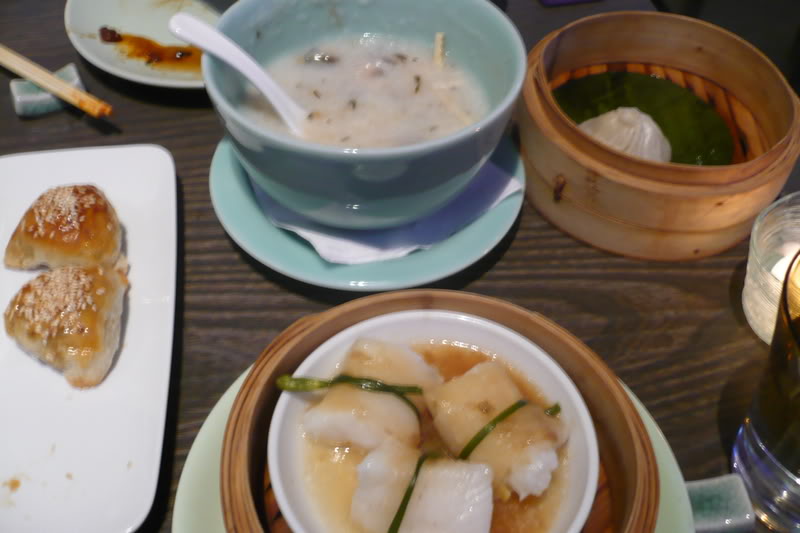 If you’re craving for Asian food like we did, another Chinese restaurant to go is the one-michelin-starred dim sum restaurant, which is the best dim sum Wise Guy ever has in his life when he was in London in 2009. The Xiao-long-bao (right) and the venison-tart (left) were nothing short of staggering and miraculous. The only word to describe them is “surprise.” I thought the xiao-long-bao would have little soup since it looked so flaccid but wow! the soup within the bun just burst in one’s mouth like sudden blossoming of spring. It didn’t even had the aftertaste of pork; it was pure ambrosia. The venison-tart, which we at first thought was char-siew-su, was even better than perfect: when we first bit into it, we just widened my eyes as if we were caught unaware by a thief creeping at night onto its unsuspecting victim. The crispy skin offset the molten venison meat  which was smoother and silkier than the usual bbq pork filling. It tasted less sweet but made up for a more rounded, fuller flavor. The substitution of venison over pork was very smart.The open concept kitchen means you can bio (ogle at) the hot angmoh chefs squeezing the buns. £28.88 for 2 people from 2pm – 6.30pm, Mon – Thurs. 8 Dishes with choice of Chinese tea.

We wanted to find a place to chill but most places were closed, except for drinking places but we wanted to stay sober to find our way back. We chanced upon Princi which was still bustling with life. It was so difficult to find a table so we just stood around. I had the Valrhona hot chocolate (£3.50) which was the best hot chocolate I’ve ever ever had. It was so gao (thick) and yummy.

At about 12am, we walked to Oxford Street and took a bus back.

Reserve this day for any places you want to visit but don’t have time to go. If not, visit Bricklane Market, Columbia Flower Market and Spitalfields. Check their websites for the opening days. Then dine at The Sea Shell of Lisson Grove.

Rumor has it that this place has the best Fish and Chips in London, not just from the Bicester Village tour guide on the bus, but also our friends in London. We were super excited to be there because finally, we could try some really good fish and chips. There is a takeaway area just beside the restaurant.

Yandao ordered the Haddock (£14.95) which was huge and I had Bangers and Mash (£14.50). If we had known the Haddock is so huge, we would have shared it. Free Wi-Fi here, ask for the password.

The haddock was quite bland and it didn’t live up to its name of being the best fish and chips in town. But bangers and mash were great. The mash has mustard seeds which gave it a special zing. The caramelized onions add flavor to the dish although the sausages were a bit too strong in flavor.

Other food places you may want to check out:

Try the quintessential pub grab for the English, kinda like cai-fan for Singaporeans. A casual place more known for its novelty of the name than the food.

The Lord Moon of the Mall 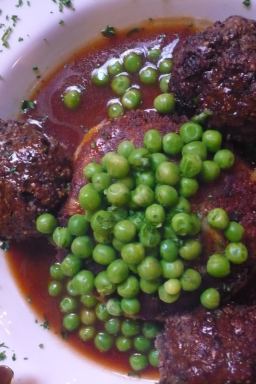 If you’re at Trafalgar Square and the National Gallery (free, worth going), try The Lord Moon of the Mall–what a name!–which has real ales on top. But what is most amazing is the decor and ambience. Very dark with dark wainscoting and plush carpets and a magnificent chandelier, transporting you back to Victorian England. The food is very traditional. Try the faggots with bubbles and squeak, steak and kidney pie and end with treacle pudding, all  food you read about in Charles Dickens’s novels.