We rejected the media invitation to Forbidden Duck at MBFC when they first opened so that we could write an honest and objective review. The restaurant serves Cantonese cuisine (including dim sum in the afternoon) by Demon Chef Alvin Leung. Leung is most famous for taking Chinese cuisine to the extreme at the three-Michelin-starred Bo Innovation in Hong Kong, where he serves edible condoms. But here, although there are some innovations, Forbidden Duck isn’t as audacious. 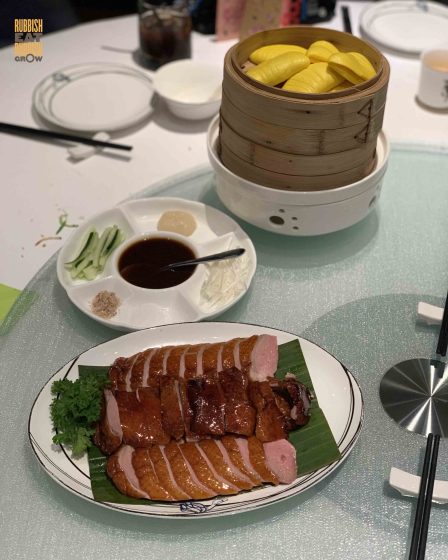 “Forbidden Duck” is a combination of Forbidden City in Beijing and Peking Duck, so it is forbidden not to order the signature slow roasted duck ($88), which is Leung’s version of Peking Duck. Instead of the paper-thin wrap, it comes with lime-yellow calamansi buns. I like the piquant sourness that goes along with the duck–I find the flavours refreshing and appetising–but most of my family disagree and claim that the calamansi unnecessarily distracts us from the duck.

However, we all agree that the duck is fantastic. It is slow roasted for 3 hours with a final burst of heat to crisp the skin: that’s why the flesh is still pink and tender although it is fully cooked. The best testimony is that it #sparkjoy for my nephew, who is picky with food. Definitely a must order.

The Iberico pork char siu ($30) is not bad but the fats are unevenly distributed so some slices may be overly fatty while others not so. It is also too sweet and could have more char. But when you are lucky enough to pick a piece with burnt ends, fireworks occur in the mouth.

It is easily to overlook the sweet and sour pork ($23) because it is a ubiquitous dish. We have all eaten it countless of times, with countless of renditions. So to many, Forbidden Duck’s version may taste ordinary. But here, they cook the pork with lychee, rose and hawthorn; and, to me, their version is above par, one of the best I’ve eaten in recent memory. The floral and fruity flavours balance the acetic side; and the pork is just the right amount of crisp, unlike many other versions which may be limp or overly fried. Because it’s a common dish, many people tend to overlook it. However, to me, a common dish is most difficult to execute and Forbidden Duck has made it their own. 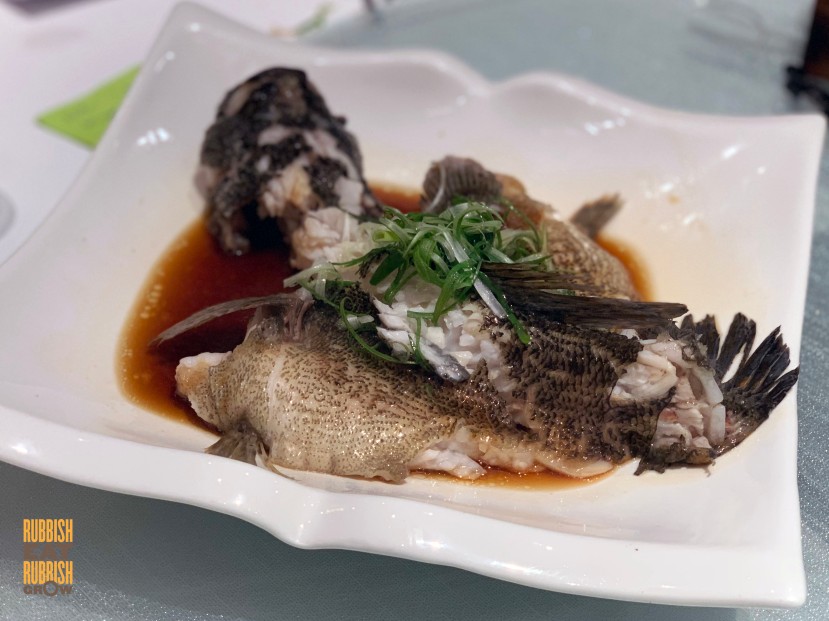 The menu states that they have a pan-fried marble goby (Soon Hock) with Soy Sauce (700g, $80) but I requested for it to be steamed a la Hong Kong style and they acceded to my request. The dish is competent without surprises.

The second must-order dish, besides the duck, is the lobster and vermicelli with black truffle har mi XO ($88, 3-4 pax). Usually lobsters are priced at about $50, and although the lobster here costs more, the vermicelli, slightly spicy, has absorbed the essence of lobster and black truffle, giving it an intense umami.

The secret of the third must-order dish, seafood rice in aromatic duck soup ($34, 3-4 pax), lies in the broth. It’s jam-packed with collagen and so freaking sweet. They use both normal rice and crispy rice to create a nice contrast in textures. I dislike soupy food but even I have fallen under its charms. 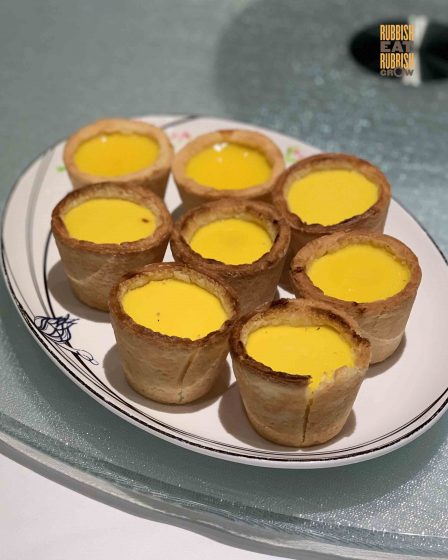 Luckily, we pre-ordered these egg tarts (2 pcs, $6) because they were sold out when we wanted more. There is a layer of yuzu at the bottom of the tart, so the server Qing cut it into half. Customers are supposed to eat the tart vertically, like you’re slicing a cake, so that you get bits of yuzu with egg. Bloggers and instagrammers rave about it, but the egg has liquid out of it, like dregs, and the tart shell is more Western-pie-crust than the Chinese flaky kind. It is definitely enjoyable, but Chiobu and I believe that Tai Cheong’s is still better.

Before the conclusion, I want to praise the service here. The lady manager in short (golden) hair and the server named Qing had definitely made our experience here very comfortable. They provided information and accommodated to our requests. They were friendly and cheerful. Even my diva sister acknowledged that they did an excellent job.

Reading the blog and instagram reviews by people who were invited to the tasting during the opening, I was initially worried that Forbidden Duck would be bad. When we were there on a Sat, it was worryingly empty for our CNY reunion. But the experience turned out stellar: the food was wonderful–order the duck, lobster, and seafood rice–and the service was outstanding.

Including an overpriced yusheng ($88), unlike the other pocket-friendly dishes, the initial price for 7 adults and 1 child was $578. (I read a blogger complain about the price of the Peking duck here. Has he eaten Peking duck before? Peking ducks are about this price.) But after the credit card discount, we paid $497. For a restaurant that operates under the aegis of a three-Michelin-starred chef, the value is pretty decent.