Circa 1912 at Lido Shaw has taken over the space of Lucky 8 and uses recipes from early 20th-century Lingnan cuisine. Lingnan is the old name from Southern China to Northern Vietnam, a region that housed people of Teochew, Hakka, Hokkien and Cantonese descents. The year 1912 is chosen because it was the start of Republic of China, and, as the menu states, “the start of a culinary flowering.”

On their menu, they wrote that the restaurant believes in three aspects:
(1) most sauces are made from scratch by hand using traditional methods;
(2) They focus on lost and canonical dishes;
(3) I quote directly: “we have TWO chef-scholars ‘tutoring’ our restaurant. Their studies and research inform the ‘should’ — how dishes ‘should’ be cooked and presented in historically accurate ways.” 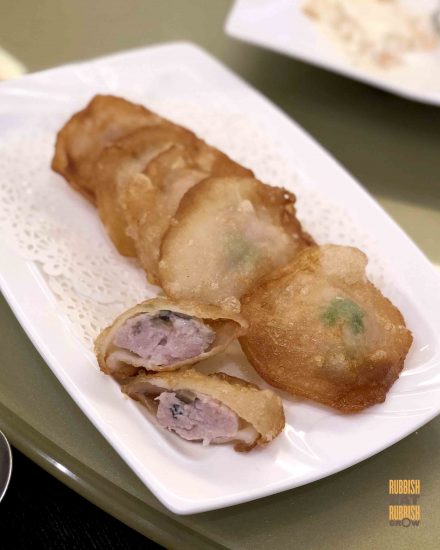 WOW. I was INCENSED reading the last point. Firstly, don’t use “TWO chef-scholars” to oppress us and tell us what to do; they are not better than us. The restaurant is using the power of the “TWO chef-scholars” to police us that if we don’t find the food tasty, it’s because we are uneducated and don’t know the food. It’s like that time Lee Hsien Loong told novelist Catherine Lim that if she wanted to comment on politics, go join a political party. Hey, even though we are not politicians, we can voice our opinions. Similarly, even though we are not “TWO chef-scholars,” our tongues can tell us what to think. Don’t use power to oppress us.

Secondly, there is no “should” in food. There are good food, mediocre food, bad food, but there is no ONE correct way to cook a dish. (See I can use capitalisation too.) Traditional dishes are passed down from generations to generations and each family has their own recipes. There is no ONE true recipe; this is not The Matrix, they are not Keanu Reeves, there is no The One. Furthermore, ingredients change with agricultural practices and time. There is NO way to reproduce food from 1912 even when using the same recipe simply because our ingredients, including farm animals, have evolved vastly with selective breeding.

Ok, calm down. Let’s give them the benefit of the doubt that the menu is poorly written and they need a good copywriter. Let’s give the food a chance since so many eminent foodies recommend it highly.

In a New Yorker article I once read, the writer said, “The tongue is suggestible.” It means that when someone tells you about how the food is prepared and how the ingredients are harvested or where they come from, and you eat it, you will think it is delicious. And this was what happened to us, and perhaps to the eminent foodies who praised the restaurant highly.

For instance, when I first tasted their signature dish, sweet and sour Iberico pork ($38), using hawthorn and strawberry instead of vinegar and ketchup, I thought it was terrible. It was overly fat without any texture and I thought I was eating oil and fruits. Then the chef-owner David Yip came to explain to us how it is cooked. They steam pure lard to render the fats away, so that, I quote him directly, the lard become “pockets of air” and then they process them as the usual sweet-and-sour pork. After listening to him, I tasted it again. This piece had some meat on it, and it was delicious. The acidity went to the sides of the mouth, making me salivate and crave for more. 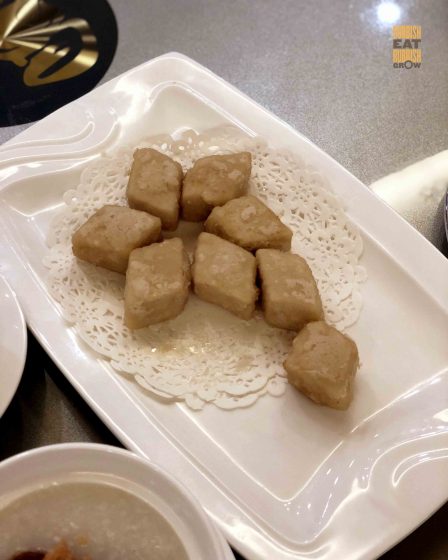 The same thing happened to the deep-fried superior stock and pig’s brain ($28, 8 pcs). When I first ate it, it was awful. It was smelly and disgusting. Then the chef-owner explained that they deep-fried stock, but to get them into shape, they use pig’s brain to gel them together. After listening to the process, I tried another piece, and, while it wasn’t delicious, it tasted more palatable and pleasant than the first piece.

The plain chicken-essence congee ($3/bowl) is highly praised because it consists of a mixture of glutinous rice, old and new jasmine rice, stirred continuously over high fire for two hours in chicken stock. It’s nice, but nothing spectacular. I rather go downstairs in the same building to Mui Kee for congee.

The wok-fried goat milk with chicken and seafood ($38) is smelly when it arrives but it is the dish that we all liked unanimously. It tastes like a savoury egg white. 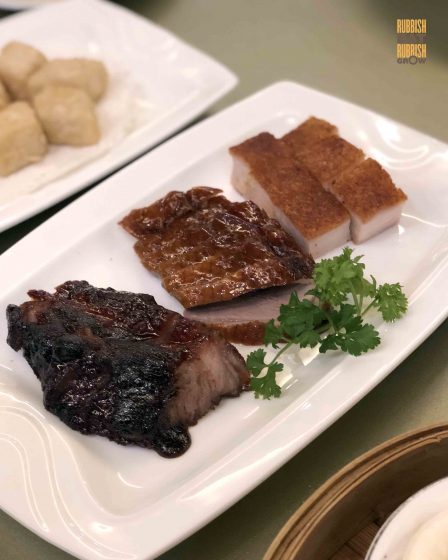 The trio of Cantonese roasts ($30) are pretty decent. The nam yu roast pork belly ($18 individual portion) does not have the taste of nam yu but it is nice. The roast silverhill duck ($18 portion, $68 whole) is roasted by stuffing plums in it, rather than using salt to marinade the insides. It is excellent, tender and tasty.

The crispy Iberico char siew ($28) is done the traditional way of using dou ban jiang as marinade, rather than char siew sauce, and then it is coated with sugar to counterbalance the saltiness of dou ban jiang. There are some grains of sugar on the char siew, giving it a great texture. I enjoyed the boldness of this dish a lot.

On the whole, all six of us at the table agreed that the meal was just okay: some dishes were bland or weird but other outstanding ones made up for it. We wondered why other food writers and critics praised the food so much. A friend also opined that if nobody explained the food to us, we would probably hate the food; luckily the chef-owner was around that day.

Also, just a general grouse: I am so sick of nostalgia. In the past, women, homos, and minority races had no rights. Not everything old is gold. If something isn’t good, if something has been evolved out of our society, do we really need to revive it? And how far back do we want to be nostalgic? Why stop at 1912? Why not year 0?

We paid $231 for 6 persons (technically, it’s 5 persons because a friend already had lunch and she didn’t eat much). It is a place you have to visit with an open mind. I don’t mind returning if friends and family want to try it, but I won’t actively recommend it.