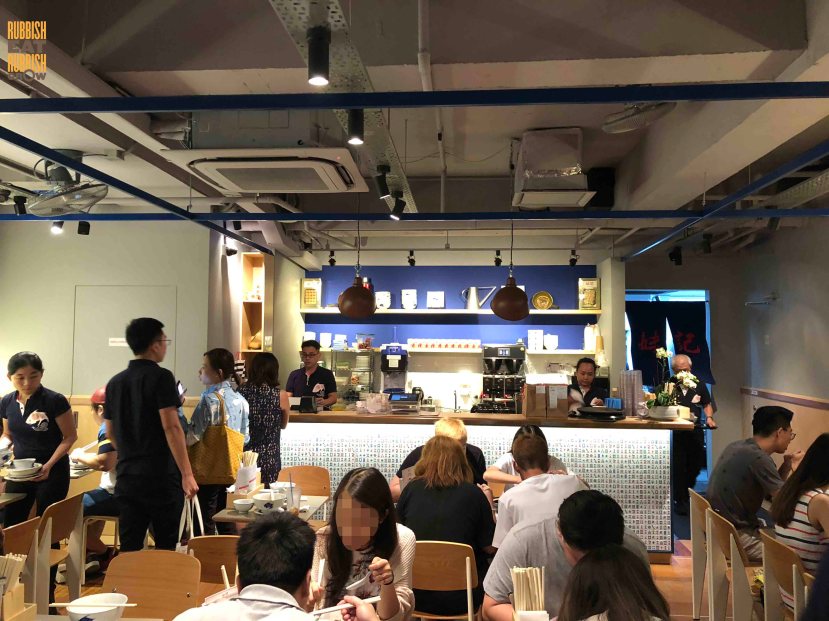 When we reached Mui Kee Congee at Shaw Centre at 6.30 p.m. on a rainy evening, we managed to snag the last table before there was a queue. But the queue moves quickly (since most people only order a bowl of congee each).

Mui Kee Congee started as a small stall in Mong Kok, Hong Kong in 1979 and today, the 35 year-old grandson, Pierre Choi (or affectionately known as Ah Tung), has taken over the reins from his late grandmother whom he trained with since he was 22 years old. The Singapore outlet is done in conjunction with the Les Amis Group and Ah Tung will ensure that the standards are consistent with Hong Kong.

Entering the restaurant was like going to Hong Kong. They play 80s Cantonese pop of Jacky Cheung and Alan Tam. The bar is made from mahjong tiles. We were surrounded by Hong Kongers speaking Cantonese. The friendly manager, who speaks Cantonese, has a 人缘 face; everyone who sees him will like him. Every time a dish arrived on our table, he said, Leng ye, leng ye (beautiful thing, beautiful thing), but I think he was talking about me, not the food, right? 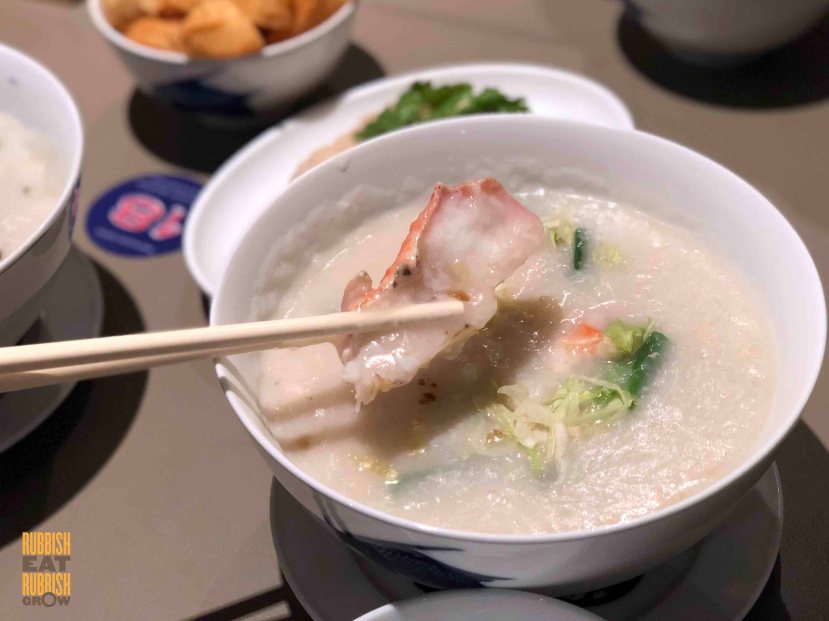 In the congee, there is NO artificial flavouring and NO monosodium glutamate (MSG). The raw rice grains are mixed with century eggs, and then pork and fish stocks are added, and the whole concoction is stirred every five to ten minutes for five hours.

There is a “wok hei” sign beside some items. How to get wok hei in porridge? They first sauté the ingredient for a few seconds in a hot copper pan that distributes heat evenly and can achieve high temperatures. So the ingredient is slightly charred to give that smoky wok hei when it is added to the porridge.

What does wok hei in porridge taste like? Actually, it’s mineral, almost like a tasty mineral water, thrown in with herbal tones. It adds a complexity to the congee; it is the first time I tasted a porridge like this, and it is excellent.

Out of the three congees we ordered, our unanimous favourite is homemade pork meatballs ($9.80), but perhaps it is unfair because we added century egg (+$2) and pork innards (+$2) to this porridge, making it sweet and delicious.

Our second favourite, the threadfin belly congee ($18), is also great. The fish is cut thickly, as seen in the photo above, and charred at the edges. Really fresh fish with a fantastic texture. They give many slices, so this pricing is actually quite worth it.

True to the adage that the most expensive isn’t always the best, our least favourite, Alaskan crab leg ($22), is nice, but it’s just crab added to the porridge without one ingredient interacting with the other. That said, the crab is stunningly sweet and juicy. Perhaps the sweetest crab I’ve eaten.

The claypot dishes are marvellous. You have, have, have to order them. The kai lan ($10) is wonderful; there is none of that yucky “green” bitter taste of kailan. Instead, it’s savoury and the garlic is mild, so it’s really great to eat them. 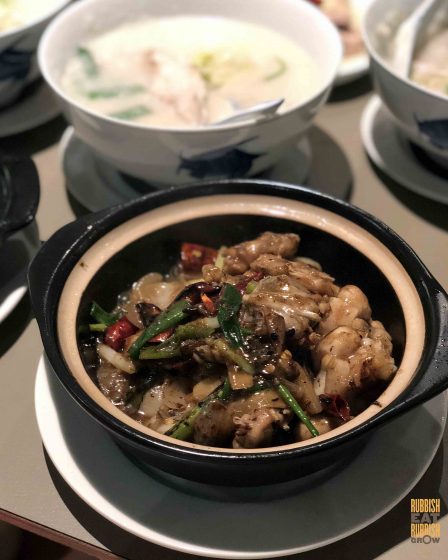 The frog legs with ginger and spring onion ($22) has a divine sauce that goes superbly in the porridge. Frog legs are meat-off-the-bone tender but still have an agreeable, chewy bite. Although there are some dried chilli in it, it is not spicy at all, not like our gong bao style. But still, this is full-on spectacular flavour.

The pork liver with ginger and spring onion may sound to have similar flavour palette as the frog legs above but it tastes completely differently. The liver is cooked so perfectly, charred on the outside and still slightly raw in the middle. HOW DO THEY DO THAT??? Best liver ever.

They don’t provide you tiao (fritters) for free, and they should; we had to pay $2 for some over-crispy you tiao. (Good you tiao should have a soft core like dad bod.)

Including some splendid not-sweet herbal tea ($2.50/cup), we paid $142 for three persons. But we over-ordered. Usually, people order a bowl of congee each and share ONE claypot, and it is probably $20-$30 per person. We ordered so much that the manager came around and cheered us on in jest, “You can do it! Carry on eating!” (We ta-baoed the leftovers in the end.)

By the way, on top of the outstanding food, the service is also first-rate because they employ enough staff; they were 6 service staff for a small restaurant of about 40 seats. That’s a ratio of about 1 staff to 7 guests. That’s why the service is swift, efficient, and polite.

I run out of synonyms of “amazing” for this review.