Wan He Lou is an established name, having been around for 4 years, and most people would have heard of it. Chef Lau Siaw Dee used to be The Orange Lobster at Orchard Central and moved to Wan He Lou.

The 6-course set menu starts from $35/pax. There is also a menu for 6 persons at $368++. They created some new dishes to cater to modern tastes. 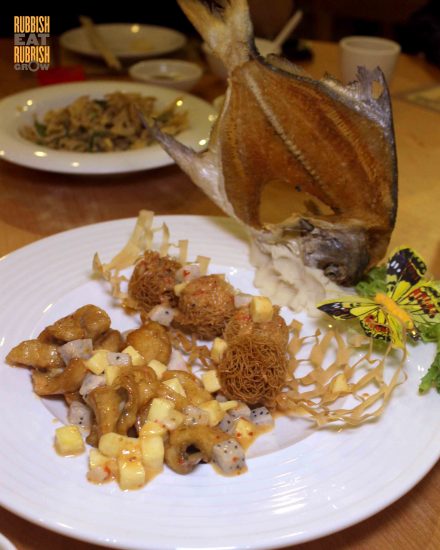 Despite the theatrics of the pomfret dish–with an inverted bony pomfret and a butterfly by the side–the dish is rather tasty. The deep-fried fish slices are tossed in a tangy, fruity sauce. The mango and dragonfruit serve to undercut the oilness of the fish (but there isn’t any oilness). However, I don’t quite understand the skeins of pastry balls at the side; the one that I ate is made wholly of pastry. Strange. I was expecting something inside.

The signature of the restaurant, lobster porridge ($39.90 onwards) is a fortuitous invention. During one of his regular diving trips, Chef Lau caught a lobster. And as they were on an isolated island, he made do with whatever ingredients he had at home and created the dish.

This dish would go on to win the top prize at Beijing Olympics culinary event in 2008.

The best thing about the Teochew-styled porridge is not the lobster, although the lobsters are fresh and succulent. The best thing is the broth. There is a thick, grainy texture to the broth that tastes like what liquid salted egg yolk would taste like (no eggs are used in the broth). It can be very addictive for some people, like Chiobu and Mr Fitness! They couldn’t stop slurping it.

The only dish we didn’t like, truffle pork chop ($19.90/$34.90), is actually one of the most popular in the restaurant. Young people order it and like it. Three out of four of us found it tough. I thought it was ok, but I didn’t appreciate the bitterness, that lingered in the mouth long after I swallowed it.

Happily, the meal ended with a high note: coconut pudding topped with coconut ice cream ($9.90). It is in good balance; everything is only mildly sweet so you can enjoy the ice cream, pudding, and the “meat” of the coconut. Big enough to be shared between two persons.

This was the second time Chiobu and Yandao visited Wan He Lou; it was Mr Fitness’s and my virgin trip. Although the pricing is a little high, the food is quite good, and the restaurant has been decorated to reflect a modernity. Great homely service. If we happen to be in the neighborhood, we would consider visiting it again.