Do you remember the 90s when Singapore radio censored the word “bitch” from Meredith Brooks’ song? Stations played the song, but the word “bitch” was replaced by a beat of silence even though listeners, young and old, knew what the censored word was. How far we have come to be able to name a speakeasy “Little Bastard.”

The experience at Little Bastard started at the door of The Refinery, a restaurant that serves Japanese fusion food, under the humongous sign “115KG” which is my weight. (JKJK… I think.) There is a reception stand and the receptionist asked me, “May I help you?”

“Yes, I have a reservation at LITTLE BASTARD.” Suddenly, I wanted to cry. It was the same sense of liberation and relief I felt when I was in US, that I could say whatever I wanted, be whoever I am, without being judged. Was I really in Singapore?

An older gentleman behind me at the reception brought me back to reality. The receptionist asked him how she could help him. And he stuttered with a blush, “Er… yeah.. I’m going to this place… this place… called… Bastard, or Bastard whatever.”  Incredulous. We are in the 21st century and this guy couldn’t bring himself to say the word BASTARD, BASTARD, BASTARD. Yeah, this is the Singapore I know, unfortunately. (And I would have preferred that the Refinery’s receptionist had finished with me first, before handling the next guest behind me. It’s rude to talk over your customer.)

The receptionist handed the older gentleman and me to a waiter who led us to the back of the Refinery where there is a bookshelf storing crookery. The waiter flung open the bookshelf to reveal a secret bat-cave. Ok, no, not bat cave. It was a dark, narrow stairway; sounds of Cantonese clucking, mahjong tiles clashing reverberated the alcove.

I have been to many speakeasies in Singapore, and I won’t be easily impressed. But at the top of the rickety metal spiral staircase, I was excited like a child on Christmas. The bar was a mahjong den with mahjong tables. The naked lightbulbs provided sufficient light and the jazz music was at a decibel to fill in awkward silences and not impair h2h conversations.

Chef Gabriel Tan, who cut his teeth at Oxwell & Co, Hashida Garo, and the defunct Maca, has developed an extraordinary and creative menu, combining Cantonese and Thai cuisines. There are only 11 dishes on the small menu, and my eating companion and I had 6. A passel of 4 should be able to order everything on the menu.

Little Bastard does carbs well. Our favorite is indubitably One Night in Tom Yum ($20) which makes a hard man humble. It is a chilled dish, Japanese Inaniwa udon (which is similar to mee sua) and sweet crab meat in an intense tom yum consumme. It looks effete but it’s sweet, very sour, and rather spicy. Refreshing, interesting and delicious. MUST ORDER.

The lu rou fan (braised pork rice $18) uses Duroc pork which melts in the mouth like ice cream on a hot day. The texture comes from the rice patty which is seared on both sides. What I like is that even in such a traditional Taiwanese dish, there is innovation, like the cucumber slices, dressed with vinegar and mint, undercutting the grease (but there is none).

The charred rice bowl ($3) is similar to the claypot rice. Like other dishes, this one is complex. It has a strange pungent taste, which mellows into a savoriness, ending with an uplifting sweetness.

The best meat dish, duck confit penyet ($20), is the French duck confit with Indonesian flavors. Crispy skin, softest flesh. Normally I would complain about the chilli–it has little heat, it is sweet with an aftertaste of spiciness–but it works exceedingly well with the duck. 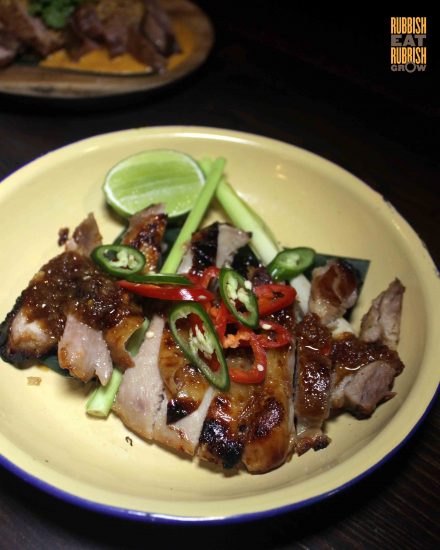 The other two meat dishes need some work. Shadow leg (nam jim gai yang $24) is slow grilled chicken thigh that has been marinated with lemongrass for 12 hours; it’s not bad but it is not salty enough and the flavor palette is too similar to One Night in Tom Yum, their star dish; if you order one, you shouldn’t order the other.

14-hour sous vide Iberico pork collar (kaeng phet mu $24) is very fat but not greasy, and comes with red curry. But it is too soft without any texture and the pork by itself has no taste. This pork could do with some salt and a quick searing before serving.

In the year of the cock, drink lots of cocktails. The bar is tended by Ahmad Shah Herman, or affectionately known as Big Shah. Although he has worked mostly at clubs, his Asian-inspired cocktails are delicious, innovative, and goes with the theme of the bar. There are interesting concoctions such as Gui Hua Tai ($20, osmanthus cocktail) and Miss Siam ($22, tom yum cocktail).

Simply Yeo’s ($18) plays on the iconic Singapore drink, Yeo’s. Although there is no chrysanthemum in the drink, it tastes exactly like the Yeo’s chrysanthemum. It consists lemon peel sous vide in gin, barley, pandan leaves, bird’s nest, and fresh lemon juice simple syrup. A refreshing aperitif to begin the meal.

The cut-leg milo png ($22) is made from some complicated ingredients such as bourbon sous vide with with milo and vermouth infused with coffee beans, but it tastes like Bailey’s. Our least favorite is rum-based mama’s kaya toast ($24), which is sour and eggy.

Little Bastard is popular for their alcoholic dessert cocktails. Big Shah makes all the desserts himself. “It’s a challenge for me since these desserts aren’t in my culture,” Big Shah told me. But they are very good, better than most dessert places. The chng tng gao ($18) is laced with brandy, and the alcohol of not your average chendol ($22) is in the caramelized pineapple that has been sous vide in Jagermeister. The chendol itself has no alcohol but is still delicious.

Like the name of the bar which pushes the propriety of polite conversation, the food and drinks nudge the culinary scene forward. The food is fantastic, each dish has the superiority of complex flavors and matching textures and a surprise element. The cocktails are fun and delicious and at the appearance of looking easy, they take some behind-the-scene hard work to create. Definitely one of the best places we have visited lately. Will be returning to it.