This restaurant has been one of my to-check-out list for a long time but you know, the place is really quite ulu. It’s called Bistro One Zero. Guess the address? 103 Pasir Panjang Road. That’s in the the middle of nowhere. (Well, ok, if you drive, it’s quite convenient.)

The driver had to be one who was late. OF COURSE right. So by the time we arrived, (it was a double date, quite exciting), we were famished. But two of them HAD to smoke. So my date and I went to the restaurant first.
It was strange because it was so… homely. I had expected it to be dark and sexy, something like a date place, but it was like the first storey of someone’s home being converted to a restaurant, with remnants of the home. And bright too, no hanky panky places.
We stood at the entrance for a while and couldn’t see anyone, so we walked in. And the servers said they would show us to our table shortly. And we stood like idiots at the door. It was not the servers’ fault. (See how objective I can be.) The service was impeccable and the servers were cheerful. I don’t know how they managed to be happy despite being so busy. My date and I came to a conclusion that this is a family business and the chefs (you can see them cooking, like in a house kitchen, very homey) are the parents and the servers are the children.
Still standing at the door, we were gawked at by a couple who were eating. The staring was quite uncomfortable. Later we found out that they might be food critics as they stayed behind to talk with the daughter. (I said, “Ooooh, then it makes sense that they were staring at me because they recognized me. I’m #40 on HGW, you know.” And my date said, “Ha ha, yeah, they may be #100 so they see you like you’re their idol!”)
So hungry, we quickly ordered steak fries first. No steak fries, will wedges do? Ok lor. We already ordered and my friend asked, “So what is their speciality here?”
I said, “er…”
She said, “you’re the food critic!”
And I actually felt so guilty I kept apologizing! I have been remiss in my duty! Sorry, sorry! I am so silly.
When I checked that their speciality is their pork neck that comes with wedges, I asked my friends if they wanted to cancel the wedges. OF COURSE NOT. 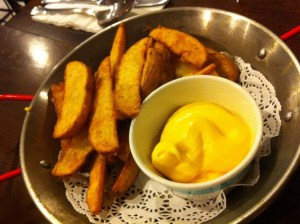 Wedges are created equal but some wedges are more equal than others.
My two friends and a date all said that the wedges were salty. I was like WHAT? Are you crazy? There is no salt? We thought that the wedges were tossed unevenly. But I ate three, and there still wasn’t salt on them. So I said, “Why don’t when you guys taste a salty one, pass it to me?” So smart right? Then when I got half of a wedge, I licked it, bit it but there still was no salt. OMG OMG OMG I cannot be a food critic anymore. I’m losing my delicate sense of taste.
But on the contrary, my taste buds are actually the most sophisticated among us because I didn’t find the wedges salty. In fact, the wedges were quite perfect. They were very different from the average cafe’s wedges. My friend, who hates wedges, said that the more she ate the wedges, the better they got. The cold dip–cheese with mayo I think–went wonderfully well with the wedges, bringing out the contrast of the hot wedges and cold dip, of the cheese and potato. I hate potato-related food (except for potato chips), but I like this! Even the wedges are fantastic, something really different. The difference was very subtle, but you have to eat slowly and taste properly.
Do you know why the wedges are different from other places? They actually cut the potato themselves, didn’t buy from those ready-cut ones at supermarkets! It’s dedication, man. 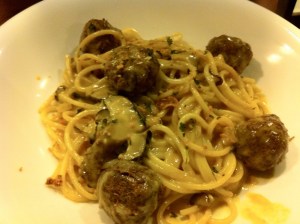 My funny date has strange eating habits. The last time I dated someone with strange eating habits, it didn’t work out. I love my food too much; and TheLastTimeOne was too picky. That one couldn’t even eat mushroom. This new date is diabetic (the hereditary kind), couldn’t eat desserts or sweets or carbs. He also doesn’t like any meat that is in the shape of, well, meat. No drumsticks, no fish, etc. Only beef patties, so he’s very low maintenance. Always bring him to Mcdonalds lor. I don’t know if this can work out, because trying new food is a big part of my life. Let’s see.
So he ordered meatballs curried pasta. (meatballs are not in the shape of meat.) He claimed that the curry powder wasn’t infused into the pasta and was in fact quite separate. I tasted half a meatball and it tasted powdery. Ikea has spoilt our taste in balls…is something a food critic shouldn’t say. He gave it a 3.5/5.

My friend ordered salmon. When it came, it had a pungent stench of vinegar. Too strong. I disliked the “aroma” immediately. My date, more sophisticated, said, “I thought it’s the smell of worchestershire sauce.”
I ignorantly said, “I thought worchestershire sauce is mostly used on steaks.” But according to Wiki, my date should be right. It’s a fermented sauce (hence the smell) for meats and fish.
My friend, who is NOT a food critic, cannot describe the food, except giving it a 3.5/5.
I think when I tasted it, I was kinder. I think it is nice but come on, it’s salmon. Nothing can go wrong with it, but it can’t taste fantastic either. it’s like selecting a bad song on American Idol you know. Safe but boring, cannot showcase the vocal talent.

My friend’s date, the one who tasted the subtlety of the wedges, ordered a fish too. She gave me a morsel and I thought it was quite amazing. When they asked me why amazing, I said, “Better than Fish & Co lor.” Ha Ha, I am such a great critic.
let me try again. The fish was very fresh, without the fishy stench and obviously this didn’t come from some frozen product in supermarkets. The chef probably skinned and cut this fillet out him- or herself. It was fried in a such a way that the bread crumbs was crispy but not oily. In fact, the entire fish didn’t seem oily. Overall, the soft tender fish, instead of fighting with the crust, compliments the crumbs, bringing out the fullness of the flavor of the fish.
My friend, who at first thought the fish was ordinary, said that she found it nicer and nicer as she ate it. See my judgement is right. I am always right. I am the food critic.

And as a food critic, I choose my food wisely. I have good taste in all things, including fashion and men. Beef stroganoff with rice. And luckily I still remember how to pronounce “stroganoff”! It’s not “strong-gan-off”, it’s “STRAW-gan-noff.”
I always thought stroganoff is just beef stew, but now that I just checked wikipedia, it’s beef in sauce with a dash of sour cream. It was initially a Russian dish but it went to China, and the Chinese brought it to the world. As usual.
This dish WINS. The beef wasn’t especially tender, and the sauce wasn’t exactly bursting with favor, the saffron was tasty but not fantastic but when all three added together, you know what it tasted like? It tasted like home and homely love it could make you cry. The unpretentious and lacking-in-sophistication of this dish really hit your “inner soul.” If you go to a Michelin-starred restaurant, you would think this is a normal dish, but if you go to a home-style restaurant, this is real, good, nutritious food, food without MSG, food that your parents would cook. Very, very nice and satisfying.

Home-made ice cream and home-recipe brownie. WIN right? This restaurant is dedicated to the MAX. I love this place. But unfortunately, I’m sorry there is no delicate way to describe it: the brownie tasted like dog food. I know, I worked in a pet shop, I have a golden retriever. I tried it three times, and nearly puked. Sorry. But…

Panna Cotta. BEST I have ever eaten in my life. Seriously DELICIOUS. You know every time each of us noticed the word on the bowl, that person would say, “Delicious.” I think there is subliminal advertising here. But seriously, the thick milk chocolate, oooh so chocolatey, went so well with the yellow custard-y portion. It was ORGASMIC. I can give up 3 days of sex for 1 serving.
I really like this restaurant a lot. It gives off a very warm, cozy, homely feeling. The food is so sincere that it can make a rock cry. Full of win here. Even the brownie is a win, it’s like a bad dish that your partner makes. Even if it tastes horrible, it is still made of love and dedication, man. So EAT THAT BURNT AND CHARRED FOOD, people, don’t complain.
$112 for 4 persons.
Bistro 103
103 Pasir Panjang Road
S 118531
Tel: 6476 6373
Email: bistro103@yahoo.com.sg
Tue-Sun (except sat): 1130am-3pm; 6pm-9.30pm
Sat: 6-9.30pm
Close on Monday
Call to make reservations. Even though it was an ulu place, a couple was turned down at 8pm because the place was packed.
Rating: 4.419/5 stars