This restaurant is touted to be the first and only Myanmar restaurant in Singapore. When I walked in, I told my friend, “Eh, is this Thai Express?” Because the decor is almost the same! With orange as the main color and chairs and tables similar to Thai Express.

We were there for dinner and it was very silly. The buffet costs $16.90++ per person and the set dinner costs $14.90++ per person and they serve the same thing. Who in the right mind will take the set dinner, right?
While waiting for the food, my friend said, “Aung San Suu Kyi is from Myanmar, right?”
I said, “No…I think she’s from Laos.”
“What’s the difference between Myanmar and Laos?”
“Laos is the capital of Cambodia, and Myanmar is the capital of Burma.” HA HA HA. We need to travel around the region more but first, we taste their cuisine. 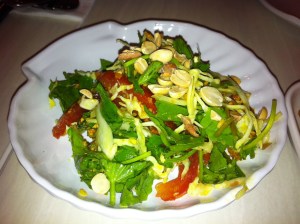 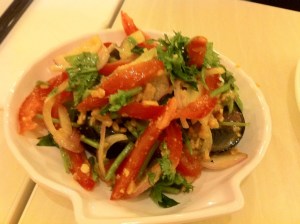 Century Egg Salad
The Pennywort salad is supposed to be their famous dish. When I read this on HGW, I thought, “Huh? Salad also can be specialty meh?” My deep rooted prejudice for green leaves stems from my childhood refusal to eat greens. You know why vegetables taste horrible? Vegetables are living being too! Their horrible taste is their defense mechanism. Don’t eat them!
What is Pennywort? It is just a kind of vegetable. What is special about this dish is the dressing. A little bit like chili oil and curry. Quite interesting but if I were the owner of the restaurant, I won’t call this my specialty.
Century Egg Salad was great! Century egg really goes very well with greens. I thought this was quite innovative and tasty. 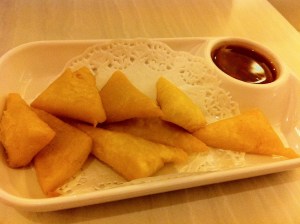 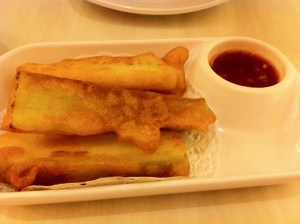 Gourd Fritters
We didn’t order any fritters at first but the waiter insisted that fritters are very Burmese. Ok lor, I’m a sucker for authenticity, eating Burmese food in Singapore, so I ordered lor.
The tofu fritters were good in the sense that it was firm but inside, the tofu was soft and jelly.
What Gourd did they use? We asked but the waiter couldn’t explain. When we tasted, the texture felt like cucumber but it wasn’t. In any case, this is quite tasteless. So save your calories. 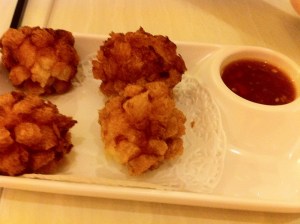 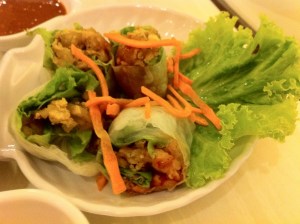 Spring Rolls
Prawn balls – ok.
Spring Rolls – At first sight, I thought the spring rolls had something deep-fried inside; that would have been interesting because instead of frying the entire roll, they fry something to stuff in the raw roll. But unfortunately, it just looked like a fried thing. I can’t remember what it was, so the roll tasted “healthy.” 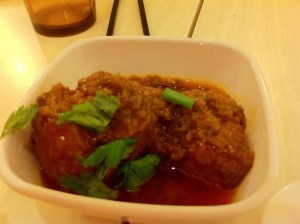 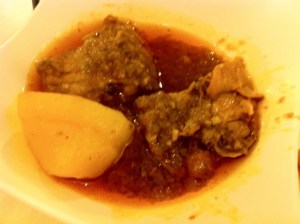 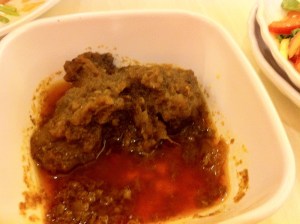 Pork, Chicken & Mutton Curry
Sorry, I can’t remember which photo is which curry, as you can see, they are triplets. I was quite disgusted with the pork curry because it had a very horrible pork stench. Ambivalent over the chicken curry, very tender but over oily. Mutton didn’t leave an impression. 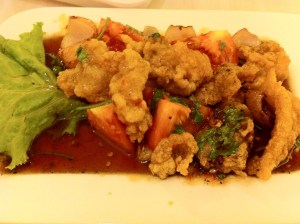 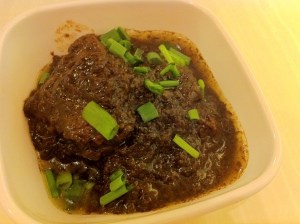 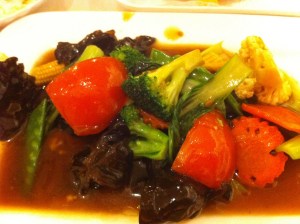 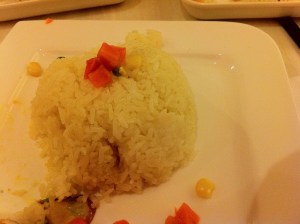 Buttered Rice
Assorted Vegetables – My healthy friend wanted fiber. I would have gone for kangkong with garlic but he picked assorted vegetables. Again, this is very similar to the Chinese style.
Buttered rice – DISH OF THE DAY. Wow, so much butter, so infused into the rice it must be 1000 calories a bowl but it’s worth it. 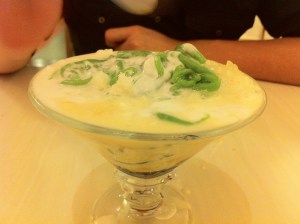 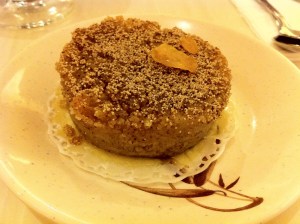 Semolina Cake
I never go without desserts no matter how full I am. Desserts are not included in the menu and cost $1.90 each.
Burmese Chendol has no red bean. That is the only difference.
Semolina Cake – Semolina is a kind of wheat. When I first saw this, I thought the texture would be like chee kway. But when the fork struck into it, it crumpled into grains. Hey, view the world in a grain of sand Semolina ok? My friend disliked this but I thought it is quite unique and don’t mind eating it again. The grainy texture means it’s rough, but there was a certain sweetness to it, the sweetness was between brown sugar and fragrance of rice. Very subtle.
So yes, we tasted almost everything on their menu. Not much variety?
Service was prompt.
Inle Myanmar
6 Raffles Boulevard
#02-201 Marina Square
S 039534
T: 6338 8772
http://www.inlemyanmar.com.sg
Rating: 3.681/5 stars