The first thing that you need to know about Bonta is NO BERMS. Men have to be in shirts and pants. So I wore berms and we had to sit outside, which spoilt my mood because it was a hot afternoon. You’d think that any restaurant with a strict dress code–even Gunther’s, the top #13 restaurant in Asia allows me in berms–has high standards but it is not so.

My friends took advantage of the OUB promotion to order set lunch for $34 per person. So they had: tomato soup for appetizer; steak for main; and mango ice cream for dessert.

The tomato soup wasn’t from campbell! I took only a sip and I thought it was just right, not too sour, but not overly sweet. The steak was good but normal, wasn’t very special. The mango ice cream was a downright rip-off. Come on. 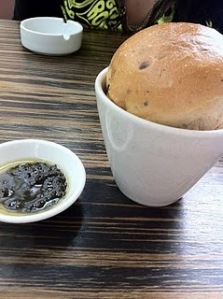 The free bread, however, was the bomb! It had cheese within; there were also walnut, raisins, tomato, making the bread very fragrant, although I wonder if it is too heavy, having the possibility to spoil one’s appetite.

I ordered goose liver ravoli and for dessert, the dessert trio, which came up to $60 after taxes.

When the goose liver ravioli came, it was so fragrant with the scent of truffle oil. So I asked the China waitress if there was truffle within, and she smiled at me stupidly. And I asked again. And she said, “No, this is goose liver ravioli.” Of course I knew what I ordered. So I asked again, and she said, ‘Maybe there is a drizzle of truffle oil.” I don’t mind her not understanding my question, given that she is from China, but “Maybe????”
In good restaurants, the servers know the ingredients that go into the dish and explain to you the dish as they put the plate on your table and if they don’t know, they would go check with the kitchen. The correct answer to my question of whether there is truffle in the dish is “I’ll check with the kitchen, sir, and get back to you.” You don’t answer “maybe” and be done with it. Obviously, the servers here, although they are polite, are not trained at all. This cannot be considered to be a “good” restaurant and yet they have a strict dress code? Come on.
When you cut into the goose liver ravioli, the oil oozes out. It was so amazing. At the very first bite, the mozzarella cheese–I’m guessing it’s mozzarella here since the servers don’t know–combined with the goose liver and the cream gave such an orgasmic feeling. The taste was so rich, full-bodied, substantial. It was so brilliant, and possibly one of the BEST things I have eaten in my life.
And very smartly, the chef only gave 5 ravioli, because any more, the dish would be very jer lak (surfeited). But as I got over my orgasm, and carefully tasted the food, I found that the pasta wasn’t very well done. The skin of the ravioli was too thick, like the pasta was undercooked so the taste of flour was subtle but noticeable,. And two of my ravioli stuck together, which was unacceptable. To separate them, I had to break the skin of both. I mean, what if I wanted to put the entire ravioli in my mouth and break it with my tongue? The taste of this dish is definitely 5/5 stars, but I wish there were more heart in its execution.

Dessert Trio ($18). It consists of a tiramisu, a lava chocolate cake and a surprise dessert from the chef. And what was the surprise? Bread pudding. Oh come on! Bread pudding, really? It’s just a slice of bread with sauce on top. Even an ice cream would be more acceptable.
My second complaint about this dish is the lava chocolate cake was broken! with the chocolate spilling out. (I sent it back to the kitchen and the photo is taken at the 2nd time.) My friend commented, “You would think that a restaurant that doesn’t allow berms will have some quality control in their food and will not allow a broken lava cake out of their kitchen.” Precisely. Even TCC and Starbucks lava cakes are whole. And I can wear swimming trunks in starbucks.
I said to the China waitress politely, “The lava cake is broken.”
And she smiled at me and said, “Yes?”
I was stunned for a while and replied (still very politely), “Do you mind bringing it back to the kitchen and getting me a new one?”
Now she was stunned. She said, “You mean you want a new one?”
“Of course. How would I know if someone has licked the chocolate?” And she didn’t say anything and snatched the plate. Throughout the conversation, I was very polite–I’m always polite to service staff, ask my friends–how could she have given me attitude? At the very least, she should apologize for the quality of the food; the chef should come out and apologize for it. Or even if there is no apology, the least she could do was to come back to me and inform me of the waiting time: “I’m afraid you will have to wait 10 minutes for us to bake you a new cake.”
The dessert returned. And all three sucked. Skip the dessert.
By the end of the meal, because it was closing time for lunch time, the waiter actually had the cheek to bring us the bill without our asking, kept wanting to clear our food although we hadn’t finish it. A good restaurant would never do that. I was at St. Pierre and the restaurant closes at 3pm for lunch but my friend and I hung till 5pm and the waiters were so polite, even asking us if they could hail us a cab.
Overall, I am disappointed with the restaurant. The restaurant should have used the OUB promotion as a chance to showcase their food, to promote their food, but instead the food on the OUB menu can be found anywhere. Not unique at all. Why would I come all the way to UE Square when I can get the same food 5 minutes away from my place? Secondly, the restaurant pitches itself as “classy” but the service staff are worse than starbucks. At least the people at Starbucks know what goes into my coffee. Thirdly, the chef needs to put in more heart in preparing the dishes. The cooking was very slipshod, such as my stuck-ravioli and the broken lava cake. There is great potential but it is ruined by bad management and lack of dedication.
Bonta Italian Restaurant
207 River Valley Road
#01-61
UE Square
6333 8875
website
Rating: 3.3992/5 stars