Imperial Treasure is most proud of this branch so they employ a very good manager. A good manager really makes a difference to the service, 14K says. When the manager is around, the dishes are changed after each dish. But when we were there, the manager was at another branch, and the service was a little sloppy and rude.
However, 14K, a regular, still managed to get us a booth, which was luxurious. There were two leather chesterfield sofas, plumped with cushions. So comfortable. Social connections matter! Be an MP! or be Sun Yan Zi!
We ordered (in the order the dishes came):
Roasted Pork ($10) 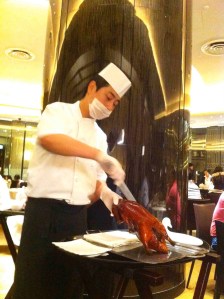 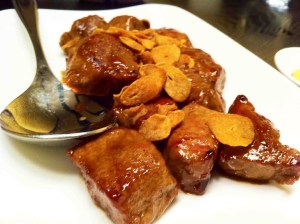 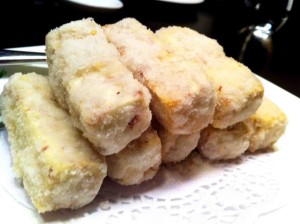 14K and hookerlily liked the stuffed crab with cheese very much. It takes an hour to prepare the dish so you have to order in advance. But I thought it was ok. I liked that it was piping hot but I thought anything baked in cheese can’t go wrong.
Another dish which they liked and I didn’t is the roasted pork, which wasn’t oily, and had a good skin-fat-meat proportion. But I thought it was cold and bland.
One dish that I did like is garlic beef because I thought from the cube shape that it was going to be tough. But wow, it was so soft and tender, lightly coated with soy sauce so that the it enhanced the beef taste, not masked it. But they thought it was ordinary.
The rest of the dishes were ordinary.

That’s 7 courses. We ought to have stop at 4-5 and I think I particularly regretted saying yes to the Peking Duck. We all said yes when the waitress recommended. I regretted because it was expensive and wasn’t particularly exciting or good. Just normal. If we didn’t order it, the bill would come up to about $45 each, but with it, it’s $65 each, an extra $20. If it were $40, then I would recommend this place. But at $65, I think I’d rather go to Summer Palace or Pu Tien or Xin Li Yuan. I really should go Xin Li Yuan again and write a review on it.