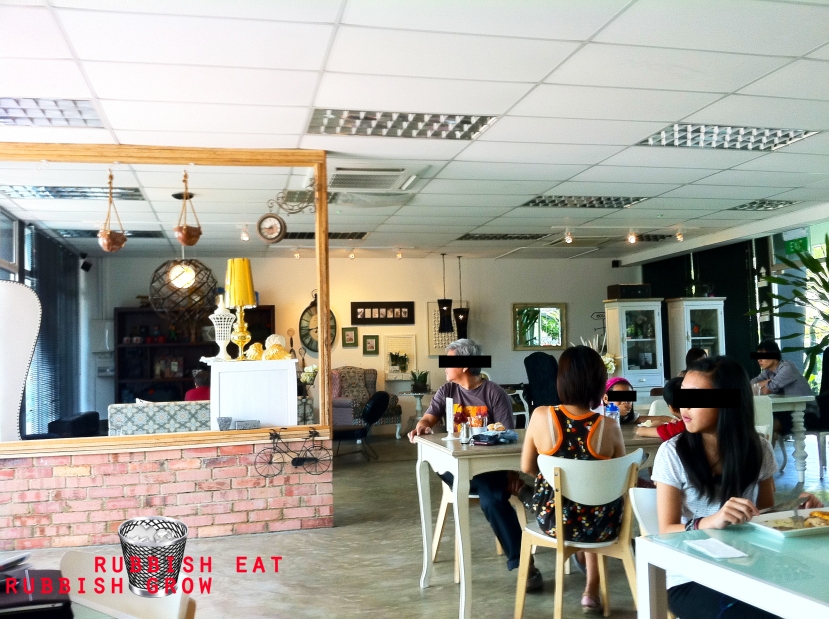 14K wanted to give me a surprise and drove me to this place. I said, reading the sign outside the cafe, “WOW! Thanks! That’s very sweet, bringing to UJJ.”

The cafe is situated in a very ulu area, where the Singapore Association for the Deaf is. There should be a few kindergartens nearby since I saw many children there. I find that the cafe seems to be situated in a wrong place since they are attracting many families with children. I say this because the cafe is under Egg3, a curios shop at Ann Siang Hill. The curios shop is slick and expensive, but the cafe here is more family-oriented; both the images clash. This cafe also sells curios. 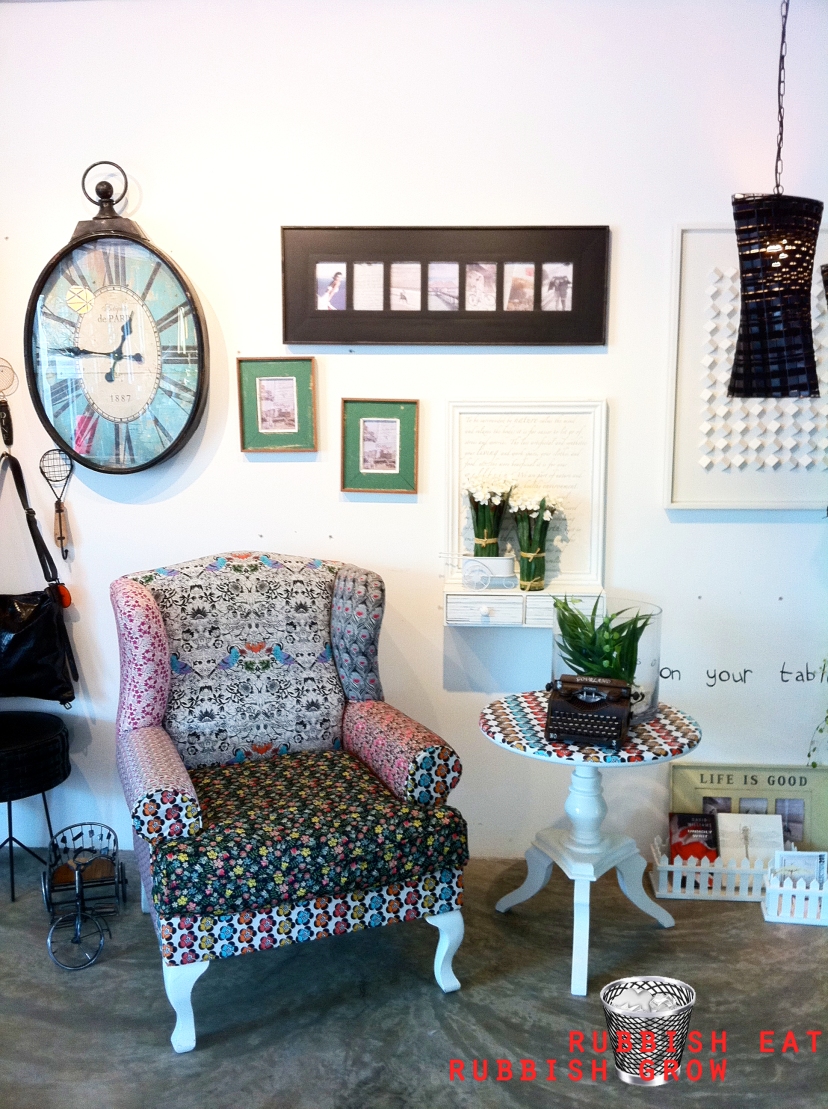 14K secretly made reservation already. But our table was near the kitchen. There is no divide between the kitchen and the cafe, so the ventilation is very bad, and you end up smelling like the food. We requested to be move. Remember, if you make a reservation, ask for a table far away from the kitchen.

One characteristic of the cafe is slowness. The cafe can only hold maybe 6-8 tables, and there are two servers and yet two servers seem unable to handle the patrons. That being said, the servers are friendly and polite and attentive – but slow.

Another slowness came from the food. Remember that this is 6-8 tables and other people had already started eating. We waited some time for the food. If you’re a starving Ethiopian, then you’ll be tormented by the aroma of the food and probably die first before the food comes to you. This could be a scene from the SAW movie series. 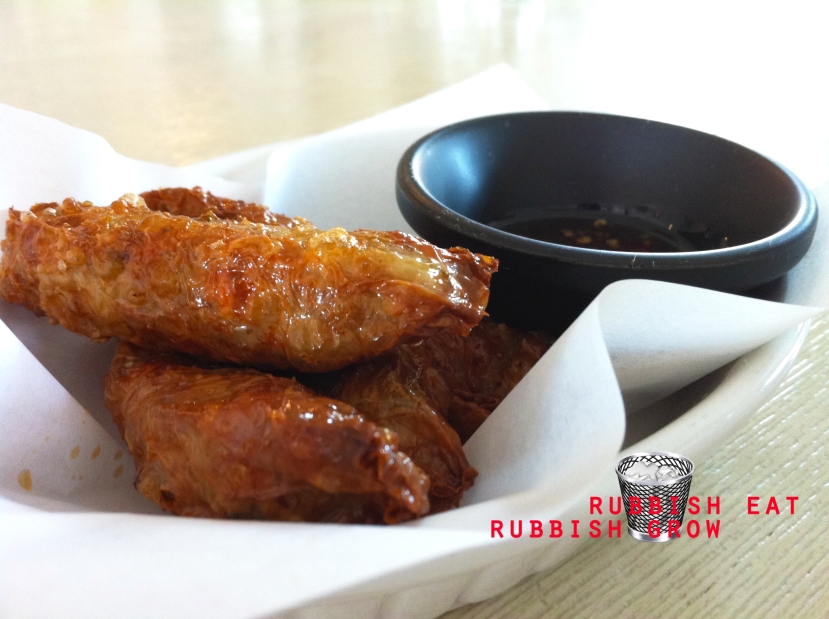 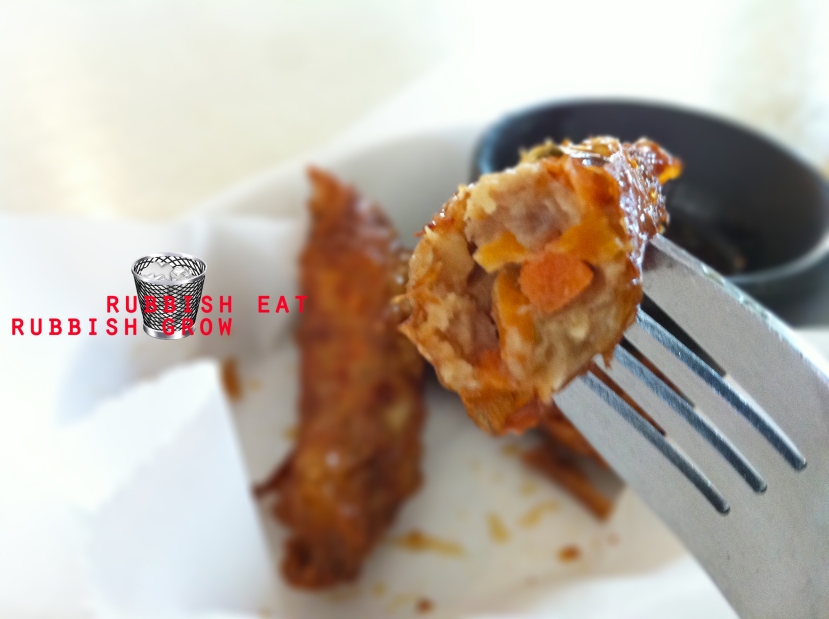 But, when the food came, they were all delicious.

The 5-spice roll ($5.90) was too little to justify the price. 4 thumb-sized pieces for $6, that’s one thumb for $1.50. In China, you can get a human kidney for the price of an ipad, so I bet a thumb wouldn’t cost $1.50. The 5-spice roll was a little greasy but it was sooo fresh! Normal 5-spice roll, you can only taste all meat, but this one felt very light with crunchy carrot and water chestnut? The meat wasn’t grinded as fine as the hawker one, and the meat was marinated for some time so the meat soaked up all the sauce, but at the same time it was not as salty as the hawker version. Very yummy. 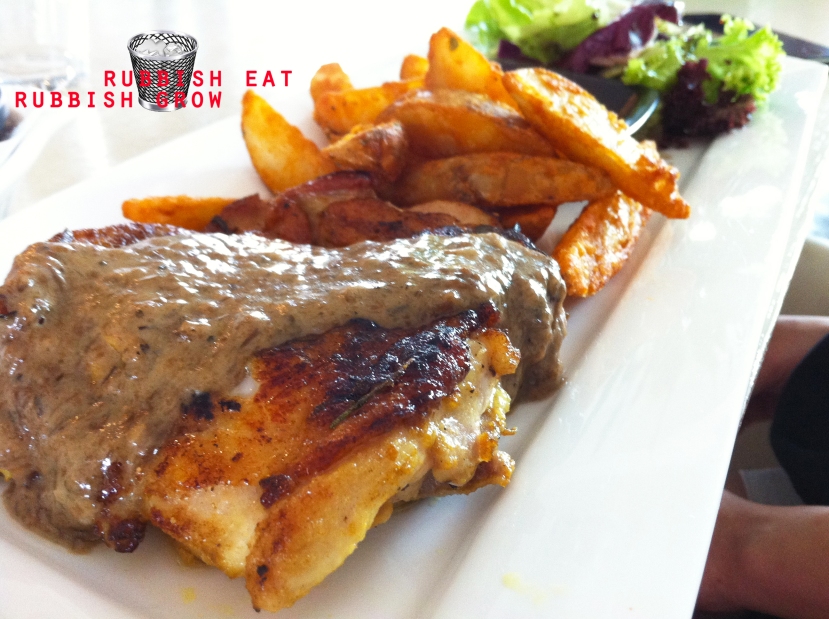 14K had the pan-fried chicken with mushroom sauce ($15.90). While the wedges were run-of-the-mill supermarket kind, the chicken was especially tender and well-marinated enough to eat it on its own without any condiments. 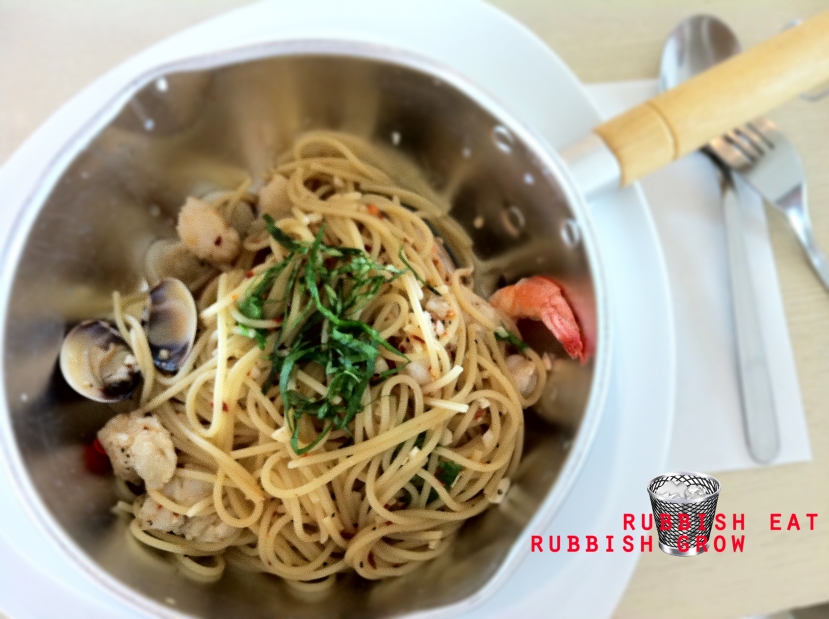 I had the speciality of the shop, seafood olio aglio ($22.90). Olio aglio simply means garlic and olive oil based but this one was infused with white wine, which gave it its fragrance, and with peperoncini, which made the dish chili-spicy, something the server didn’t tell me. I like it that the pasta is slightly overcooked from al dente because I like my pasta softer. The seafood taste was immersed into the pasta itself. It was a well-done dish but it’s not something I couldn’t cook myself. I also felt that the price is too expensive, considering you can get a huge packet of mussels at $3.90 at NTUC. I’m an NTUC aunty. Don’t judge. 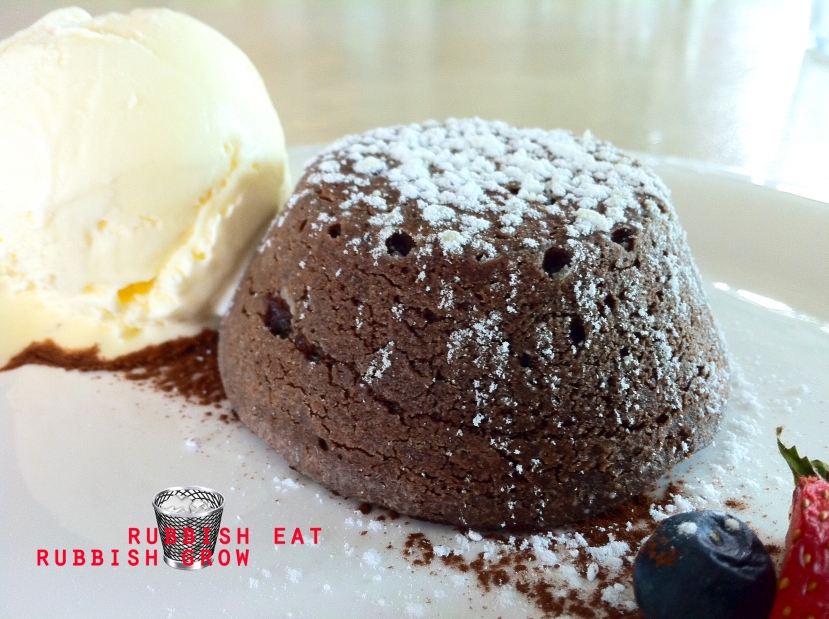 No meal is complete without a dessert. Got the lava cake ($6.90). Is there any other choices when lava cake is on the menu?? Fact: Chocolate=sex. And this had to be one of the best lava cake I’ve eaten. There was a richness to it and the sweetness wasn’t over-done, so there is no feeling of excessiveness. Quite well-done.

All the food have a homecooked wholesomeness to them. Love the food, but the price can be cheaper, the service could be faster and there should be better ventilation. But still recommended!