Strictly speaking, 2fifteen Kitchen isn’t a kitchen but a proper restaurant that serves European-inspired cuisine. Helming the kitchen is Chef Kenny Yeo, who worked in a 3-star Michelin restaurant in France and Les Amis and has cooked for Lee Kuan Yew. Given the eminence of the chef, the food is rather reasonably priced: Weekday Set lunch at $25-$30; weekend brunch at $30.

For our dinner, we requested to add foie gras on burgundy salad (available for set lunch). Burgundy salad tasted very Asian to us: baby spinach, sauteed mushrooms, poached eggs. The foie gras was impeccably seared, crisp outside, and the buttery meat went well with the salad, giving it a rich, creamy taste. The grape came as a surprise and was sweet, almost wine-like, to the savory dish. 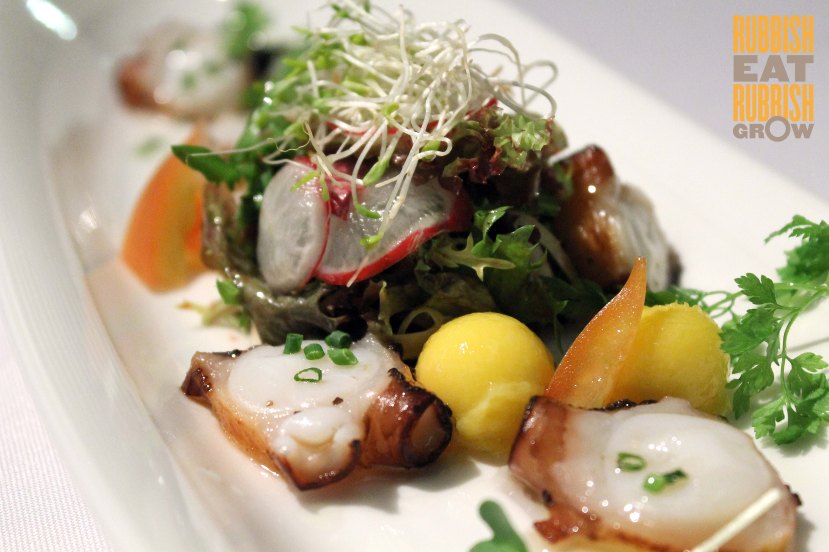 The octopus leg (found in degustation menu or $28++) was even better. It was infused with rosemary–rare to add herbs to seafood–and slow-cooked in oil for 65 degrees celsius. It was then seared at the edges. In our mouths, we couldn’t detect any oil. Instead, it was very tender and juicy, without the slimy texture that octopus sometimes has. Pairing it with a salad of candy-tasting raspberry vinaigrette and pearl mango made the dish fun and refreshing.

When you boil lobster shell for the lobster bisque ($16), a bestseller here, for too long, it may turn bitter. To counterbalance it, Chef Yeo added flower crab meat and, as a twist, roasted pistachio that layered the texture of the soup and gave it a nuttiness. When I feedback-ed that I’d prefer the soup to be thicker, Chef Yeo responded that he doesn’t like to add cream or starch; he wanted to ingredients to speak for themselves.

Another specialty is the fusion dish, prawn cappellini or Angel Hair Pasta ($26) in aromatic oils. Although the pasta was a tad dry and stuck together, the process of cooking was onerous: prawn and lobster were infused in oil for 40 minutes before such intense flavors could be coaxed out. The oil was then drizzled on the pasta and mixed with kombu, Japanese seaweed. 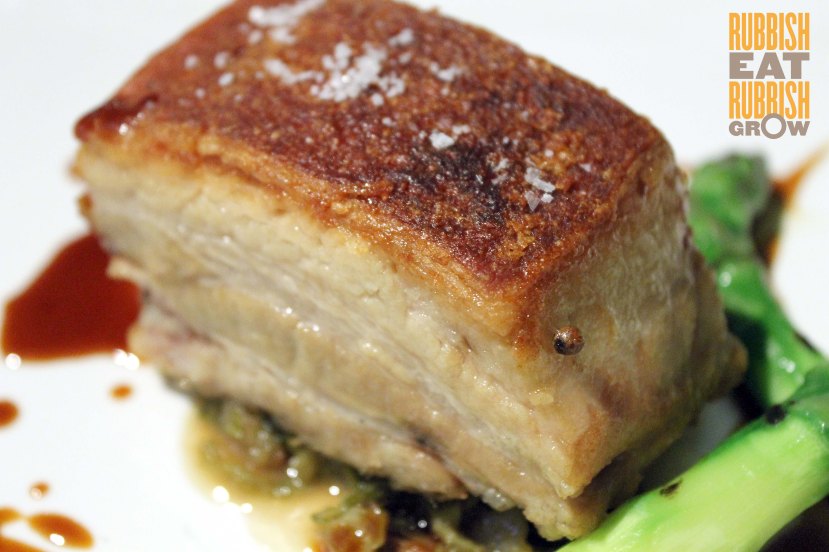 The gigantic, fist-sized slow-seared pork belly ($30) was well worth the calories! The meat could be inconsistent, dry at the bottom, moist and tender in the middle but it was not oily or fatty. The crackling skin with sea-salt crystals was divine. What we thought was kam-chai (salted vegetables) below the pork was actually cabbage sauteed with cider vinegar and bacon. Its purpose was to balance the oil from the pork but there was no need at all.

Requiring 20 minutes of cooking time, the visually magnificent tower of a salmon roulade confit ($28) had, within the roll, herbs such as chives, tarragon and chervil.

Chiobu is turning out to be the most critical contributor of our team and found the salmon was too fishy for her liking. I think we should change her nick to Complain Queen. I, however, liked it especially when I ate the fish with crunchy wild rice in hazelnut oil and poultry sweet jus. Very hearty and very Singaporean, like cai-fan. 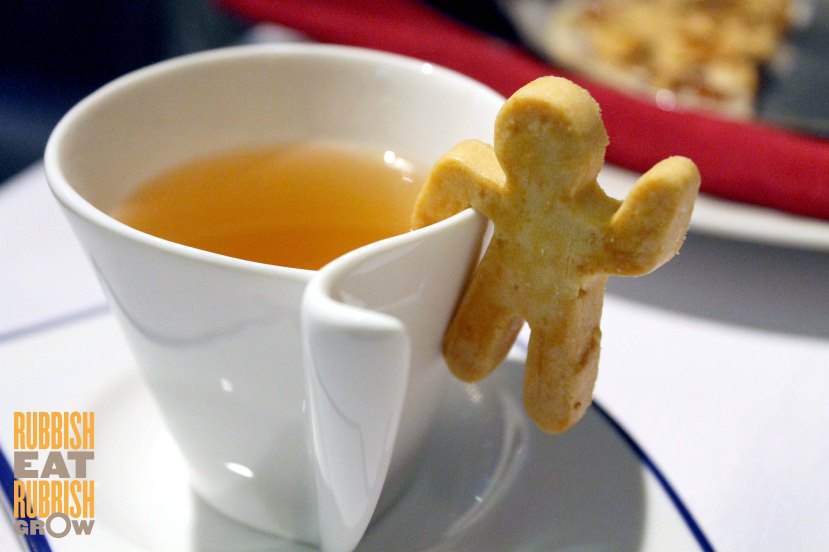 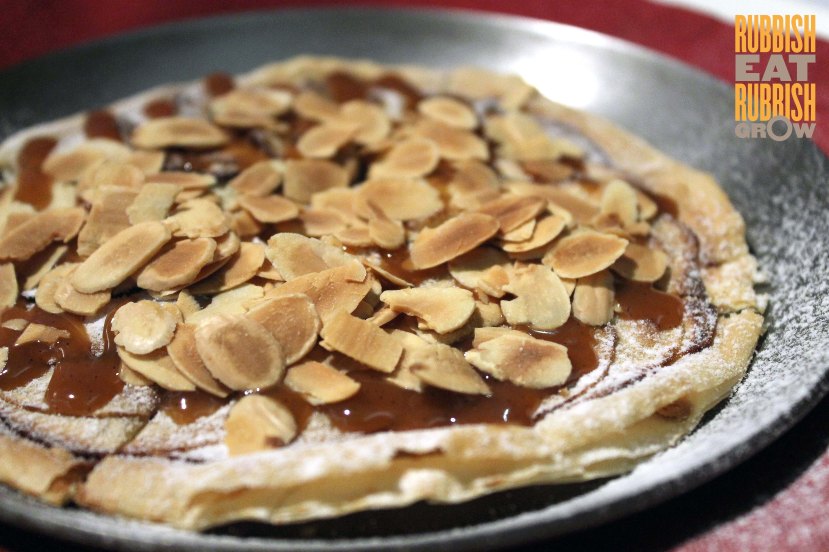 Of all the categories of food, the desserts were the best. The apple tart ($16) came on a paper-thin flaky, crispy crust, with equally thin slices of granny smith apples, a refreshingly sourness that was nullified by caramel sauce and roasted almonds. Vanilla ice cream was served at the side, not on the tart, so that it won’t melt.

The selection of desserts ($24) was equally wonderful. Usually I don’t like cakes, or sponge-desserts because I always think that desserts should be cold after a hot meal. But these were chilled. Chiobu’s and my favorite was unanimously the vacherin, brittle meringue as the base, tart passionfruit ice cream, with cream on top. We couldn’t get used to the salty taste of yuzu-matcha cake and believed that the saltiness overpowered the subtleties of the citrus and green tea. But the other two were fantastic: the hazelnut chocolate cake had different layers of textures and tastes from bitter to nutty while the nougat was surprisingly soft like chilled vanilla cream with bits of nuts.

Although the food could be more innovative, it was reliable and won’t disappoint, ranging from above-average to good. People who work or live around the area can give it a try.

PS: Thanks for the invitation, Jolene, Bjorn and Chef Yeo.