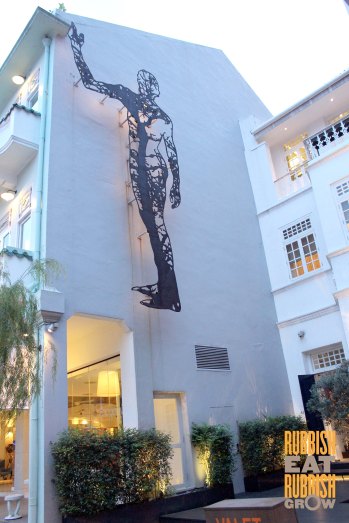 It is impossible to over-exaggerate the accolades that Restaurant Andre receives: #2 restaurant in Asia (Miele Guide 2012), “10 Restaurants Worth a Plane Ride,” that is a 24-hour plane ride (New York Times), #68 in the world (San Pellegrino 2012), and most recently, best restaurant in Singapore and #5 in Asia (San Pellegrino 2013). We have heard friends lauding it to the skies but we have other friends who claim it “over-rated,” “boring,” and “by the fifth dish with truffle, I’m tired of truffle already.” So it was with great trepidation that we made our reservation. After all, it wasn’t everyday that we spent S$288++ per person on a meal. Was it a complete travesty, flushing money down the toilet, or was it triumphant, better than unicorns galloping on rainbows?

When we arrived, we were led to the second floor, panting over a long flight of stairs, past a sexy grey room with under-lighting, meant for tables of 3s and 4s, into a tiny bright white room with mirrors, little black sheep sculpture to put handbags, padded tables with white table cloth. This room was used to sit couples and really, really small, smaller than a decent bedroom. 6 square tables were too close together and every whisper reverberated in the room, not the best place for spies and espionage.

Restaurant Andre is so renowned that around us, the customers were mostly tourists. (Yes, we eavesdropped on their conversations with the service staff. It wasn’t difficult in a small room.) To our left, a Taiwanese couple (handsome boy!), to our right, Caucasian tourists, to our back, a lone female Japanese traveller and on another table, a PRC couple. The entire restaurant was packed. The common saying is “if you want good food, go where the locals go,” so seeing so many tourists made us apprehensive.

Even the servers and cooks, racially diverse, seemed to cater to tourist customers: Korean, a Japanese sommelier, Singaporean, Slovakian, and Caucasians. While we thought the service was not bad–the servers knew the dishes well, how to banter, and when to exit, friendly but not encroaching–I wish I could understand them through their accents. Their pronunciation was good but many times, I had to ask them to repeat the ingredients because I couldn’t catch the accent.

Ah the food! Chef Andre Chiang’s training was in France and he has developed what he calls “octaphilosophy,” that is, each of the 8 dishes is represented by a keyword: Unique, Pure, Texture, Memory, Salt, South, Artisan, and Terrior. I think it’s utter and complete balderdash, new-age Zen gibberish. The only chefs who can carry it off are Japanese because of their haikus, Zen Buddhism and way of life; and all other chefs who do it come across as pretentious and airy-fairy. Besides, octaphilosophy simply doesn’t make sense to me. What is the philosophy about? How are the keywords connected? They are just a bunch of random words.

Pure – Sashimi from Japan, Mussels in a Blend of Herbs, Lobster & Palamos Prawn 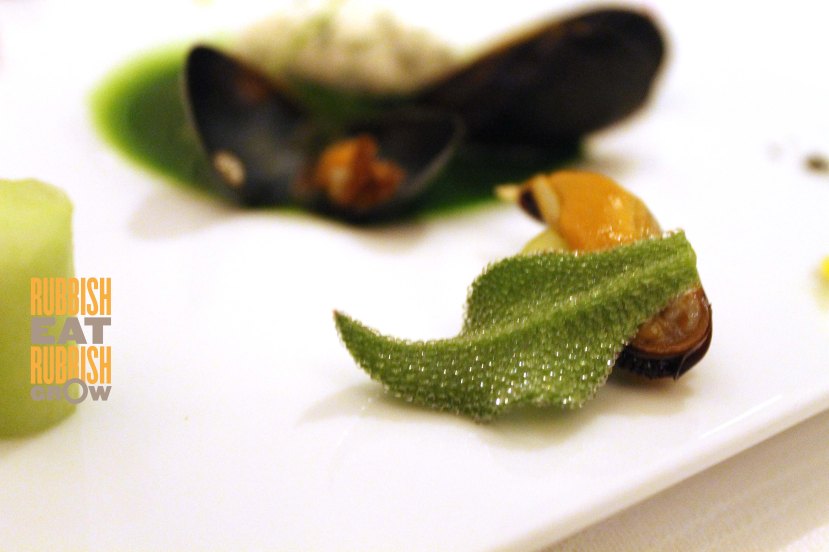 Pure – Crystals on Leaf (I actually ate this before but I forgot where.) 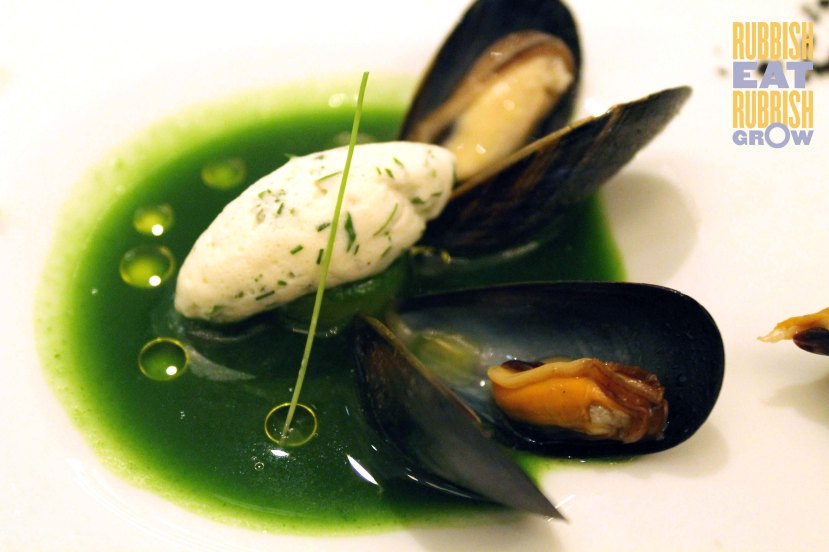 Pure – Look at careful the presentation was, each drop of truffle oil(?) distinct from each other

Regarding octaphilosophy, I didn’t care. I just wanted to know if the food was good or not. And the amuse-bouche kicked off with astonishment: every common item was deconstructed, unrecognizable. The fish-and-chips looked like a Middle-Eastern dessert with wiry strands of kadayıf; and the porcini mushroom was made into a wafer the shape of a mushroom, almost 2-D.

And so set the tone of the food: many things were mashed, blended, mixed, chopped, liquified and pulverized out of recognition. When a server asked how the food was, I told her, “I like it that I don’t recognize what I am eating.” Not only did I not recognize the food, the dishes were also unphotographable because all the ingredients were spread out like an evening spread out against the sky–how do you capture it?

Visually impossible, it was also sometimes impossible to tell what we were eating. The server asked us to taste the “soil” in the amuse-bouche and tell him what we thought it was. We tasted prawn paste, chili and something creamy. He replied, “None of the above.” What you think you know, you do not know. Nothing is certain, nothing is real. Descartes. How can you trust your senses? It was a complete annihilation of senses and knowledge. We had to learn everything from scratch like a person who just walked out of a cave seeing light for the first time when we used to learn about the world from watching shadows. 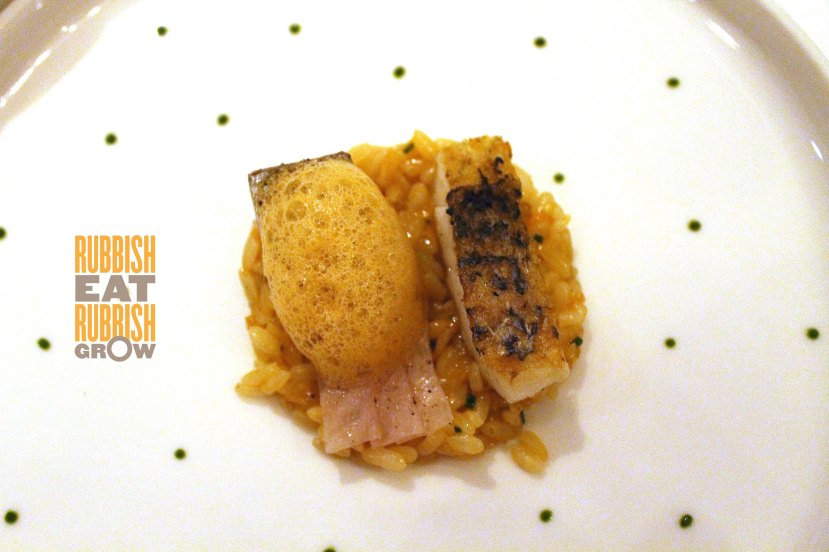 Another Perspective on South

When we calmed down and got over our excitement of our confusion of our senses, we asked, “But is the food delicious?” Isn’t the taste of food always the main point? And honestly, the food was not great, bland even. Most of them were quite forgettable. So when Chiobu came across stronger flavors, she exclaimed, “This was delicious!” She liked the seafood risotto from South and fish (which had meat in between?) from Unique because they were strongly flavored. But I thought the seafood wasn’t fresh in South, and the fish was salty without any layers in Unique. 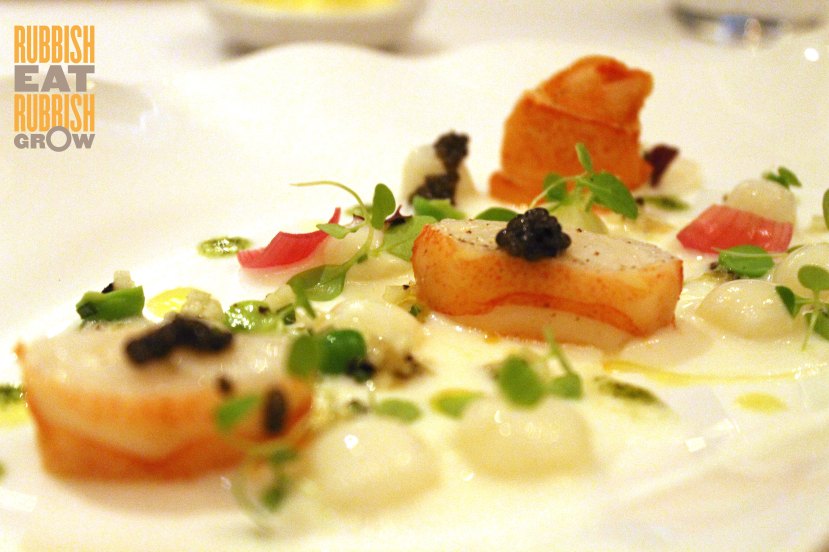 What I really liked was the foie gras dish in Memory. The foie gras resembled a chawanmushi texture, mousse-like, and together with truffles, it was umami². But Chiobu said she was sick of food that didn’t resembled like their selves; she wanted real food, a real big fat solid chuck of foie gras. 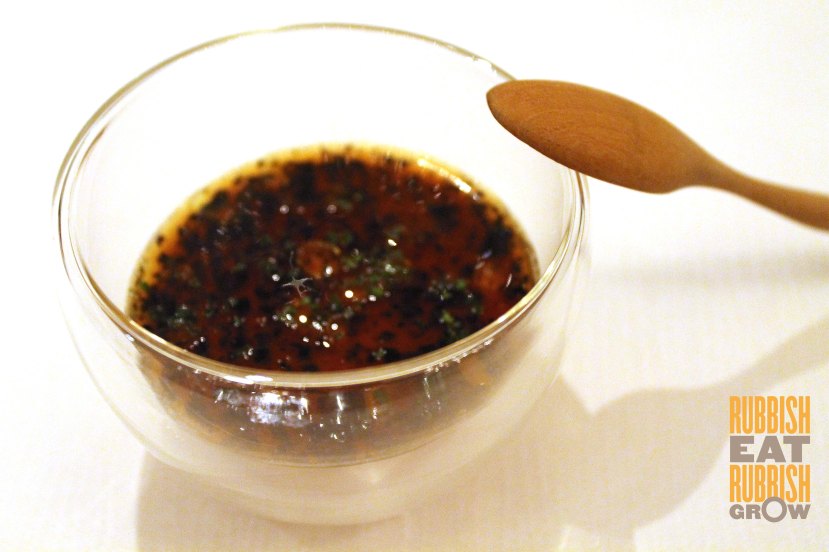 Chiobu had hit the nail on the head with the problem of food that baffles our senses. You can’t keep feeding someone such food because a person would get accustomed to it and would no longer be confounded. That’s why the food came in such minuscule portions, even for Terroir. We expected something wild, unbridled, something excessive and dangerous but all we got was a thumb-sized lamb, cultivated carefully in a farm north of France. Mehhhhhh.

Terroir as big as my thumb. How terrifying.

In the end, WE WANTED REAL FOOD. We didn’t want to be teased. We didn’t want food that masqueraded to be something else. And as if to make up for the food, after the octaphilosophy, after 8 courses, the restaurant fed us with 3 pre-desserts before the main dessert. And after the main dessert, the restaurant gave me us more desserts, including the best madeleine (for petit fours) I have eaten in my life. Shouldn’t that be 13 courses and be named tredecphilosophy? I was befuddled why desserts were not considered part of the philosophy, I mean, some people treat desserts as a religion!

One of the three pre-desserts, honey ice cream with freeze-dried berries

When we left, we took the lift to the ground floor and had to exit via a private room where a group of Japanese was dining. This shocked and embarrassed me. If I had a private function, I wouldn’t want other customers to walk through the room. And as a customer, I wouldn’t want to intrude on the Japanese’s privacy.

Finally, I understand why there are both positive and negative reviews for the restaurant. The positive ones see the uniqueness of the food that doesn’t taste like the ingredients while the negative ones find such uniqueness monotonous, without variation, without surprises after 8 courses.

While writing this review, I come to realize why there were so many tourists in the restaurant and why the restaurant woos tourists by having servers who speak different languages. It is because such food, food that fools our senses, is untenable. Many Singaporeans would eat it once, that’s it, and won’t return. It was a good, even amazing experience for me, but why would I want un-food when there is real wanton mee across the street? So the only way to get a steady stream of customers is to get tourists, who would eat it once. That being said, I strongly encourage people to go to Restaurant Andre. It is once-in-a-lifetime event.

ps: Thank you Chiobu for the treat!