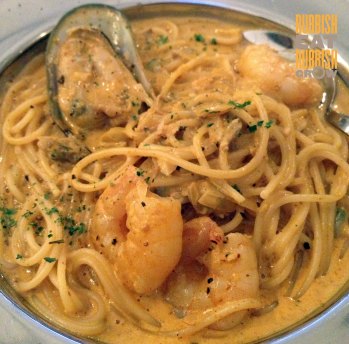 The girlies and I met up for dinner on a Friday night at 49 Seats since we were going KTV nearby later. The place was super understaffed, though it is a small and cosy eatery with only 49 seats. We only saw 2 servers, and only one was in charge of taking orders. Getting his attention was difficult. Food also took very long to be served.

I ordered the popular tomyam seafood pasta which was too salty ($10.90). Huge disappointment since this was their specialty. I also tried the chicken chop ($8.90), which was OK. The girls and I also ordered the cheese fries and it was good cos they were very generous with the cheese, though not WOW.

There’s no service charge/GST. Drinks such as beer, alcohol are cheap. They also have happy hour from 4pm – 9pm. It’s comparable to Café Cartel.