An initial lapse of service had clouded my judgement for this American-Asian fusion small-plates joint right from the start. When I arrived at 8.07pm, my table reserved for 8pm was given away. They had an empty outdoor table but I specifically requested an indoor one to escape from the haze. Why didn’t they call me and ask? While they were very apologetic and very nice about the incident–it was a mistake, they thought my reservation was at 7pm–I was pissed off because (1) it was humid, I was hot (in all sense of the word), wearing two layers of clothes, and hot people are frustrated people and need to sit in air-con areas and (2) I value my life very much and I hate it that people destroy my health. Usually I am a very qing-cai customer. But my health was at stake.

The service continued to be a mixed bag. They didn’t serve water until we requested. It was a very small joint with 4-5 servers (more than enough help) but we couldn’t get their attention at times. Our orders were misplaced and took forever to come. The servers were friendly and very sweet and worked very hard to please, I can tell, but in the end, these people didn’t know the rules of waitering. The restaurant needs to hire a proper manager to whip the service into shape.

If I was cruel, I would say the decor was run-of-the-mill, same as any other tapas places with raw bulbs and cement walls. Ms Atas tripped on a step at the entrance and nearly fell.

But when the food came, we were appeased. Talented chef Emil Halim, who was a designer in New York and had no experience in kitchens, should be proud of himself for the great food. East 8 is named after a street in New York, abundant with Asian eateries. In general, the food here uses a mixture of western and Asian ingredients but after a few dishes, this East-West combo might get a little stale. The ingredients needed to be fresher too.

For instance, the US pork cheek braised in Asian style reduction ($15) had a melt-in-the-mouth texture and a sweet, almost bbq-sauced flavor but there was too much fat and it tasted far too porky. The sweetness seemed almost similar to the popular dish, roasted lamb short ribs glazed with sweet-spicy lime sauce ($22), but the lamb was too tough. Ms Atas didn’t want any of the lamb–“I get angry at food that wastes my calories,” she said–and I had to finish it.

The third dish that tasted similarly sweet, but was also the best dish we had, was the marinated Chilean seabass in miso and wine ($23). The miso and wine had caramelized beautifully on surface of the fish, giving a pleasurable sweetness. And the fish had a nice moist bite. This was quite a perfect dish. I could order ten of it. 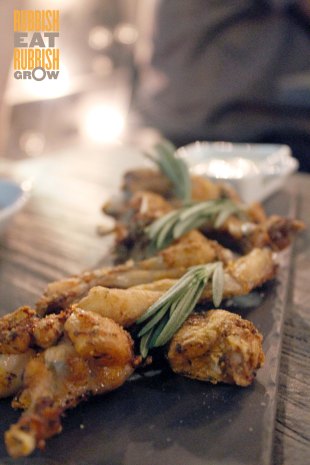 The worst dish we had was the soy yuzu infused torched sliced Argentine tenderloin ($20). While the flavors were appetizing, salty and tangy, the beef itself had a beefy stench.

The comfort food was very comforting. The spiced mid-joint wings tossed in chili, lime and lemongrass ($12) and the plump herbed frog legs with summer tangy mango dip ($18, pictured left) were both deep-fried to perfection, not oily with firm, sweet flesh. If you have to pick one, go for the wings.

The desserts were limited and just ok. Fried banana tempura ($12) was two pieces of fried banana topped with vanilla ice cream–too expensive for goreng pisang. The bitter earl gray ice cream offset the sweetness of the maple bacon cheesecake ($12, pictured below)–quite fun to have bacon in dessert–but the cheesecake was too hard. It seemed like the supporting actor, earl gray ice cream, had usurped the throne from the cheesecake.

The main problem was that the meat needed to be fresher to get rid of their stench. The cooking and flavors were fantastic and I see great potential in this restaurant. The autodidactic chef Halim shares many similar traits with Lolla‘s chef (BBC calls Lolla top 10 restaurants in the world): they are both young, self-taught, inexperienced, never work in a restaurant kitchen before, idealistic and immensely talented. In short, East 8 has great potential but sorely needs experience in the management of kitchen and restaurant. Including a cocktail and a cupuccino, we spent $163 for two (they deducted the cost of lamb ribs away from the bill on their own volition when they asked about the food and we told them the ribs were tough).