After two years of opening, the French chef-owners, Bertrand Raguin and Philippe Nouzillat, who have worked at Michelin-starred establishments and 5-star hotel restaurants across 7 countries, have revamped its menu to include Sunday Brunch (11.30am-2.30pm). The bistrot’s decor is reminiscent of a chic Parisian bistro, plush red booth seats and white-and-black checkered tiles, a perfect place to spend a lazy Sunday afternoon.

A selection of croissants, starting from $2.50, or get a basket of freshly baked baguette with butter and jam ($8).

Fine de Claire No. 3 oysters from Brittany, at $4 each

The brunch is very reasonably priced, starting from $9, and each dish we sampled had a careful, delicate balance that other brunch places lack. The crowd’s favorite was croque Madame ($16, pictured below): baked ham, crispy at the edges, gruyere cheese, Bechamel sauce (a roux of butter and flour cooked in milk) in between two thick slices of toast, topped with a fried egg. Request for a runny yolk so it flows onto the toast, giving it both soggy and brittle textures.

Other crowd-pleasers were the rustic-looking oeuf cocottes, or eggs casseroles. It comes in two flavors, both $12: ratatouille (pictured below) or ham-and-cheese. The casserole is first filled with ratatouille (stewed vegetables) and chorizo and topped with a raw egg, and then baked. To eat it, dip the bread in, give it a good mix, and eat the bread. Both oeuf cocottes were equally good: the ratatouille version had a “green” taste of vegetables–which children may not like but was a favorite with us–while the ham-and-cheese was rich and savory, which children probably like but may get jerlat (surfeit).

The eggs benedict ($14) had a overly thick hollandaise sauce but the taste was spot-on–then again, anything with crispy bacon and eggs can’t taste bad. But if you’re tired of eggs for brunch, try the savory crepes. The Bechamel champignons, jambom & fromage ($12) is a buckwheat crepe topped with ham and mushroom in a mornay sauce (which is basically a Bechamel sauce with grated cheese, and in this case, lots and lots of grated Emmental cheese). What can go wrong with ham, cheese and mushrooms?! 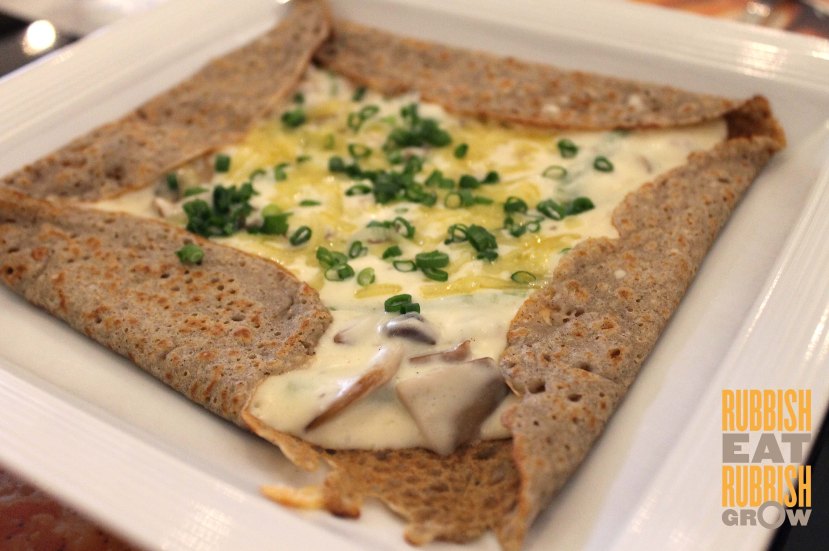 Then there were desserts, the sweet crepes, which were so-so. Between the banana-chocolate crepe ($7) and Crepe Suzette ($12), go for the latter. The former was nondescript, while the latter had less grand marnier than I’d prefer, and I being a teetotaler.

Overall, the brunch food here was fantastic, one of the better brunch places I’ve tried. The price was decent. And the service, managed by Marie-Agnes Labopin, formerly from Michelin-starred restaurants in France, Switzerland and Canada, was stellar. I highly recommend this restaurant for Sunday brunch.

PS: Thanks, David and Patricia, for the tasting.