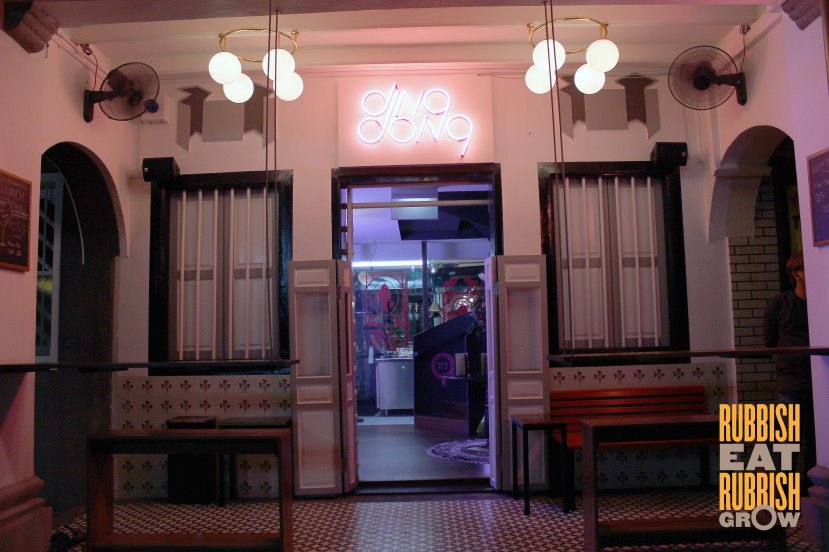 We had high expectations for Ding Dong. Afterall, it was opened by Ryan Cliff of Open Door Policy (ODP) and Tippling Club and we loved ODP. This time, he presented Southeast Asian street food in small plates. 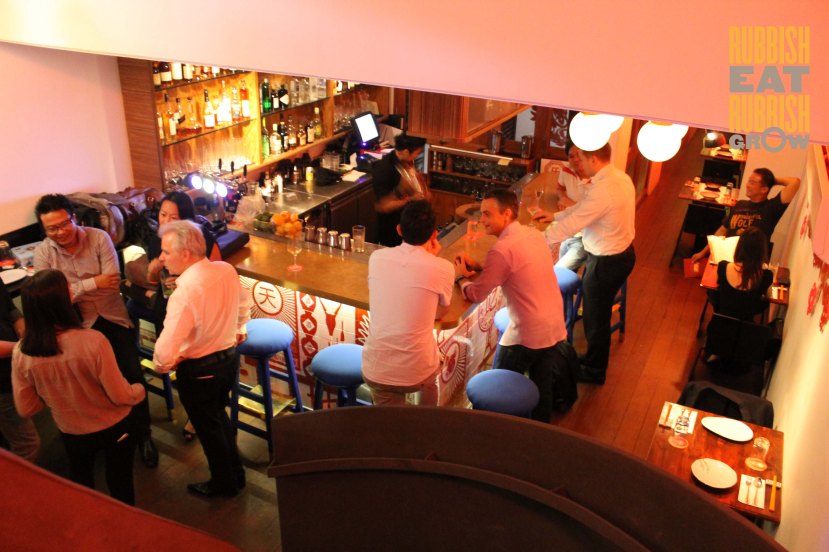 The restaurant has 3 storeys: first floor is the kitchen; second, a bar and seats for couples; and third, for groups. When the excitement over neon lights died down, the decor seemed kitschy and the space too enclosed you’ve to shout to be heard.

If you don’t know what to order, tell the servers “Feed me” ($59+ per pax/ including desserts $71+ per pax). We ordered “feed me including desserts” and two additional dishes. [Prices listed here are a la carte prices.] 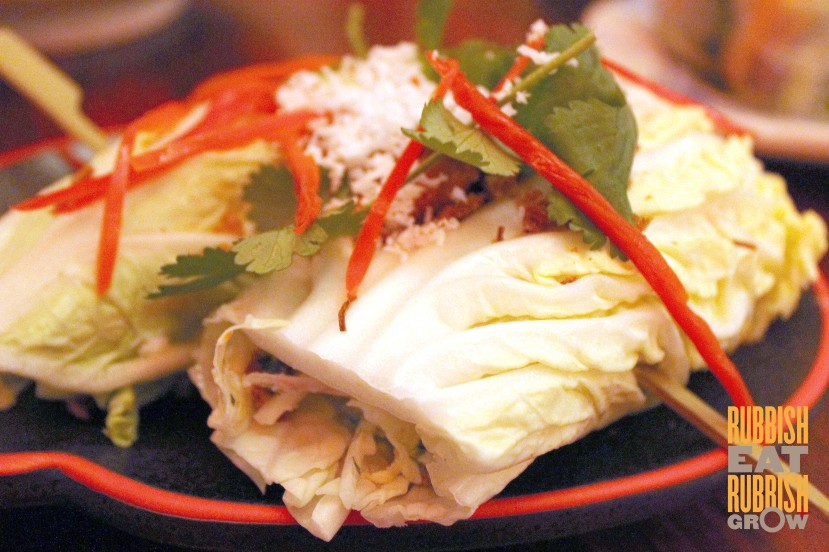 The two additional dishes not on “Feed me” we had were scallop ceviche ($18, above) and wagyu beef rice rolls ($18, below), both of which had interesting concepts but didn’t pan out. Vietnamese cuisine is very heavy on sauces, so while we understood that the bland rice rolls required dip, it was a waste of wagyu beef (which was only the size of a chunky fry). The beef itself was bland too. What was the point of including it? The scallop ceviche came in a Chinese cabbage wrap and was an undifferentiated mass of food that we couldn’t taste the scallop. The coconut overwhelmed the other ingredients. Again, what is the point of adding scallop if you can’t taste it? 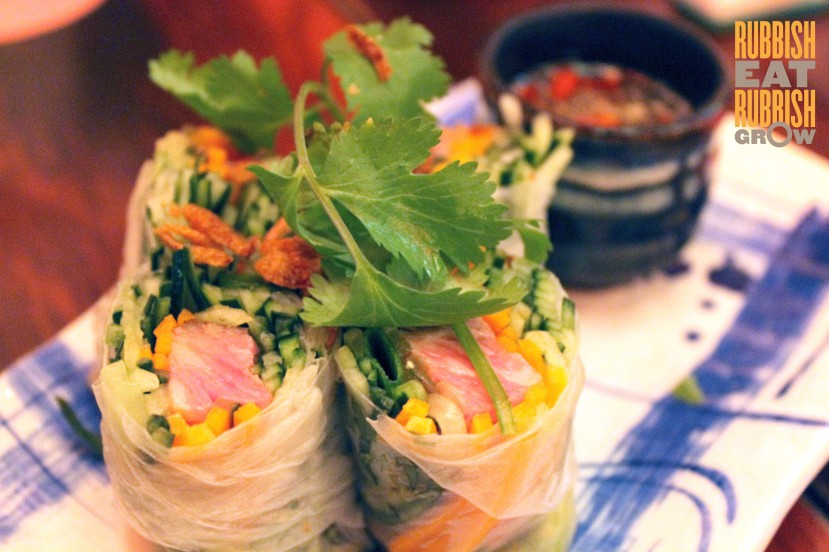 The “Feed Me” menu began with Vietnamese chicken coleslaw ($16), a decent Vietnamese salad with shredded chicken in sweet spicy sauce, but you can find this in any self-respecting Viet restaurant. My gay BFF didn’t like the texture of the filling of pork and crab wontons ($14, below): it wasn’t minced, but was so fine that it was almost mashed. There was an interesting aftertaste of crab lingering in the mouth, which my BFF’s BF didn’t like but I did. 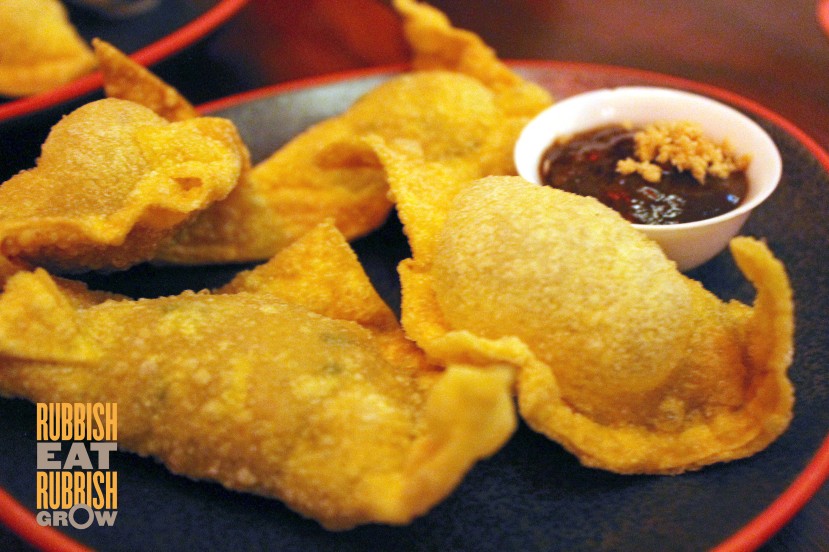 The next trio of dishes to be out were: five spice lamb ribs ($16), best dish of the night, looked desiccated but was extremely tender and delicious, and paired beautifully with the green chili sauce. The garlic-pepper squid ($12, below) was run-of-the-mill calamari that you can find in any bars. The palm-sized black miso kingfish wing ($22) was pan-fried and tasted slightly like salmon. It was delicious but nothing extraordinary. 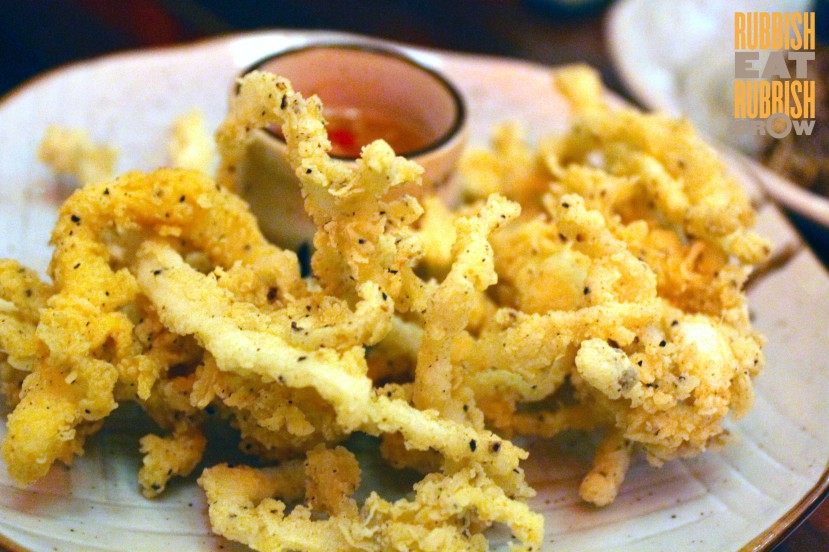 The last dish, Tom Kha crispy quail ($23), with rice, had a very interesting green curry gravy. It was gooey, rather than viscous. But the batter for the deep-fried quail was “flour-y” and the quail itself was bland.

At this time, while waiting for the desserts, my BFF mentioned, “Wah, the meal comes up to more than $100 per person.” And I went siao ding dong, HULK SMASH ding dong. From my track record, I am willing to spend on food. $100 can get me far more delicious and better quality food. The food here was ordinary street food, sold at fine-dining prices–and to rub salt on the wound, the food wasn’t particularly good and the decor wasn’t elegant. You look around, and this place is for expats who don’t know Southeast Asian food very well but have money to burn at a “hip” joint. There wasn’t any heart in the food! The food was either fried or raw. What got me really mad was restaurants like these thinking they could get away with mediocre food at a high price while other good restaurants struggled and I had to spend my hard earned money on lousy food. I’d rather donate to charity or spend the money on a little known but good restaurant and write a good review for it. I was mad also because I hate writing bad reviews because the restaurants would hate me and people would think I’m mean. 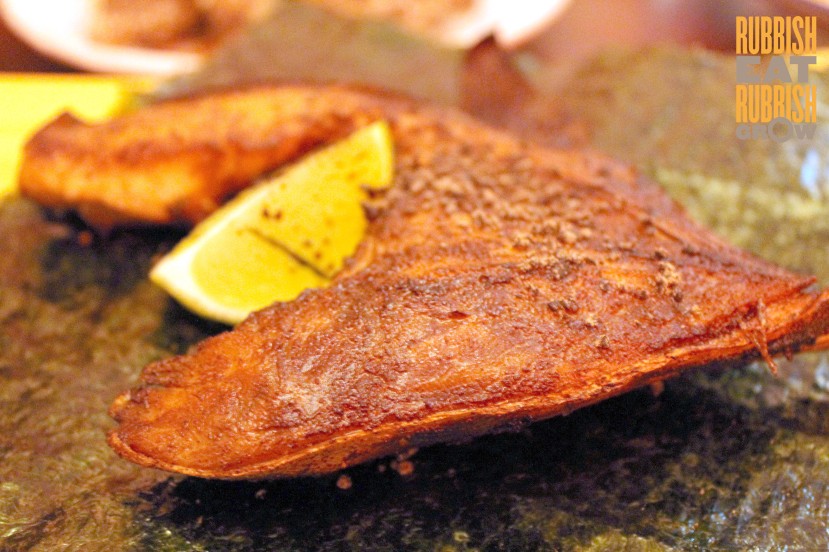 When I added up the dishes we ate, it only amounted to $43 per pax, but “Feed Me (without desserts)” menu charged us $59 each. We were robbed. That’s like adding salt to wound, and then re-stab the wound a few more times then twist the dagger around the wound.

And because we ordered for “feed me (with desserts),” we waited and waited for the desserts. It didn’t come for a long time, so when I asked the server, he told us the order chit put us down as “feed me without desserts.” This was the first time I was glad for the lapse in service. This was also the first time that I forwent desserts at a restaurant. We decided to cut our losses and run. And in the end, including two drinks, we paid $366 for four or $91 for one for a meal that should cost at most $55 per pax including desserts. @!$#T$@4@EQW. I’ll never, never, never enter Ding Dong again. At the end of dinner, I felt so ashamed that I recommended this place to my friends I had to apologize to them.