My BFF, Paul, who is a great home chef, wrote this review.

One of Asia’s Best 50 Restaurants, Waku Ghin is the gastro-child of Tetsuya Wakuda who is famous for the eponymous Tetsuya in Sydney. Serving Modern Japanese cuisine, it’s a restaurant recognized (and lauded) by many in the local food scene and it certainly has no lack of sterling accolades and reviews. In fact, it was on reading its stellar reviews and rating (85%!) on Hungrygowhere and various other food blogs that made me think, yeah let’s do this for the BF’s birthday. And so on 19 April, we went.

Unfortunately, Waku Ghin didn’t quite live up to its hype. Throughout the dinner, I couldn’t help but think, in the words of Mrs Bedi from Goodness Gracious Me, ‘I can make it at home for nothing!’

So they began by introducing the ingredients. At which point, I asked for the drinks list, flipped to the page with the most expensive stuff (a whopping SGD65,000!), gawked at it, exclaimed to the BF, ‘AIYOH!’ and then went on to order the more inexpensive alcohols.

The first course was freshly shucked oysters served with ginger and rice vinegar. It was super succulent and tasty although slightly overpowering in tartness. The BF loved it. I thought it was nice. A little salt would’ve made it even lovelier.

The second course we had was the signature dish which was a decadent combination of marinated botan ebi, uni and oscietra caviar. If your palate is familiar with all of these ingredients, you’ll know that this, obviously, tastes absolutely divine – rich, creamy and exploding with umami. However, my problem with such dishes is that it requires so little culinary skill. How can expensive and fresh ingredients thrown together like this not taste awesome? It’s a copout.

Next, we had the John Dory with charcoal grilled eggplant. I quote the BF, ‘This is the cze char taste.’ To which I said, ‘You mean the char on the eggplant right? Like wok hei?’ No, no. Like ma you ji (sesame chicken). That is all.

And again, one of those low-level type cooking that placed its culinary faith on the freshness and expensiveness of the ingredients. Trofie pasta with Tasmanian abalone and cherry tomatoes. If you’ve had gan bao that’s been cooking intermittently for hours over many days, you’d know that no other way of cooking abalone can have a better flavor and texture. So I suppose what was impressive about this was that it had abalone – something you won’t have at Pasta Mania. And it tasted exactly like what it should – pasta and cherry tomatoes. The tartness of the tomatoes kinda overwhelmed the abalone so I couldn’t really taste it. Also, the pasta was a little too al dente and the abalone tough-ish. (Raw abalone has the texture of hard cartilage.) Oh yes, we were also informed that the pasta was special – from Italy. Yeap. 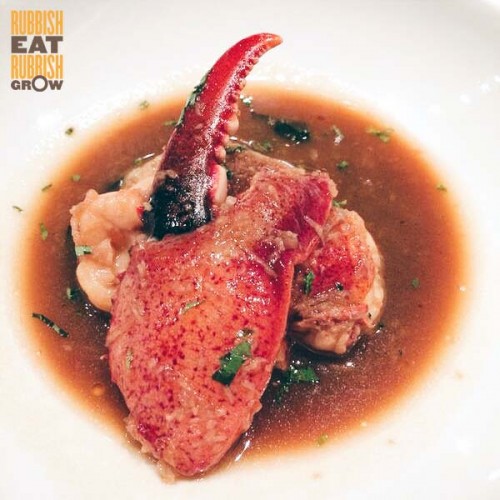 Lobster. Perfectly cooked – springy and sweet. Lovely tarragon-infused broth that was not too heavy. Nothing particularly special. The BF had grilled tilefish with maitake (below) only because they misunderstood and thought he had an allergy to any kind of shellfish. He’s allergic to raw shellfish. Anyway, simple, light flavours, very easy on the palate. And what’s interesting about this (prolly the only interesting thing in this night’s meal) is that they puffed up the skin and made it crisp, so when you eat the fish (with its skin) and the maitake, you get a really good mixture of textures -soft fish meat, crispy skin and a nice bite from the mushroom. 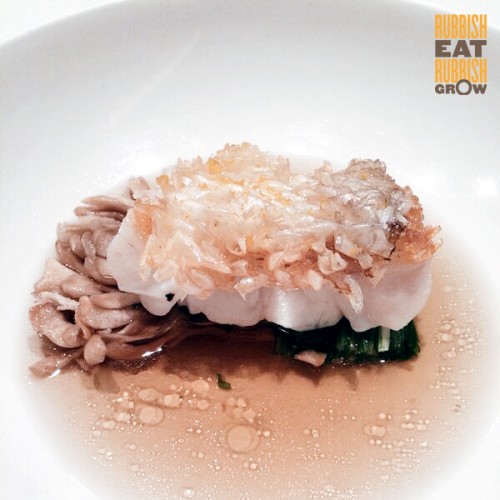 Tasmanian grass-fed beef with Tetsuya’s wasabi mustard. Seared on the spot for you. Again, perfectly cooked medium rare. Really tender. Great combination with the wasabi mustard which wasn’t overwhelming at all. But nothing particularly special.

Wagyu beef. Seared on the spot too. Rich, melty and just lovely to eat. With garlic chips, which were crispy and flavourful. But again, nothing particularly special. It’s something I sometimes do on the weekends at home. And it’s cheaper that way. By this time, I kinda was just waiting for dinner to be over.

We had a gyukuro to cleanse our palate. The tea leaves were brewed at the right temperature (between 50-60C) which meant there was no bitterness – only a full, uplifting taste – like the liquid essence of sweet green vegetables. 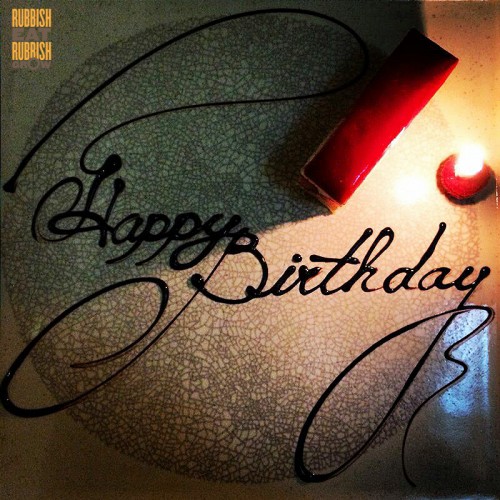 After dinner, we were brought to the dining hall where desserts were served. The chartreuse jelly with lychee sorbet topped with pomelo was light, sweet and refreshing. Nothing mind-blowing. What was really nice was the house specialty – Ghin Cheese Cake. This little thing was pretty to look at and delicious to eat – soft and creamy and leaves you craving for more. And we had the birthday cake which I suppose was pretty delicious too.

The pleasant thing about this restaurant is that they pay attention to your needs. Doors were opened for us when we arrived; my seat was pushed in for me when they realized I had difficulty getting it in myself; we arrived late and yet they managed to pace us such that we were eventually having the same courses as the other guests without feeling like we were rushed (6 people share a communal dining counter); they find out about your allergies and prepare dishes outside of the night’s degustation just for you.

Overall, it was nice. Generally well-cooked, well-seasoned but for that amount of money I’d rather fork it out on choosing the best and freshest ingredients from a seafood market and take them home and cook them myself. Or go to another fine-dining establishment.

Perhaps this comes from a personal bias. In this day when everyone’s sort of pseudo-chef with great pretensions to (home) cookery (I’m one of those pretentious many who watches a lot of cooking shows and I cook), so when I go to a fine-dining restaurant, I expect to be bowled over not just by the ingredients. There must be some greater finesse and artistry in the plating. There must be some interesting way of cooking and manipulating the ingredients that makes me curious to try and see if I can replicate it at home without a commercial kitchen, that makes me want to learn more about the techniques involved.

There are many raving reviews out there and unfortunately, or not, this isn’t one of them. Perhaps this review isn’t very fair and maybe I’m cheap but nope, I’m not gonna pay 400(+++) dollars again for stuff I can make at home for nothing.