If I’ve known how similar Bird Bird is to Ding Dong in the first place, I’d never have gone partly because I don’t like derivatives, and partly because I don’t want to pay so much for Asian food when it is available everywhere readily in Singapore at a cheaper, much cheaper price. Even though Bird Bird is still overpriced—we paid $238 for 5 persons, or $47 per pax—it is half price of what I paid for Ding Dong. 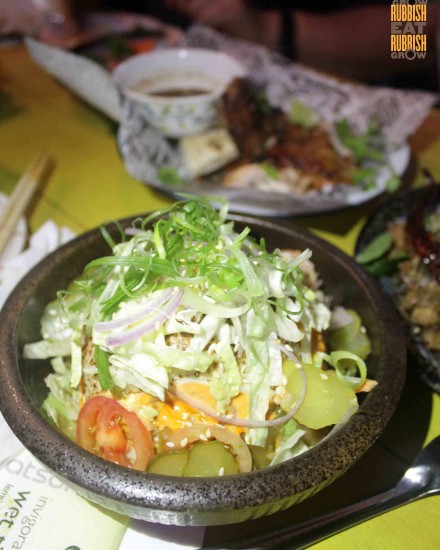 One misconception of Thai food is that it’s spicy and sour, and I think that’s the main problem with Bird Bird. Many items repeat the same two flavors. Big Mac fried rice ($24, above) is the most interesting dish on the menu, tasting exactly like Big Mac, but it errs on being too spicy. The umami corn ($14, 2 ears, below), slathered with sriracha kewpie, is so spicy lips tingle; it’s too salty. 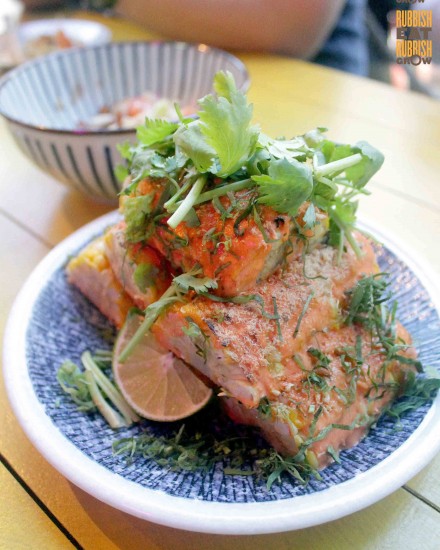 Som tum ($14 + $2 salted egg, above), the classic green papaya salad, is too salty too, way too sour, and not crunchy enough; most Thai restaurants do this better. Though not epic, I like the epic omelette ($24, below) but as Mr Fitness puts it accurately, this is just fried oyster omelette you can get at hawker stalls for 1/5 of the price. Like som tum, you can get a better version of this at hawker centers.

They should remove basil duck tater tots ($22, above) from the menu; the tater tots have a rancid oil stench, and I can’t believe they charge so much for tater tots.

Bird Bird does birds best. The BFC ($24, 8 pieces, above) or Bangkok Fried Chicken has a very nice cilantro? coriander? marinade that I like a lot. But most people around the table prefer the gai yang ($26, half chicken, below), roasted chicken that is aromatic. Is it lemongrass we smell? Another crowd’s favorite is waterfall lamb ($28), which seems to be more of a middle-eastern lamb kebab.

Achilles heel is the desserts. Who ever thought of adding chicken skin to sundae ($8)? They just don’t go; chicken skin is not the new candied bacon. Saw many people instagram and rave about the neh neh pop ($7/$8), which is like Magnum ice cream but with different flavors. Tried 2 flavors, coconut and mango sticky rice—didn’t like either. Ice cream too dense, more like cream than ice cream. 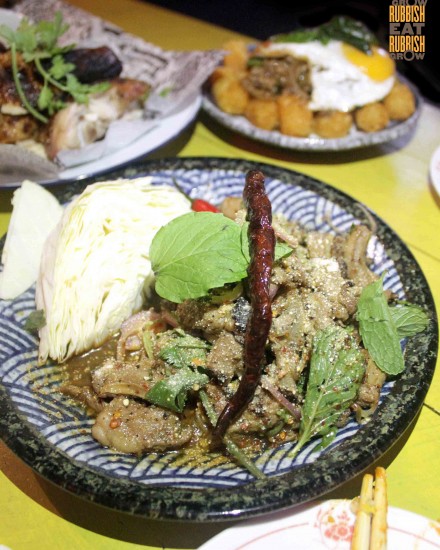 The best thing here is the service. Had a great time bantering with the tomboy server. I felt like we were friends in our past lives.

For the reasons that Bird Bird is half price of Ding Dong, that the service is better, and the food is more thoughtful, given a choice to dine at Ding Dong or Bird Bird, I’d pick the latter.