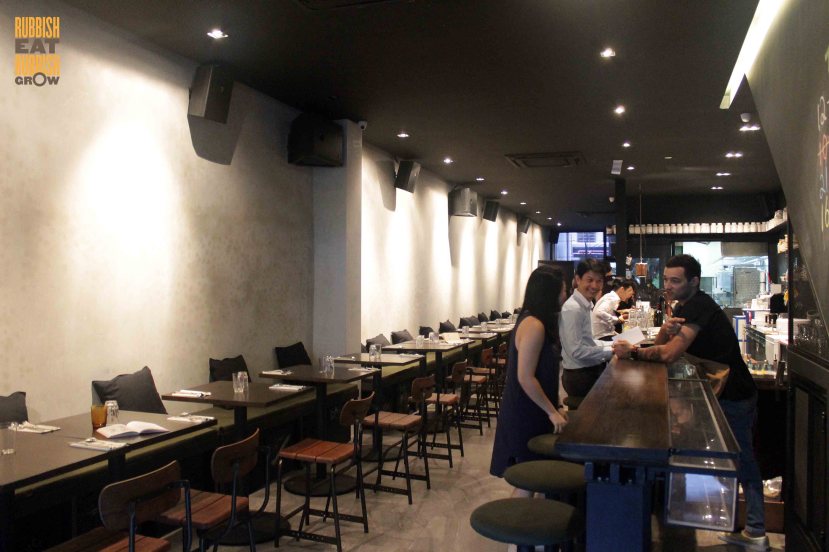 If there is a TV character to represent what Pyxiemoss at Clarke Quay stands for, it’s Phoebe Buffay from FRIENDS. The name Pyxiemoss recalls how Phoebe is new age-ish, avant garde, airy fairy; and furthermore, moss is hardy, and pyxie moss is the only flowering moss, bringing beauty to hardiness. Hardy and gentle, that’s Phoebe.

I’m going to extend my metaphor to the decor. Even the decor is a little Pheebs-ish. At the entrance, there is a hugeass Harley motorbike for leather dudes. At the back, there is the sweetest bicycle with wicker basket. The restaurant plays 80s rock music, like Def Leppard, in a chic, classy, modern setting of industrial cement walls and floor. The entire set-up is slightly schizophrenic like Pheebs who can date leather biker dudes with tattoos, and still maintain her ethereal innocence. 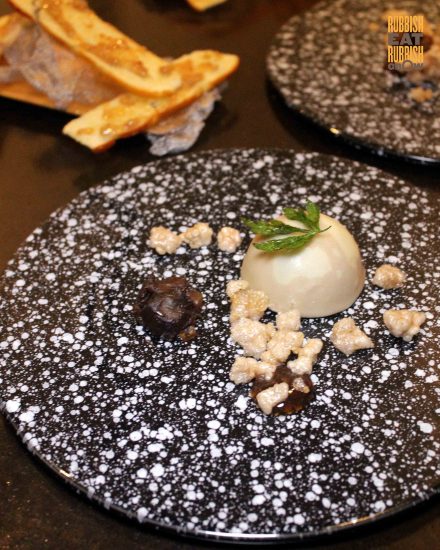 The reason I brought up Phoebe is because The Tribbiani ($15, above) is named after Joey Tribbiani in FRIENDS. Joey and Chandler have a duck and a chick for pets. Like Brangelina, a combination of two words, Joey and Chandler wonder if they should call their pets collectively as “chick (chick + duck)” or “dick (duck + chick).” That’s smart wordplay.

Anyway, the dish, our favorite of all that we tried, has both chick and duck, hence The Tribbiani. The duck liver mousse is dipped in liquid nitrogen to give it its crust, and the mousse is to be spread on a thin crispy housemade focaccia wafer already topped with schmaltz (rendered chicken fat). There are bits of fried duck heart to give texture. Its rich iron taste of liver is cut through by a sweet Pedro Ximenez (dark sherry) soaked Medjool date jam. 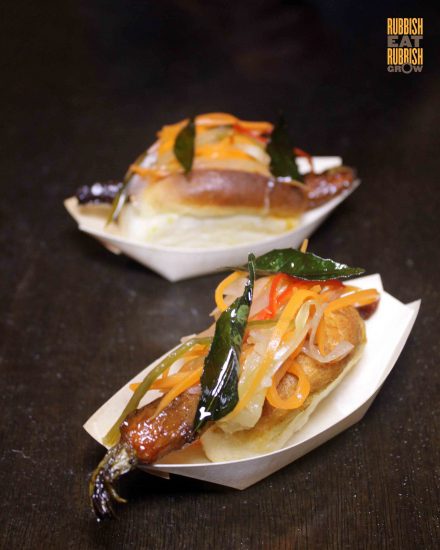 More Pheebs comparisons. She’s vegetarian, and so are many offerings at Pyxiemoss. Like happy-go-lucky Phoebe, Chef Tim Ross-Watson created the vegetarian dishes incidentally, not intentionally. The carrot dog ($5/piece, above) is a bite-sized “hotdog.” The “sausage” is a chargrilled carrot glazed with gula melaka, which is then wedged in a housemade bun with curry ketchup, topped with sourish achar. Another of our favorite dish. My only complaint is that it is too small! Why bite size? Make it XXXL!

The Seaviche ($8, above), another vegetarian dish, puns on the seafood ceviche, but the seafood is substituted with sea coconut. Rosemary-smoked corn chips are provided to scoop the ingredients.

The third vegetarian dish that we liked quite a bit, Not Just the Tip ($14), uses the entire celery from root to leaves, cooked in 6 different ways. For example, the root is cooked in minimal heat for 6 weeks! This dish is a reinterpretation of the Waldorf salad, with green apple, candied walnut, stilton cheese, and barley risotto as a base. It’s complex and delicious as the ingredients come together, producing different flavors with each bite.

Moving on to meat dishes. Coffee Lox ($18, above) consists of Norwegian salmon cured in-house using upcycled coffee grinds, so if you take a sip of cold water before eating the salmon, you can taste the very subtle underlying flavor of coffee. Piquant and refreshing with green apple. 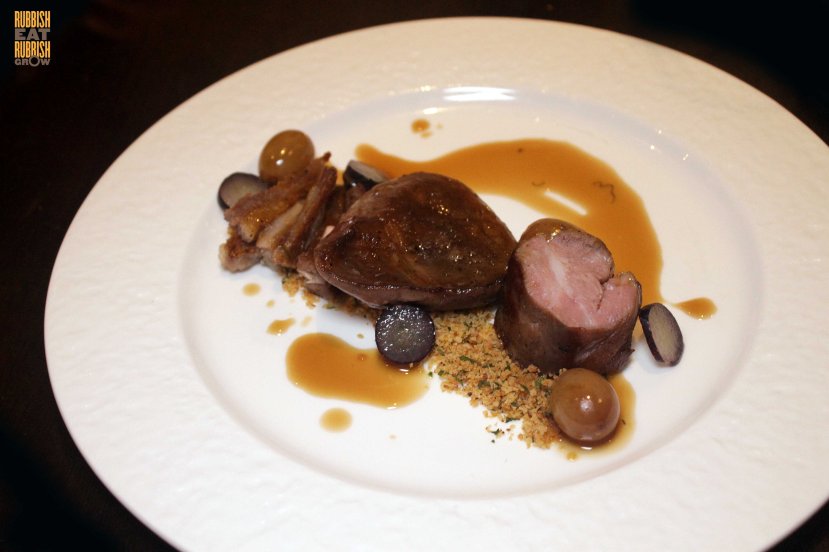 Ross-Watson has a no-waste policy so the Mother’s Lamb ($18), named after his mother who cooks lamb on festive occasions, uses lamb from nose to tail. The neck provides the meat; the heart gives its pleasant chewiness; and the belly is basically like bacon, for shiokness. It is paired with cold carbonated grapes, which is shockingly refreshing as a contrast.

The food at Pyxiemoss feels like something Phoebe would concoct. Obviously, there are skilled modern cooking techniques involved that are beyond Phoebe who, by the way, is a food caterer for a while. But the style of food has a child-like exploratory, experimental, quirky, playful, silly, fun quality, a joie-de-vivre, that Phoebe possesses. It’s just like her to throw in a gazillion ingredients because she is inclusive and doesn’t want to hurt the feelings of other ingredients; but amazingly with so many ingredients, the food still manages to come together as a whole. There is a high level of culinary artistry at Pyxiemoss, not seen in other restaurants. Like Phoebe, the food doesn’t go by normal rules and as a result, it is original and likeable.

If one negative thing must be said about the restaurant, it’s the lack of direction: The fine-dining-like food, using modernist cooking methods but not using top ingredients, served in small plates at a chic industrial setting, with rock music, hardcore Harley motorbike and sweet picnic bicycle, give rise to incongruity. What is the restaurant trying to be?

I know. The restaurant is pulling a Phoebe. Pyxiemoss is like Phoebe who contains contradictions, who is the most quixotic and wisest character on FRIENDS. The uniqueness of Pyxiemoss is that it can house all these contradictory elements and make them work, because they are subsumed under the personality of Chef Ross-Watson who likes 80s rock music, Harley bikes, and modernist cooking.

Needless to say, Pyxiemoss is one of my favorite new restaurants. It shows character, and it is fun. And now you know what to feed the smelly cat.