Former Perfect 10 radio DJ Darren Wee, who brought us Babette, Chillax (moved to SMU), and Ninja Bowl, has opened a new outfit, Ninja Cut at Seah Street, taking over Sela Restaurant. I’ve ordered delivery from Ninja Bowl, but did not physically visit the shop. According to my friend who has been to the shop, the decor of Ninja Cut is similar to Ninja Bowl, clean-cut lines of modern minimalism, down to the epergne of pink lilies. “I’ve taken a photo with the lilies at Ninja Bowl,” he said. Even the menus share many similarities.Don’t reinvent the wheel, right? Why change a thing when it works?

What is different is that the menu at Ninja Cut is a pumped up version of Ninja Bowl, with more meats for options. At Ninja Cut, there are two columns for mains on the limited menu: one column similar to Ninja Bowl, the other column for brunch. (For those who are not familiar with the bowl concept, it’s basically an assembly of ingredients with a carb of your choice, not unlike cai fan or salad. Cai fan is basically Chinese salad, right?) 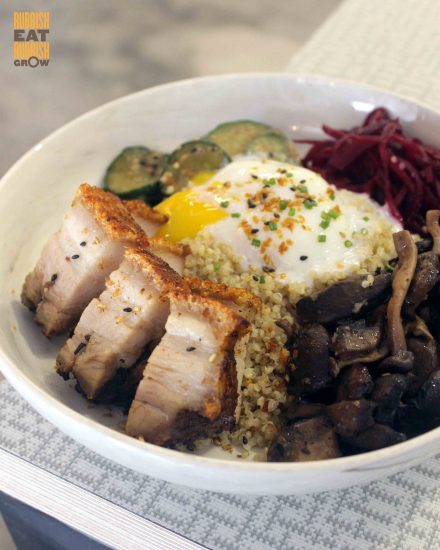 From the bowl menu, we had two dishes. The tuna-na-na-na ($16 + $2 soba), consisting of tuna tataki, onsen egg, tomatoes, miso cucumbers, aburi avocado, and furikake, is something from Ninja Bowl, and something which I had ordered for delivery. It is SO much better at the store. When delivered, the portions are small, and the ingredients turn soggy.

#crispygoals ($14 + $3 quinoa), with miso cucumber, pickled beets, onsen egg, and mushrooms, focuses on the crackling pork belly known as sio bak. The sio bak is not too bad; although tough, they are liberal enough with the salt and pepper to bring out the fat flavor. Salt makes tastebuds receptive to fat, which is where flavor comes from. 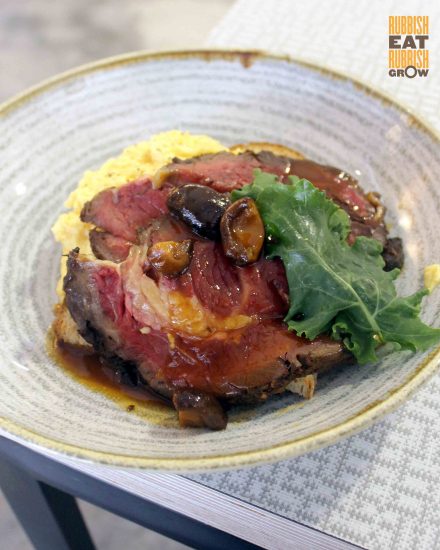 From the brunch section, we also had two dishes. I try not to order steaks in restaurants because I can easily cook it at home and restaurants jack up prices for steaks but Ninja’s Steak and Eggs ($20) is actually quite a good deal. The slow-roasted ribeye–quite a good size, about 200-250g?–comes with scrambled eggs on toast. The gravy has a palatable sweetness which binds the entire dish together.

The only dish I didn’t like is the oft instagrammed marvellous matcha ($16). It’s a matcha hotcake, still molten inside, with homemade dango (those riceball thingy), yuzu peel, ricotta cheese, and azuki beans. I didn’t like it because it’s an undifferentiated mess of sugar. It’s overwhelmingly sweet without any subtlety.

Talking about dislikes, I didn’t like the sour coffee too, way too sour.

There are also two things in general to improve: many ingredients on the menu repeat themselves, so there is not much of a variety. For example, the 24-hour braised Japanese curry beef cheek in The Hot Cheek ($14) under the Bowl section reappears in the Brunch section as The Cheeky Cheese ($18). The ribeye appears in both What’s Your Beef ($18) and Steak and Eggs ($20).

The second thing to be improved: The pricing. We spent $95 for three persons. That’s expensive for a cafe, no? I thought the average spending at a cafe should be around $25/pax.