Song Fa Bak Kut, whose flagship store is at New Bridge Road at Clarke Quay, began as a pushcart in 1969. It has now expanded to 7 outlets, including The Centerpoint at Orchard Road. The outlets are decorated in the style of 1950s/1960s, a smart marketing ploy. Recently, it has received Michelin Guide Bib Gourmand.

In the early days, bak ku teh is known as a “man’s breakfast” because coolies ate it for breakfast. Most bak ku teh stalls then were situated along Hokkien Street although Song Fa was at Johor Road. Although both the Hokkien and Teochew styles use herbs, the Hokkien style comes across more herbal and is darker in color (because of soy sauce), when compared to the Teochew, which is spicier with garlic and pepper. So now there are two styles: the herbal and the spicy. And Song Fa belongs to the Teochew spicy strand. 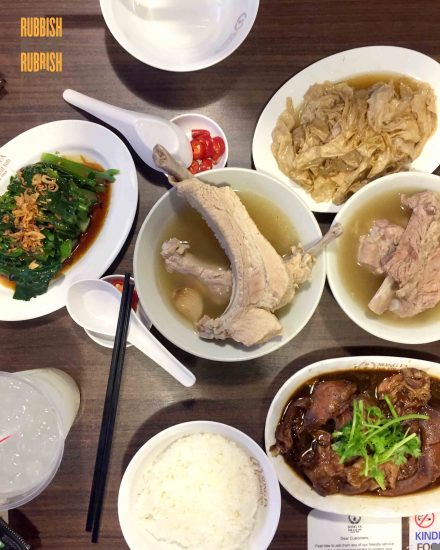 I’ve eaten at Song Fa before, but I had no recollection of the taste, hence this revisit. There are now two outlets along New Bridge Road, but the corner shop, which we went, is the original one, although with 7 outlets, you can’t really talk about “original” anymore; they are all original since they have a central kitchen to distribute the food to the outlets. So there should be no difference where you eat.

We took a long time to eat because we ordered so much for two persons. The waiter even joked when he saw our table, brimming with food, “Wah, waiting for your family to come?” Hahahahaha. 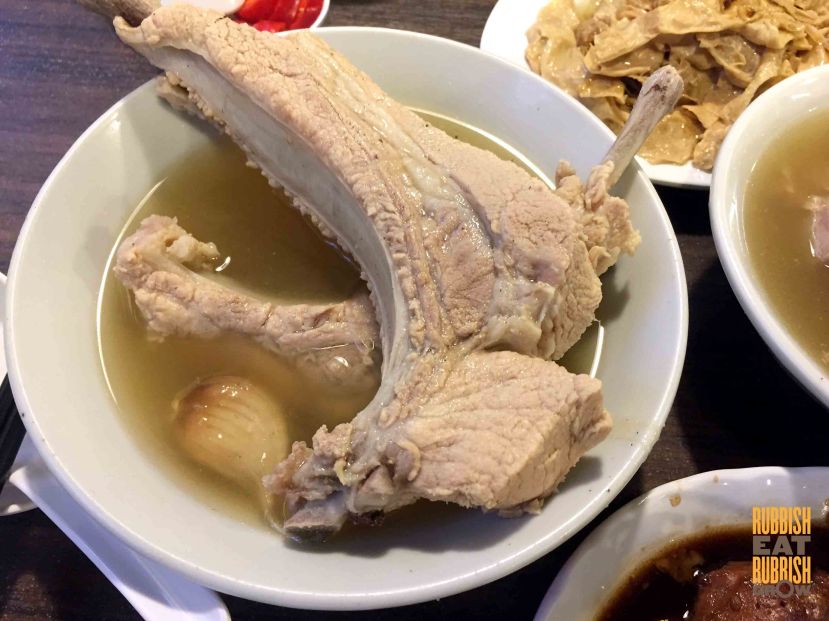 The pork in the bak ku teh at Song Fa is a little dry. It is not the fall-off-the-bone tenderness but I suppose it’s tender enough. A good pork rib should not have shreds of meat stuck in between teeth—my mother’s bak ku teh is cleanly in my stomach–but Song Fa’s ribs could be found between my teeth. My dental floss had some work to do that night.

The only difference between the pork rib soup ($7) and premium pork rib ($11.50) is the pork used. Although the amount of meat is similar, the premium one is much better in quality, and it doesn’t have the irritating chewy cartilage that the normal pork soup has. If you can, go for the premium.

As for the broth, it is ok.

To be honest, my mother can make a very good bowl of bak ku teh (pictured above), and my mother’s broth is better, stronger, more potent. Her ribs are also tenderer and the meat does not get stuck in between my teeth. Coincidentally, that same night I went to Song Fa, I returned home to my mother’s bak ku teh and could do a rather unbiased comparison. While Song Fa is passable, it is by comparison not great. 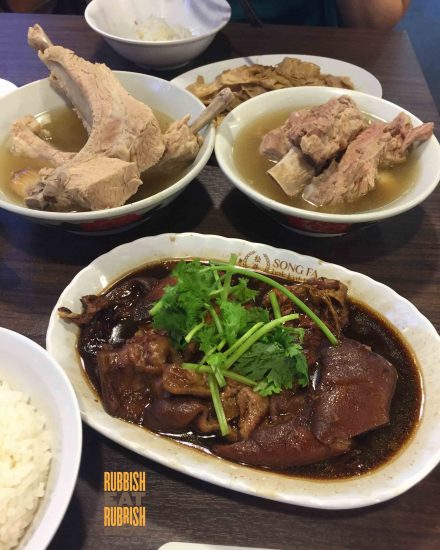 I would recommend the braised pig trottles ($7). It’s soft and tender, without being oily or jerlat. Again, the sauce, like the bak ku teh broth, is a tad light, but it’s still acceptable.

While it is befuddling how Song Fa could be awarded a Bib Gourmand, it is not terrible; the food here is acceptable although the best thing is the value. Including braised beancurd skin ($3.50), kai lan ($4), rice ($0.90), and 2 drinks, we spent $40 for two persons, but we ate enough for 4. I wouldn’t queue for more than 15 minutes for it. The selling point here is the affordability.