Butcher Boy, Keong Saik: Asian-Inspired Grill Restaurant by Cure Is Up to Par

Cure, the best restaurant in 2015, has quietly opened a sister restaurant, Butcher Boy, a few doors down along Keong Saik Road. Andrew Walsh, formerly from Esquina, protege of Michelin-starred chef Jason Atherton, helms the kitchen at Cure, and I surmise, at Butcher Boy. This new restaurant serves Asian-inspired grilled dishes. We were there on a Sunday, and on Sundays, they serve roast. Very British.

There was a grilled hamachi collar as a special, but we went for the hamachi sashimi ($22) for starters. I suppose they use the same fish for both grill and sashimi. Deliveries usually happen on Tuesdays and Fridays, and since we were there on a Sunday, the hamachi has already a slight fishiness. But it sits on a molehill of Tokyo turnip, not at all sharp or pungent, but it does counter the fishiness and adds texture. Quite pleasant. 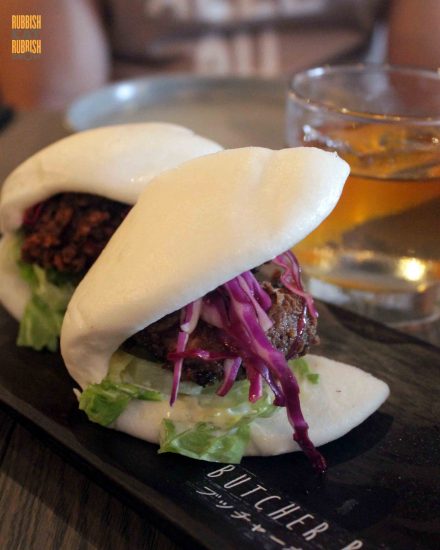 The fried chicken ($10 for 2 baos) is a round, fat chunk; tender inside and crispy outside. It comes with kewpie mayo and dried chilli to give it a wickedness. The fluffiness of the baos contrasts wonderfully with the crispiness of the chicken. 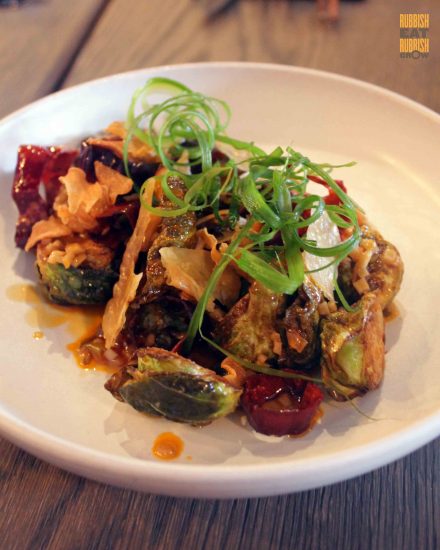 Regretted ordering the Brussels sprouts only because the Sichuan flavor here is rather similar to the bao previously mentioned. When Brussels are improperly cooked, they are bitter. But here, there is no bitterness and the vegetable goes well with the Sichuan mala sauce. To add texture, there are some fish skin crisps.

And finally, the Sunday roast beef ($36)! There are so many things to love about it. The dehydrated kailan is crunchy and addictive. The Yorkshire pudding is a covering for a sac of air. The baked potatoes are lovely and crispy.There is a sweet gratin (pumpkin, maybe?).

However, the beef is way too tender that you can tell it’s sous vide thoroughly; you don’t need a knife, you can just bite it off easily, almost like fish. I really prefer some texture to beef, and now it doesn’t taste like beef at all. The black pepper sauce is too salty and overpowering. I’m nitpicking here. The beef is nice, but I thought it can be better with less. Less sous vide, less salt. 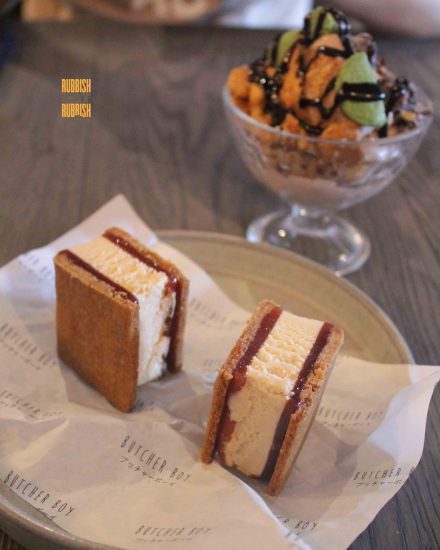 We ordered two desserts, peanut butter ice cream & plum jelly sandwich and chocolate textures with matcha and salted crackers. (I think they are about $14-$16 each.) And their desserts are their weakest course. Both desserts are very similar; they are both sticky without much variation.

Like the food at Cure, the food here plays on textures and contrasts. But somehow, Cure is better perhaps because Butcher Boy is more casual than fine-dining; there is an attention to detail in Cure that is missing here. I think it’s best to think of Cure as a date restaurant and Butcher Boy as an after-work restaurant.

I have heard negative things said about Butcher Boy but I quite like the restaurant and would return to it. Even though there are minor flaws in the food here and there, they are still better than most restaurants’ and I like everything I ate (except for desserts).

I misplaced my receipt but we paid about $155 for two persons.