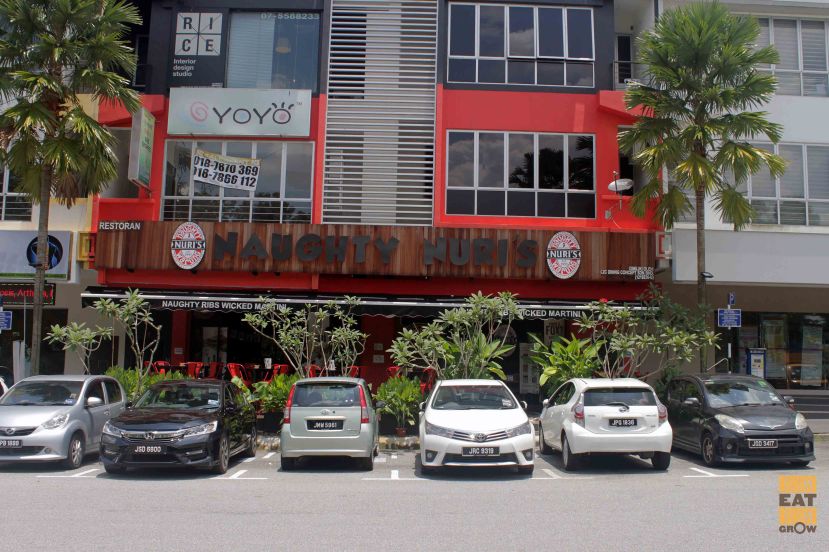 Naughty Nuri’s originated from Seminyak in Bali and now has two restaurants at Johor Bahru. We visited the Sutera Utama outlet, which is a 5-minute walk from Wu Fu Cheng 五福城 also known as Sutera Mall. By the way, this area, Sutera Utama, has many food options. 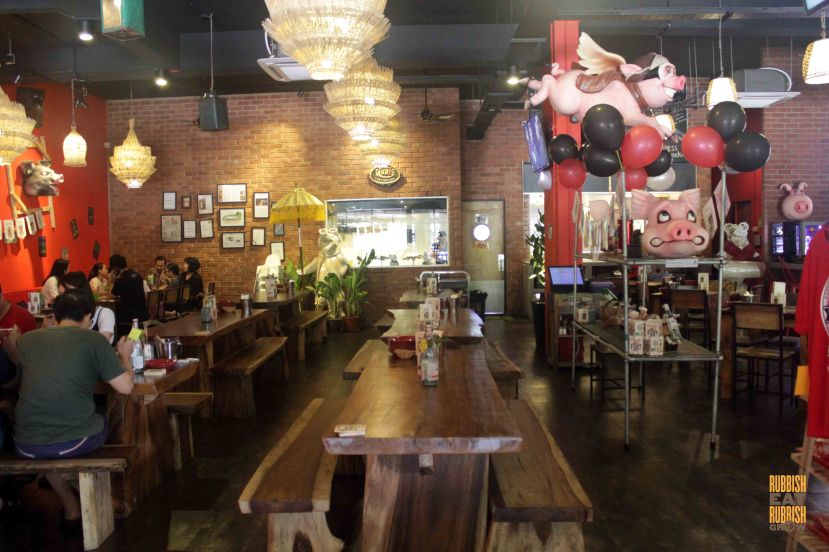 Naughty Nuri’s is, of course, famed for their ribs, but few people know that it is also a bar known for their martinis. Anthony Bourdain calls them the “best martinis in the world.” Besides martinis, they also serve assam mojito (RM30), which sounds very interesting. When you order their martini or margarita (RM35-RM38), you get a dance shown in the video:

They also dance at 8pm nightly. Or during a birthday celebration. To add to the atmosphere of the Balinese bar, the wooden tables are imported from Indonesia. 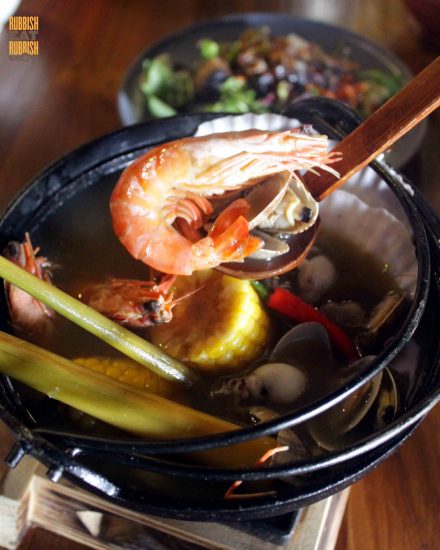 Different Naughty Nuri’s outlets offer slightly different menus, depending on what the chefs offer. The Singapore outlet, for example, offers Western food tapas, but at this Sutera outlet, they offer more Indonesian/Malaysian fare.

The Fisherman soup (for 2, RM38), for example, is not the Western milky style. It’s the Asian style, chockfull of seafood goodness. The seafood is fresh and the soup very peppery. It’s a tad too salty, but I didn’t mind it. 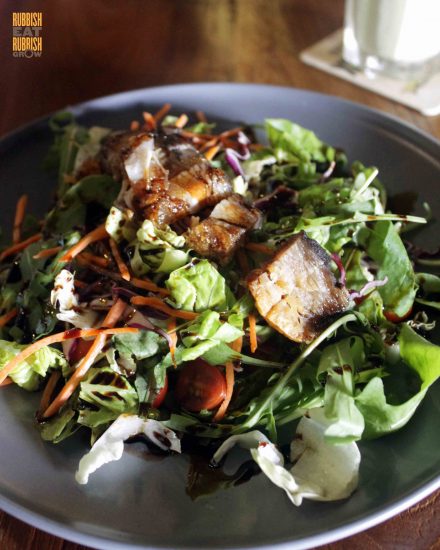 The sio bak salad (RM22) is ok, doused in a piquant balsamic dressing. But it’s not something I will order again. 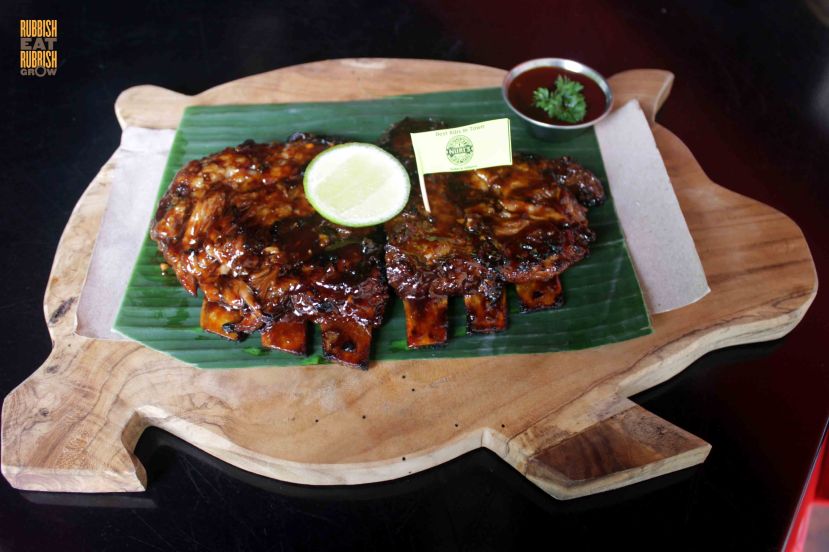 Now the meats! There are pork knuckle (RM80) and babi guling (RM328, 1 day pre-order). We, of course, went for the famous pork ribs (RM53). Naughty Nuri’s used to use baby back ribs but because of the scarcity, they switch to spare ribs.

Compared to Singapore’s outlet, the ribs here are less aggressive. Although I would have prefer more char, it has mild sweetness and the meat is tender but still moist. Very delicious. Everyone should just order a slab for themselves. 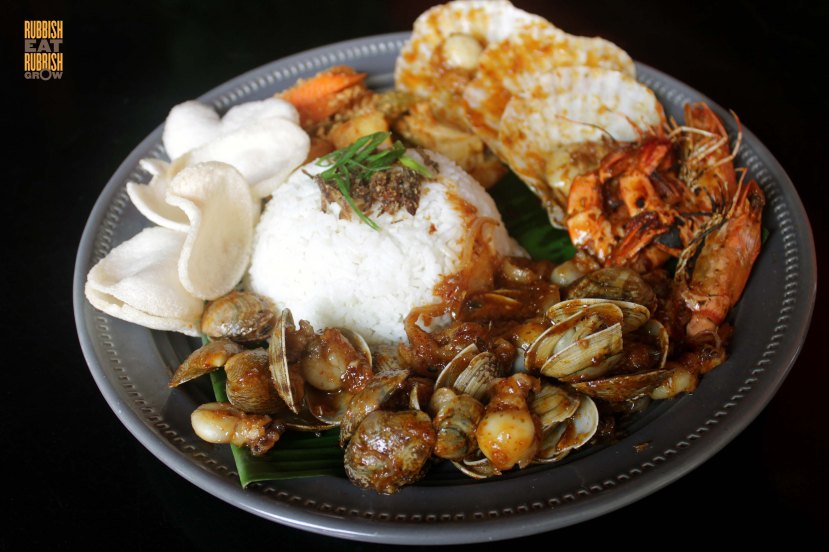 The Jimbaran seafood rice (RM40) is widely praised for the freshness of the seafood, and deservingly so. The chilli doesn’t overpower the seafood; instead, they add to the sweetness. 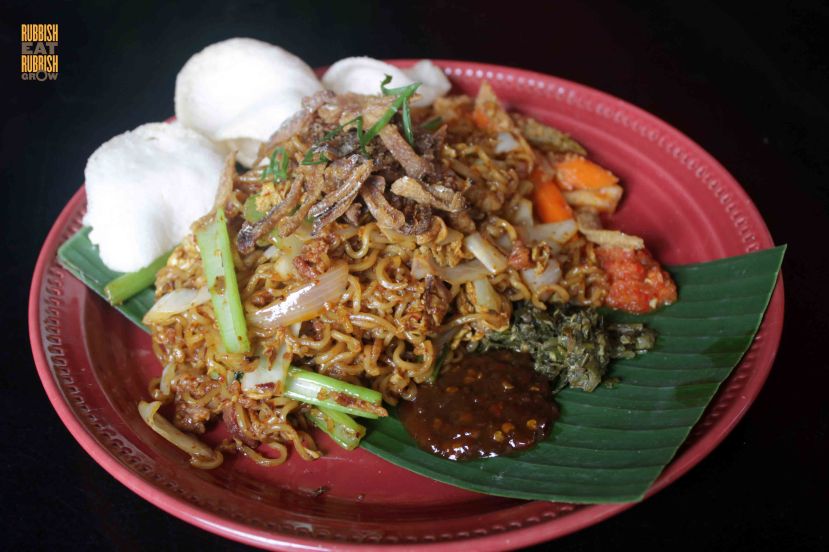 The ikan bilis in the Baliness pork mee goreng (RM 20) gives a nice almost lard-like crunch to the mee goreng, which elevates the dish. Chiobu the fire-eater warned that the chillis by the side are very spicy; if she says it’s spicy, I don’t even dare to try them. 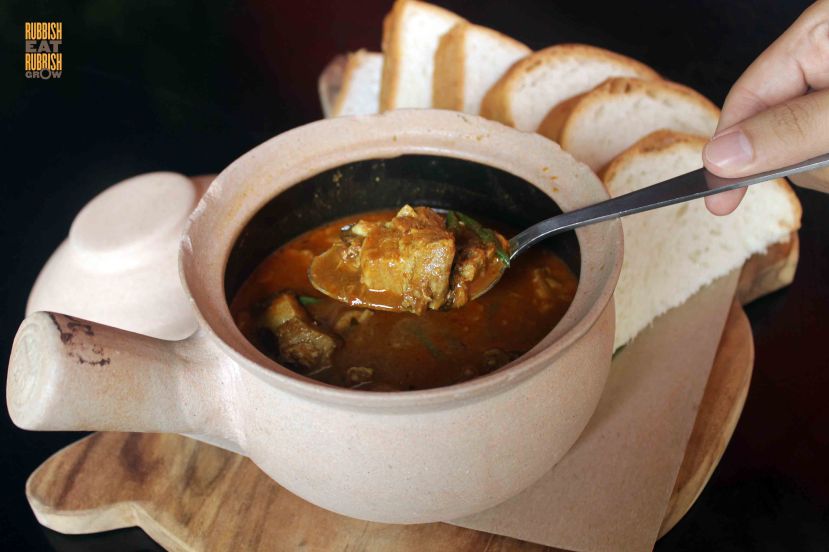 This is something different: pork curry with bread (RM 36) when we most of the time eat chicken curry. The curry is ok, but I thought the soft bread outshines it.

On the whole, this Naughty Nuri’s seems very fun, with much dancing and singing. The food is not bad and the ribs are fantastic. The price does seem premium when compared to other JB restaurants, but then, the ribs here cost half as much as in Singapore (RM53 VS S$36).