The Coffee Academics, Scotts Square: In Collaboration with Saucy, a New “Umami Up” Brunch Menu

Hong Kong-based The Coffee Academics’s first outpost in Singapore occupies a large corner space on the second floor of Scotts Square. According to the research and consulting firm, Frost and Sullivan, TCA ranked first in specialty coffee in Hong Kong in 2017. Saucy has recently collaborated with TCA to create an Umami Up Brunch menu, offering an iced yuan yang latte and eggs benedict with two contrasting flavours ($30 for the set menu, ends 31 July).

Yuan yang is a mix of 30% coffee and 70% tea, a personal favourite when I want the subtlety and booster of caffeine in a sweetened milk tea. The iced yuan yang latte is addictive – a perfect concoction of the Tea Academics Blend and the TCA House Blend. Chinese pu-er tea leaves line the foam atop the drink. The underlying sweetness, which I initially thought was honey, comes from the natural taste of pomegranate, used as part of the Tea Academics Blend. There is a  slight chocolatey note in the latte although none of the hibiscus. The medium-body roasted green coffee beans result in a smooth and mellow cuppa.

The eggs benedict comes with salted egg wafu sauce and century egg sauce. Proving consistency, both poached eggs have their yolks still runny. Chunks of crab meat lay under the salted egg wafu sauce. The salted egg yolk sauce is rather bland, and when we gave feedback, they explained that they wanted it to be mild so as not to overpower the dish.

The century egg sauce is a rare sauce to use in Eggs Benedict. The shrimps, used in this egg ben, are firm with a bit of a crunch. It tastes like pei dan sau yuk juk (Cantonese for lean pork with century egg porridge) at a Hong Kong dim sum eatery. 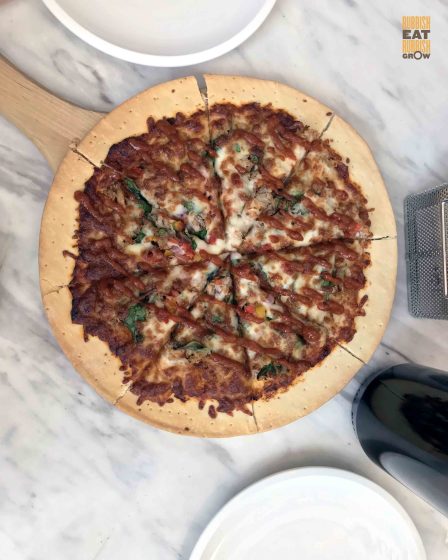 The Coffee Academics has several new items on their ala carte menu, one of which is the chilli crab pizza ($24). The crust–more like pita bread–looks pale and rather hard in texture, almost like a semi-biscuit; indeed, it is neither the thick, fluffy dough nor the thin, flaky base that other pizzerias offer. However, the rather spicy chilli sauce goes well with the crab. I wouldn’t be keen to order it again, solely based on how disappointed I was with the crust.

The gai daan zai, also known as egg waffles or egglets ($19) , is a very popular street snack in Hong Kong. Here, the honeycombed waffle is topped with mango cubes and a scoop of milk tea gelato, drizzled over with salted egg custard sauce. The gelato is creamy and smooth, rich and yet you can easily distinct it from the salted egg custard sauce’s flavour. The mango cubes provide a tart balance to the sweetness and saltiness.  Unfortunately, the egglet itself is overcooked and hard when it should have been crispy and fluffy.

This is my second visit to The Coffee Academics since they opened in late 2015. I remember being impressed by the staff’s knowledge of coffee back then as I am with them now, but the food was mediocre and the service was slow even though they seemed to have more than enough staff. Fast forward two years, although the quality of food has marginally improved and the standard of the meal hovers slightly above the line of being satisfactory, I will not feel like I am missing out if I don’t dine here again. Just coffee will do.

Written by Clancie Ng. Clancie is curious about the gastronomic world and will try almost anything at least once. She believes in the yin and the yang of striking a balance between being a glutton and working off the calories.