SENS Sushi & Grill, Holland Village: When I Maki in the Summer

Located at the basement of Raffles Holland V, SENS by Chef Martin Woo is a Japanese restaurant that is part of the modern retail and dining concept of Taste, a gourmet supermarket. The restaurant serves an array of Japanese dishes, ranging from sashimi to teppanyaki, all of which can be enjoyed with imported craft beers, wines and sake from Japan. Despite the extensive menu, Head Chef Kent Seah introduces several new dishes to welcome the summer. 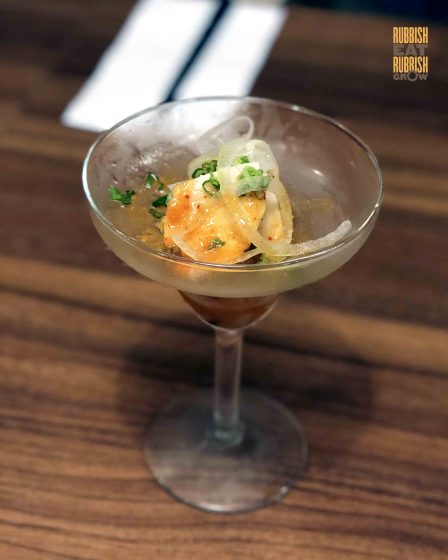 SENS’ new appetiser comes in a cocktail glass. Kajiki Tataki ($12) is primarily thick slices of mekajiki (swordfish) in a tangy sauce, topped up with thinly sliced radish and chopped spring onions. Tataki means ‘lightly seared’ and in this case, the sashimi slices are skilfully seared on all four sides while keeping the centre semi-raw and pink. I can taste a slight smoky flavour and the texture of the meat remains fresh and firm. Thankfully, the sweetness of fish is not overshadowed by the sauce, which fulfils the role of the appetiser very well. 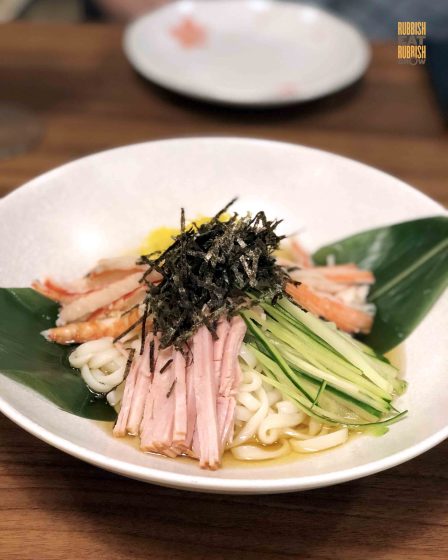 Chuka Udon ($16.80) is also served cold in a light and refreshing broth with strong citrus notes. It is like a noodle salad with the company of julienned cucumber, champagne ham, crabmeat, egg and prawn. The udon is a little overcooked, but otherwise, this is a delectable dish. There are many health benefits in eating wheat flour noodles so it is totally fine if you want to finish the entire bowl yourself.

There are three new maki onboard and all of them are powered up by specially concocted sauces.

The key ingredient in Umami Maki ($17.50, pictured above) is foie gras, which is wrapped with rice that is seasoned with furikake. It is further supplemented with avocado and heap servings of tenkasu and tobiko. If I have to describe a characteristic of this maki, it is generous. There is so much of everything, it is delicious indeed. The downside to this generosity is that I could not taste the foie gras very well. The gamut of flavours addled my taste buds. I prefer foie gras seared and served plain so that I can relish it in its original full flavour.

The highlight of Sugoi Maki ($15.50) is the century egg sauce. Century eggs are known to have a very strong flavour and pungent smell. They turn the heads of many and only appeal to some. The chef has adjusted the intensity of the century egg flavour in the sauce so well that it goes swimmingly with the salmon, scallop and king fish in the maki. Even a fellow diner who is not a fan of century eggs finds it palatable. I dived in for second helpings without much persuasion. 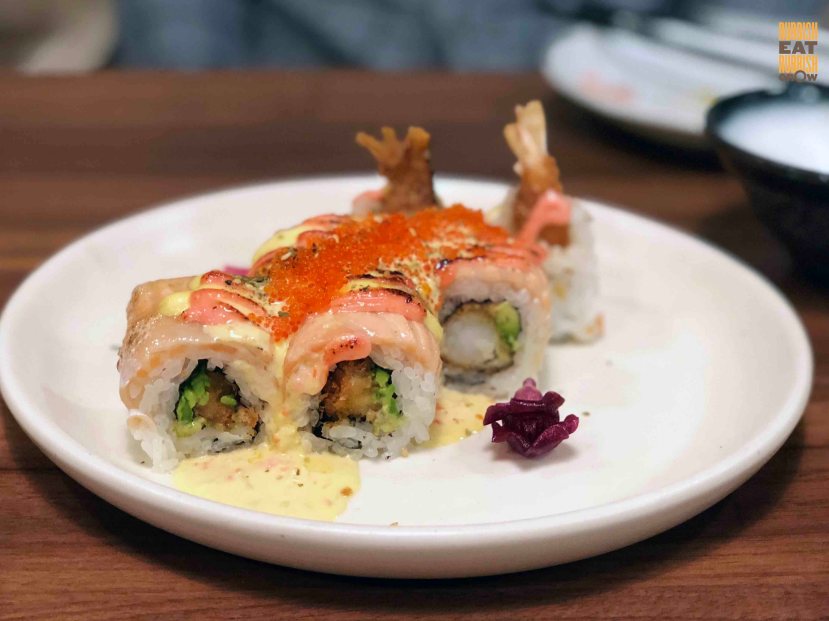 Oishi Maki ($17.50) is probably the foolproof brother of all the three maki. The main filling of the roll is ebi fry and avocado. Wrapped with aburi salmon, the maki is topped with tobiko, mentaiko and well drizzled with sweet apple cider sauce. This is the maki you order for friends who are less adventurous with their food.

The new swordfish appetiser and udon are remarkable and are definitely worth trying. The trio of maki are made up of quality ingredients that are bound to be crowd-pleasers unless you are not into strong flavours. The copious amount of tobiko on every maki renders the existence of soy sauce unnecessary, which is good thing!

Written by Cheang Shwu Peng. She used to be able to eat for three but we know that age catches up on everyone, she is now only able to eat for two. She also does not have the habit of sharing food unless it is necessary.