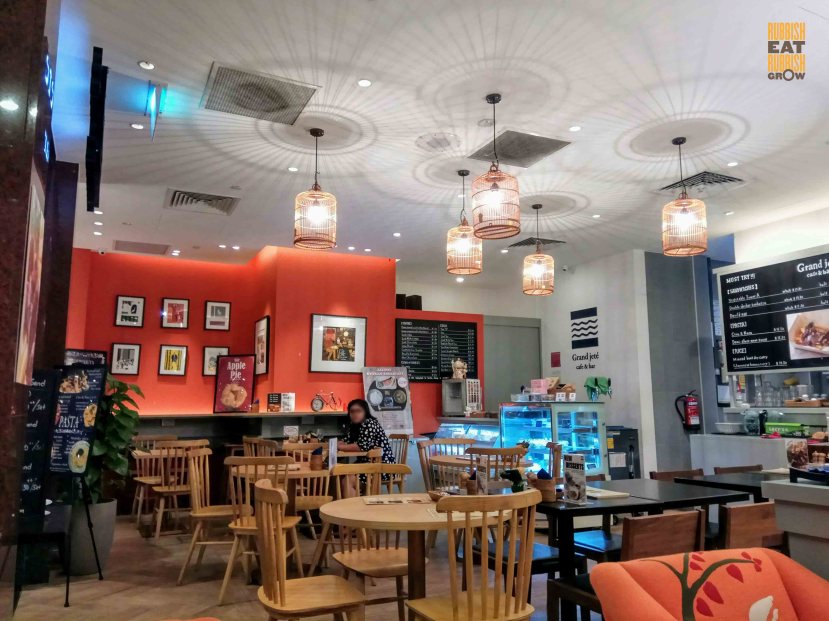 Named after a ballet jump in which “a dancer springs from one foot to land on the other with one leg forward of their body and the other stretched backwards while in the air,” Grand Jeté Cafe is located at a hidden corner of Ngee Ann City (you have to check the directory to get there). They take pride in their Japanese-Western dishes such as sandwiches, pasta, salads, rice dishes and desserts. It offers dine-in and takeaway promotions for its sandwiches (sandwich set with coffee from $8.90++ onwards and sandwich set with soup from $9.90++ onwards). In front of the semi-open kitchen, there is a tray of mixed vegetables and a signboard declaring that the vegetables used in the cafe are from Japan.

The server was friendly but he was not as attentive as I thought he would be, considering that it was not busy in the café. However, since he is cute, I forgive him.

The cute Japanese waiter recommended the minced beef dry curry (Japanese keema curry, $14.50++) which consists of minced beef, long bean, carrot, tomato, potato, and onsen egg. The onsen egg is thick, wobbly and custardy. However the spices in the dry curry overpowers the dish and I could not taste the vegetables. The dish lacks texture and would be better if the vegetables have more bite to them. There is some heat from the curry, which is unexpected of a Japanese curry. The rice hailing from Niigata, the rice capital of Japan, is lovely: sticky and fragrant.

The popular double decker tonkatsu sandwich comes as a whole ($13.80) or half ($7.40). The portion is sizeable, served with a side of four chips. The pork cutlets are thick and tender. However, they are not crispy and a tad too oily. The buttered bread is fluffy and delicious. The sandwich would be better if there are more cabbage and sauce. I would also prefer to have more mustard to undercut the richness of the pork cutlets. The four potato chips are thinly sliced, nicely seasoned and crispy. Sadly, the cafe is not as generous with the chips as with the pork cutlets. One can never have too many chips. I guess, Japanese vegetables are expensive.

My eating partner and I both agreed that the Asari clam and mixed mushrooms pasta ($15.50++) is overly salty. That said, the spaghetti is cooked al dente (yay!). According to the menu, there are 4 different kinds of mushrooms (which may be shimeji mushrooms, brown button mushrooms, baby oyster mushrooms… couldn’t pick out the fourth one). The mushrooms lend the pasta an earthy flavour which goes well with the Asari clams.

The highlight of the meal is definitely their apple pie (their signature) which is freshly baked in-house ($3.40++; with a scoop of vanilla ice cream, $6.50++). Pieces of Japanese apple are wrapped snugly in a warm all-butter flaky pastry. It is a lovely contrast when served along with a cold scoop of sweet vanilla ice cream.

On the whole, Grand Jete Cafe serves satisfactory food at reasonable prices along Singapore’s shopping belt. Shielded from throngs of people in Takashimaya, here lies an oasis to get away from the hustle and bustle. If one is tired from all that shopping, this is one place to go to recharge. We spent $64 for two persons.

You may be interested in…
–Clan Cafe at Straits Clan, Bukit Pasoh: Chichi Cafe, Men with Straw Hats and Thin Women in Loose Blouses
–Old Hen Kitchen, Owen Road: Good but Only Really Requires One Visit
–Good Thyme Bistro, AMK: We Don’t Even Have to Try/ It’s Always a
–Thus Coffee, Upper Thomson: Renews My Faith in Cafes