Designed with classic East Palace in mind, Feng Wei Ju 风味居 (FWJ) at StarWorld Hotel Macau has a gold bar (as in alcohol bar counter, not a gold bar), gold curtains, and gold everything. The decor is gaudy and my friend, whom I sent a photo to, asked if I was in a wuxia brothel. Veteran chef Chan Chek Keong with 25 years of experience helms the kitchen, winning multiple awards, including, of course, two Michelin stars for FWJ.

Amuse bouche: plum tea and a pea. Their specialty, wheat tea, is nice but comes across as heavy after a meal.

If you come singly or as a couple, FWJ may have space at the bar counter for you, but as a group of 4 and more, it is best to make a reservation because the staff turned people away at the door even at 2pm. I came alone and sat at the counter. The service was swift and polite but they did not distinguish themselves from any nice Chinese restaurant.

The beef tenderloin in lotus paste 荷香酱牛肋肉 (168MOP for 4 pcs / 336MOP for 8pcs) is marinated in Hunan spices and sauces. The chefs then use a traditional Chinese cooking method that requires three hours of constant tending and adjustment of temperature. As a result, the beef comes across super tender and thoroughly marinated—almost like the common Chinese stewed beef in soy sauce, except that this has a myriad of spices like star anise (maybe?) and (perhaps) cinnamon. By itself, it can be a little monotonous, but there is a homemade mala chilli which adds depth to beef. The spiciness and numbness strike first before mellowing down into the complex taste of spices in the beef. Outstanding.

Another signature dish, braised pork belly “Mao” style 毛家红烧肉 （188MOP), comes in a gigantic claypot, almost urn-like with lion heads for handles. While the claypot is huge, there is a bowl within, about the size of two large hands cupped together. On top, there is a layer of pork belly, but not the whole 1.5 inch, but only the rind and the fat. This pork belly has some cloves of garlic; and beneath this layer is a bedding of mushrooms (I think it’s hon shimeji) in a mala sauce. The pork alone is not as tender as it should be and worse, it is too gamy and “porky” and, to me, repulsive. The garlic is too sharp but because it is unbroken, it doesn’t ameliorate the pork’s gaminess. Only when everything is mixed together does the mala lessen the stench of the pork. But still, it has become unpalatable to me and I left more than half of the dish untouched. 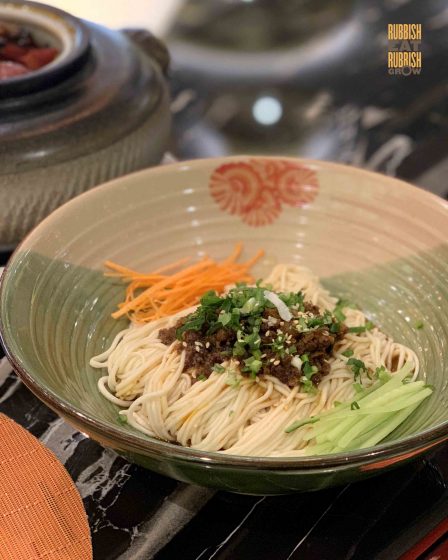 FWJ is also known for their handmade noodles and the server recommended me the Sichuan dan dan noodles (72MOP), which is big enough for two to share. Here, the dan dan noodles is dry, without soup, and this is the authentic Chinese style, which means there is no peanut butter. Shucks, I like peanut butter in dan dan noodles. The noodles are not bad but not exceptional. The mala flavouring here is good, just nice to tantalize, and as a background to introduce other flavours. It’s good, but not impressive.

FWJ pales in comparison to Shisen Hanten in Singapore, which also received two Michelin Stars. I find the decor a little tired, and the staff a little casual. It’s the sort of restaurant that you can walk in without needing a special occasion, that is, it’s the sort of restaurant that won’t add a memory in your life, but foodwise, it does okay. I spent 530MOP for one person.

There is a smart casual dress code here: no sleeveless, no shorts, and no open-toed sandals and slippers.

You may be interested in…
–The 8 Restaurant, Grand Lisboa Hotel, Macau: Three Michelin-starred Contemporary Cantonese-and-Huaiyang Restaurant. It’s a Zoo in Here!
–Chef Kang, Little India: Should Have Gotten 3 Michelin Stars
–Crystal Jade Golden Palace, Paragon: They All Laughed (at the 1 Michelin Star)
–Summer Palace, The Regent: One Michelin Star