My kind RERG boss said ‘Hey I always see a long queue at YUN NANS at Jewel and thought you might like to skip the queue and go for this tasting.’

Despite its queues, I’ve actually not heard of this place before but I’m always game to skip queues and try new foods. So off I went to what was my second experience of Yunnanese food. The first was somewhere in Jalan Besar – one of those old, musty-smelling, traditional restaurants with Oriental scrolls of embroidery rolling off walls, knickknacks of trinkets lying on shelves, tables and somewhat sullen Auntie guarding the cashier. The food at Jalan Besar was great – oily, spicy, full of flavour but expensive.

Yun Nans having opened over 150 outlets is of course in an entirely different league. The restaurant feel is modern, chic but casual. The food is well plated and of course delicious too. 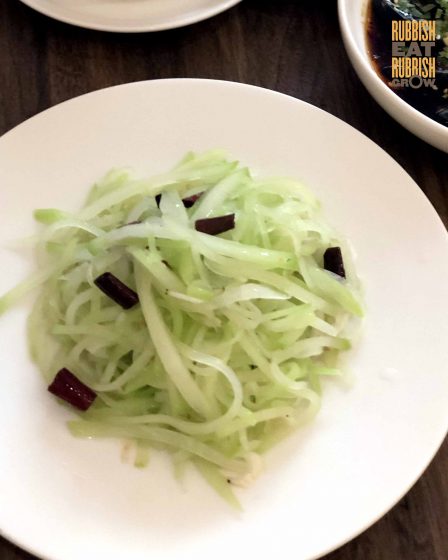 When they said that we were gonna have Fried Chayote with Dried Shrimp (S$11.90++), I was like oh so interesting, never had that before and it came and it was well, Buddha’s Palm Squash or more commonly known to me as 佛手瓜. This is light, crunchy, shrimpy, mildly spicy. There is nothing to hate about this appetiser. Great start to the meal. 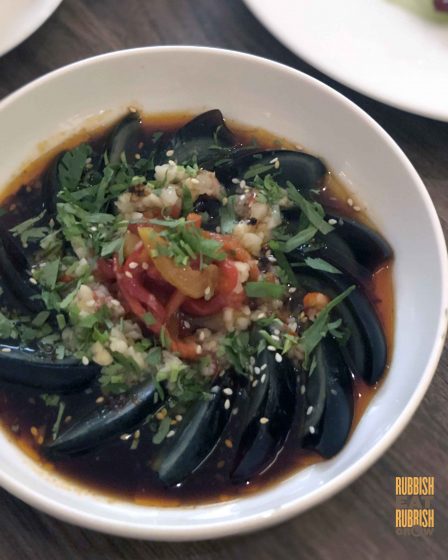 The other equally delectable appetiser is the Century Egg with Grilled Capsicum (S$6.90++). Theirs is a 溏心皮蛋 – basically century egg that has a gooey centre. This is my favourite kind of century egg. And theirs isn’t pungent at all. Spicy, fragrant with a slight punch from the fermentation. They can afford to add more of the grilled capsicums since they do add a desirable sweetness to the dish. 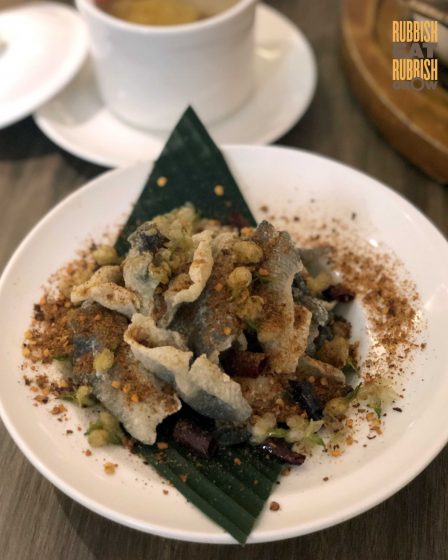 The Spicy Fish Skin with Jasmine Petals (S$6.90++) is a bit of a misnomer since I’m quite sure no one has tasted the jasmine in it at all – not when it’s paired with a ‘potpourri of traditional Yunnan spices’ (as the description puts it) all of which are earthy, spicy and robust and can easily mask the jasmine. Fried fish skins are a dime a dozen these days and while this is well-fried, crispy with a hint of mala, you can probably get the same at Irvin’s since they have mala flavour now as well. 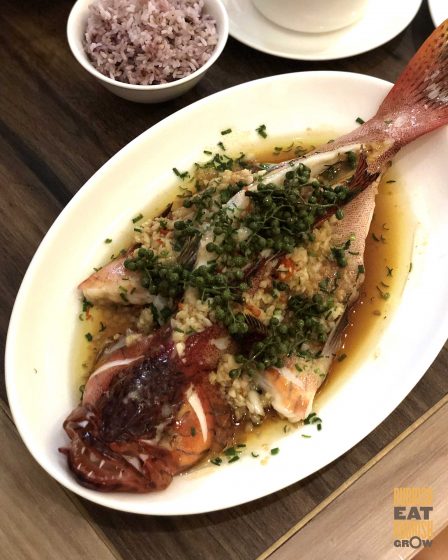 My favourite dish of the night is the Steamed Red Grouper with Green Peppercorns ($48.80++). To be honest, I don’t taste much of the peppercorns but the fish is sterlingly cooked. Moist, oily, tender meat that yields a comparably rich texture that cod does. And the accompanying soy-based sauce is fragrant and garlicky. Super nice. This grouper is apparently imported from Yunnan.

My only problem with this dish is the price tag. It is expensive. I’m not sure you can’t get similar for less at any good zichar stall with the Hong Kong Style steamed fish, just ask them to up the garlic. But if you’re at Yun Nans and feel extravagant, this is definitely a dish to go for.

The only mediocre dish is the Yun Nans Signature, Double Boiled Chicken with Red Mushrooms ($29.90++, small; $38.90++, large). It honestly doesn’t taste particularly of anything. Just a little light chicken broth. Good if you’re ill, I guess. It could be that the stronger flavours from before have overpowered anything this soup is meant to offer. Thought it must be said that the red mushrooms here are priced at $400/kg. So I suppose, it’s one of those bird’s nest like delicacies that don’t taste of much but must be really nutritious since it’s so expensive.

The Poached Pork Collar with Pickled Chilli ($16.90++) and the Stir Fried Wild Porcini Mushroom with Dried Chillies ($24.90++) are both really delightful additions. The first is a porky stew with potato slivers that are crunchy (so probably a quick fry like the Sichuanese 土豆丝 or potato floss), mochi-like potato starch noodles and pickled mustard leaves (kiam cai). The robust and spicy dish is really comforting and rich without being overly unctuous.

The second dish is fried generously in oil and chilli which is really just the way I like my Chinese food. I did think it could’ve done with more salt to bring out the earthiness of the mushrooms considering its price tag. Small sayang here. 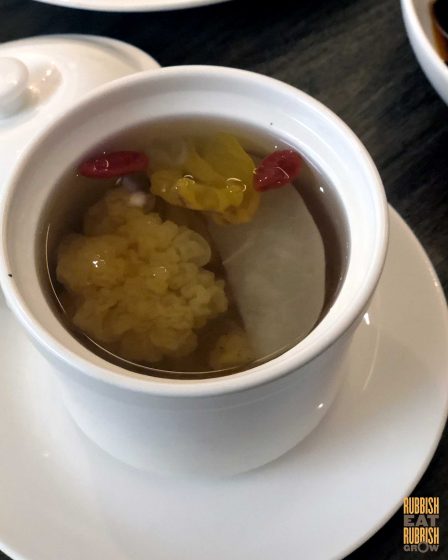 Their dessert, the Double Boiled Pear with Golden Fungus and Snow Lotus (S$5.90++), is sweet and nourishing. I particularly like the golden fungus which is brainier-looking then white fungus. It has the buttery texture of hashima but without the gross factor.

Written by Paul Ng. Deathrow meal: steamed uonuma koshihikari rice, sunny side up eggs drizzled with slow-rendered pork lard, kicap cair dark soya sauce with a side of gribenes. And a bowl of uni. Aspiring taitai. Also co-owner of Provisions Food – local maker of baked goods, snacks, condiments and sauces inspired by the flavours of Asia.