The Dragon Chamber, Circular Road: “You Know You’re Hungry for That [Crocodile] D***”

The Dragon Chamber near Boat Quay serves a dish called “D*** soup” made from the crocodile penis. But let’s rewind.

The Dragon Chamber by the Tunglok Group used to be housed within Lokkee, but now is a speakeasy Chinese restaurant within a kopitiam. You’ll have to push past a fake fridge to enter the sexy premises. See video above!

Like Lokkee, they serve American Chinese food, as indicted by the decor. 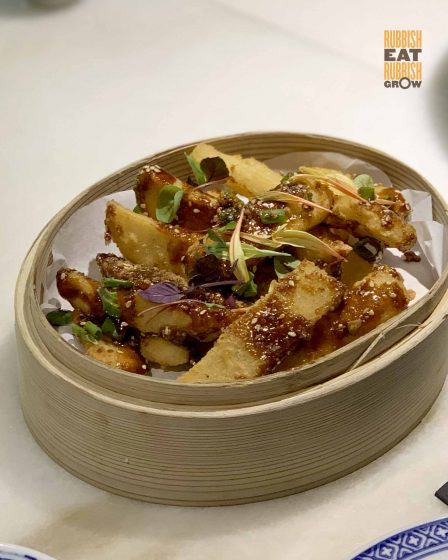 I like the chunky texture of the mala fries ($10), because it fills the mouth. I can’t really take spicy food, but this one just hits my threshold, making it palatable.

The firecracker chicken ($30 big) is a twist from la zi ji (Sichuan pepper and dried chilli fried chicken). Here, they serve it together with you tiao (fritters) drizzled with maple syrup. The you tiao serves to undercut the rather spicy chicken–smart and delicious combination.

The dragon claw ($55) is rather scary. It comprises of crocodile foot braised in herbal sauce on a bed of kale, served flaming. It’s scary partly because you have to risk your hands through the flames to get it, partly because it looks like a human palm with handbag crisscross lines.

My parents relish it. It’s not bad–full of collagen, meat tastes like chicken, skin tastes like fat similar to pork trotter’s. But I still cannot get past the visual image and could only eat one or two mouthfuls.

We ate a lot of crocodile that night, including the penis. On the menu, it’s called “D*** soup” ($30): “You know you’re hungry for that D.” It’s a chicken and pork herbal soup boiled 6 hours with crocodile penis. 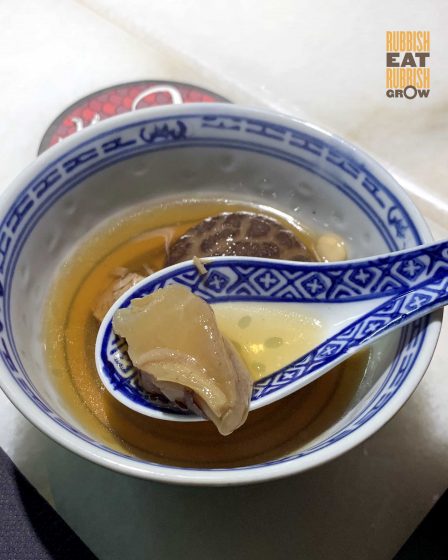 My mom likes it, but I find it weird because it is indecisive; it’s too sweet to be Chinese soup, yet it has savoury elements. There are few traditional Chinese soups that are sweetened with red dates: lotus root soup, and watercress. So this overwhelming sweet pork-based soup is out of script.

The stir-fried kale ($20), which is my most hated vegetable, with garlic is such a surprising delight. It has lots of oyster sauce, covering the bitterness with sweetness and umami. Excellent.

The dish of the night is indubitably the wagyu beef horfun ($68), very costly for a tiny portion that we had to go Game-of-Thrones mode to snatch for it.

It has a deep, intense, superb wok hei. The A4 Kagoshima beef is so tender, and the hor fun is mixed with deep-fried crispy hor fun, allowing for texture. Best of all is the truffle gravy: the usual hor fun gravy infused with truffle so that you can see a galaxy of speckles on the hor fun. It’s expensive but also must order.

For desserts, the fried durian with popping candy ($16) is a disappointment – the durian quality is inferior. Better is the red bean pancakes with salted caramel ice cream ($19), an unlikely but delicious couple.

I am so over speakeasy places–they seem jejune. But Dragon Chamber is really fun, and I was excited to enter the neon restaurant. Except for the fried durian and dick soup, the food is pretty fantastic. It’s overpriced, no doubt, but I’d return as long as it remains fun and the food maintains the standards. Next time, I’ll try less gimmicky stuff.